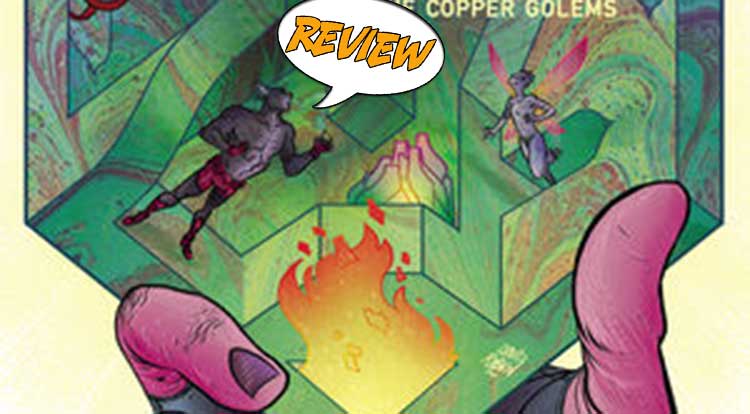 Boone Dias has gathered his adventuring party – Glum, Violet Belle, and Grandor – and they head off to close the first of the holes that lead to Earth. We follow them into a volcano, meet the wizard Agrippa, and learn just how outrageous Grandor is in this week’s Ether: The Copper Golems #2 from Dark Horse Comics. Previously in Ether: The Copper Golems:  Boone Dias meets his adult daughter, whom he has not seen for years when the agency they both work for catches him and wants him to solve a problem with holes that connect Earth with the Ether, a highly magical world. As quickly as he catches up with his family, he leaves them – again – to return to the Ether, where he gets together with a few friends, Glum (the gate guardian) and Violet Belle (an ill-tempered fairy currently with no access to spell-writing). Together, they break another spell-writer from prison, and then the guard dragon shows up.

WE THOUGHT BOONE WAS THE CRAZY ONE LAST ISSUE

Ether: The Copper Golems #2 continues the story of Boone Dias as he travels through the Ether, attempting to close the holes between there and Earth. While last issue set up the dichotomy of the two worlds Boone travels through, this time it’s all about the Ether. The storyline is pretty straight-forward and energetic. Grandor set up a few decoy golems so they could get away from the dragon and we learn a bit more about him. He was in prison for something epic, and is not in the least contrite about it. But he’s also someone who likes to help the little guy now and then.

Boone has a map that shows where the holes on Earth connect to locations in the Ether. The first location is in Latium – the roots of the myths about ancient Rome. This comes with considerable exposition by Boone explaining how the Ether is powered by the ideas from all the myths, legends, stories, etc. from Earth. This is vital to understanding the story, and it is a data dump charmingly presented against the attitudes of the other characters who basically don’t want to hear it. Boone leads them to the place, which is also where Agrippa, the most powerful wizard in the Ether, lives, which is in a volcano, and Grandor rushes in because he’s bored.

The set-up is perfect for their encounter with a horrible Ether version of the wolf who fed Romulus and Remus. This wolf is large, flaming, and feeding a host of weird creatures. And there is more than one of them, but between Boone and Grandor, they dispatch them handily. Then it’s up to Agrippa’s house. Already in this book we have a theme of things defying stereotypes, and Agrippa not only doesn’t disappoint, she is utterly frank about doing so. She likes riddles, and what Boone delivers is a logic puzzle. When I get a chance, I am going to work it out, because Kindt does not spoil the answer until the last page. They are granted access to the volcano, with fifteen minutes before it is set to go off. There’s only one thing in their way – a giant mechanical spider, which terrifies everyone. Except Grandor. He thinks it’s awesome and jumps in.

COLORFUL, TRIPPY, AND FULL OF DETAIL

We are in the world of Ether: The Copper Golems #2, so the art is pretty wild and the colors are intense. I am viewing a review copy, and I really want to see this as a book because there are some two-page spreads that read across the pages, and I think that art will really be something. There is good use of small inset panels, such as when Boone is lecturing, but also for zooming in on small details along the adventure, or to going through several close-ups in quick succession. Agrippa’s house is reminiscent of M. C. Escher’s art. And the weird volcano scenes are like something from a video game jumping puzzle. The use of color is fabulous, but then I do like vivid colors. Color is also used in the lettering – Violet Belle speaks in purple; Grandor in blue and Agrippa’s text coordinates with her colors.

This a book to read, and then go back and look at again. There are so many little things in the art – all the crazy denizens of the Ether we see along the highway and at the gas station – cars with wheels and legs, the smoking gas station attendant. The “bird” that Glum hires for transportation is yellow. With black and white checkerboard trim. That says “Taxi.” There’s a fun sequence where Grandor lights a cigarette that is green, has a face, and apparently screams. This pays off later, and we find out they are Shoggoth Smokes. Yes, we get a little H. P. Lovecraft reference here.

BOTTOM LINE: A BIT WEIRD, BUT INTERESTING AND CLEVER

If you haven’t read the first issue, you can probably jump in here and not get totally lost. The Ether is a strange place, full of magic, but not your stereotypical fantasy world. It is well worth reading Ether: The Copper Golems #2 for some of the twists it puts into the tropes we expect, and the interactions between smart, yet flawed, characters.