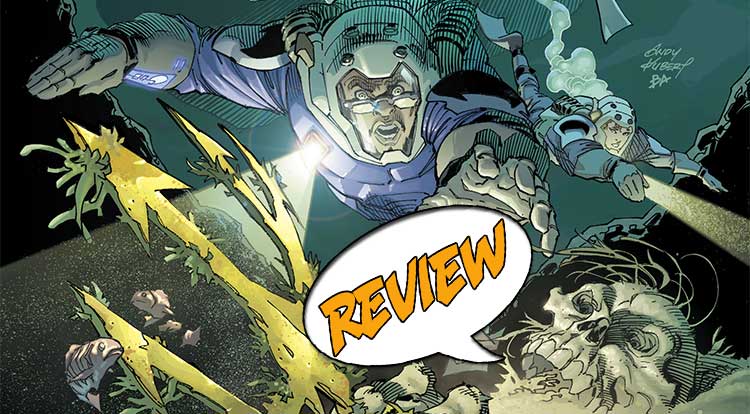 They have been selected to be a continuation of a long tradition. Their lives, and deaths, have been preparing them for this moment. Now, out of the mountain and on their first mission, will this new team be up to the challenge? Let’s find out as our group of adventurers literally dive into this latest issue, New Challengers #2 from DC Comics! Previously in New Challengers: Freshly plucked from their deaths, Trina Alvarez, Moses Barber, Bethany Hopkins, and Krunch are recruited by the mysterious Prof to the latest members of The Challengers of The Unknown. Once they leave their mountain base, their lives last only as long as the time on their hourglass tattoos, and they already have a mission. But who is the mysterious Prof, what is he preparing for, and how do our heroes tie into it all.

We pick up this issue with a view of Challenger Moses Barber and what happened to him in the moments before his death. A computer hacker, he was on the trail of uncovering a dark secret, one which many have future ramifications regarding his current situation. We will see his death, but before that, we are thrust back into our main story.

Last issue, moments after arriving in the ocean to track down and retrieve their objective, the team found themselves under attack from a giant crustacean. Using some of his mysterious tech, Prof “uploaded” the team high-pressure diving suits. This enables them to fight the monstrous fugitive from seafood buffet in its own element. Only moments after they submerge, they find themselves receiving assistance from guest-star Aquaman and a pod of whales. However that assistance is short lived as the King of the Seven Seas finds himself overwhelmed by images from the past, and the Challengers must face off against a virtual army of undersea soldier-types, all with mysterious bandages covering their visages.

Do they succeed in their mission? Well, you just have to pick up the issue to find out. Here’s a hint, the last page? It’s a whopper!

While New Challengers is being published under the Dark Nights Metal flag, I did not really need to know anything about that series to enjoy it. The origins of these members are being revealed organically, and the mystery surrounding their benefactor and his possible connections to the past, or future, really makes for an enjoyable tale. Continuing the format from last issue, which featured the events leading up to Trina Alvarezes’ death, this issue focused on Moses Barnes and gave his death and the actions after it, the spotlight. There is some foreshadowing in his story that makes me eager to see where his actions will lead the team.

Besides the adventure aspect, the Challengers of the Unknown have always been connected with mystery. If it was the mystery of their current adventure or a mystery that was only hinted at, it almost always made for an enjoyable, if underrated, read. This issue is no exception to that established pattern. Scott Snyder and Aaron Gillespie have written a fast-paced tale which keeps you interested and they throw just enough at you to have you asking for more. Some sequences seem to point to the larger aspects of Dark Nights Metal as an overarching story, but I don’t feel you have to really know or follow that story to enjoy this one. Hopefully, that feeling will remain in future issues.

On the art side, Andy Kubert and Klaus Janson are legends in their own rights. Here they expand that status with great art and great design. There is not a lot else to say on their contribution, other than it is a welcomed one.

BOTTOM LINE: A SPECTACULAR CONTINUATION OF A STORIED LEGACY

I challenge you to find a reason for New Challengers #2 from DC Comics not to find a way into your read pile.

A fun and imaginative modern interpretation of one of the great legacy teams from DC Comic’s expansive history. By for the concept, stay for the story.