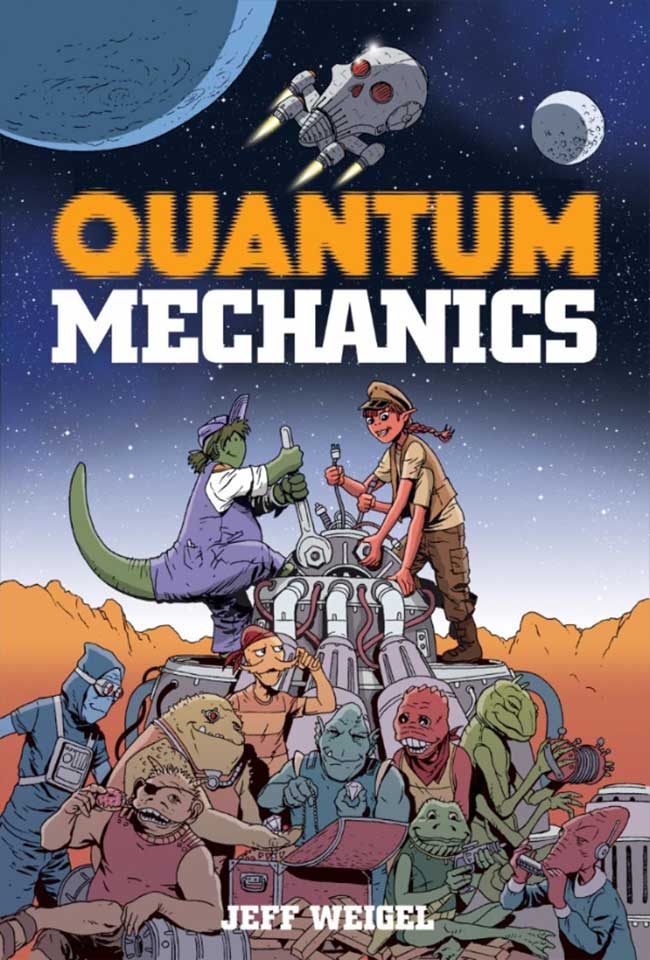 As the library world descends upon New Orleans this week for the American Library Association’s annual conference, the most talked about graphic novel publisher unveils plans for the first title under the Caracal banner.

“Quantum Mechanics was one of my very first acquisitions at Lion Forge, and I’m so glad its publication is coinciding with the launch of our new Caracal imprint,” says Andrea Colvin, editor in chief. “Jeff really knows middle-grade readers, and with this story he’s created a deeply fun and exciting science-fiction world in which girls get to save the day with their knowledge of mechanics and engineering. This is the space adventure we all need!” Growing up on her father’s salvage yard on a remote, barren asteroid, Rox has always wanted to experience more of the galaxy. Her best pal, the natural mechanic Zam, has always wanted better spacecraft to tinker on. When a space hauler arrives one day with a broken tractor beam, the kids think this might be just their chance to earn some money to repair one of the junked spaceships and set out on adventures. But when it turns out the captain of the hauler is none other than the dread space pirate known as Red Myk, adventure is exactly what they get!

After being kidnapped, Rox and Zam encounter a group of down-on-their-luck space truckers, forced into piracy after a shipping conglomerate took control of a wormhole and effectively put an end to transport operations in that region of space. A final confrontation with the shipping conglomerate will force the two to make decisions and alliances that will directly affect the future of their quadrant of space.

“I’m thrilled to have my book, Quantum Mechanics, coming out under Lion Forge’s Caracal imprint,” says Jeff Weigel. “It was a great experience working with my editor, Andrea Colvin, and with the other editorial and production folks there. I think Lion Forge’s approach to publishing represents the future of the comics industry, and I’m proud to be a part of it.”

Quantum Mechanicsis written and drawn by the Parents’ Choice Award–winning author, Jeff Weigel, and will be the first title under the publisher’s Caracal banner for readers ages 8 to 12. This fun new book will be released in finer comic shops everywhere on October 10, and in bookstores on October 23.

About the Author:
Jeff’s latest book is a 192-page middle-grade graphic novel, Dragon Girl: The Secret Valley. It’s a ripping adventure yarn about a girl who discovers a hidden land of the world’s most mysterious creatures—dragons—and her mission to understand these strange beasts and safeguard them from an outside world that threatens to wipe them out. The Monster Alphabet, a children’s picture book by Michael P. Spradlin and illustrated by Jeff, was published in 2012 by Price Stern Sloan. The Monster Alphabet is an around-the-world tour of strange, funny creatures, with a different monster for each letter of the alphabet. Jeff’s children’s graphic novel, Thunder from the Sea, is published by G.P. Putnam’s Sons. It’s an action-packed story about a young boy’s adventure in the British navy during the Napoleonic War. Jeff also wrote, illustrated, and designed Atomic Ace (He’s Just My Dad), published by Albert Whitman & Company in 2004. Atomic Acereceived a starred review in School Library Journal and was a Parents’ Choice 2004 Recommended Award Winner. A sequel, Atomic Ace and the Robot Rampage, was published in the Fall of 2006. Jeff received a Don Freeman Award Honorable Mention from the Society of Children’s Book Writers and Illustrators (SCBWI) for his picture book work in 2004.