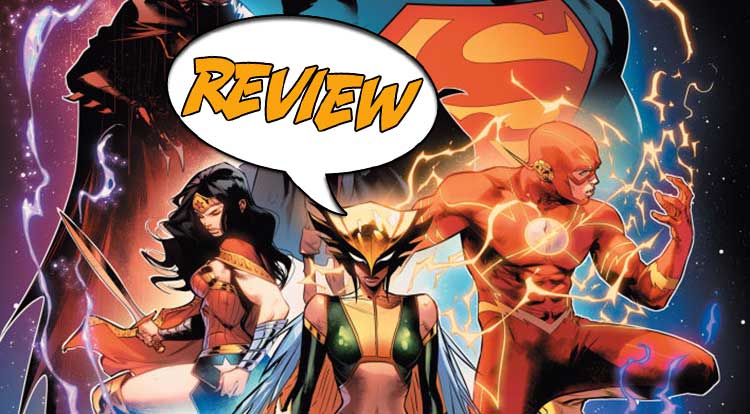 The energy source called the Totality has landed in the Nevada desert and is sending out a code. It’s locked behind an energy field and no one can get to it without being transformed. Only the Justice League has a chance of getting through! Previously in Justice League: Vandal Savage knew the secret of what lay behind the Source Wall, and was causing chaos across the earth with his band of highly advanced Neanderthals. While the Justice League, under the lead of J’onn J’onnz, handled that, the Totality crossed the universe from the Source Wall to Earth. As if that weren’t enough trouble, Lex Luthor and his Legion of Doom showed up in Vandal Savage’s lair to take over. Luthor tried to wrest his secret from him, but killed him in the process.

Justice League #2 starts out peacefully enough (well, for a page) as we flash back to Lex Luthor three months ago. He is in Kansas. At a Legionnaire’s Club. Which he has just bought. And filled with explosives. I enjoyed his grandiose talk interspersed with a bit of his inner monologue during this scene. He can be so convivial and so awful at the same time. But the point of this scene is his finding a door that no one else can see, with a special doorknob with glowing runes, and going through it.

We cut to John Stewart, Green Lantern, in the deep reaches of space, transporting a prisoner back to the Guardians. That prisoner, Greelok, starts talking to him about the Source Wall, the dark forces unleashed, sort of trying to get under his skin. Then, through rather ingenious means, Batman gets through with a message. The Justice League wants him on the team. They need his knowledge and his leadership skills. The Totality (which has taken the form of a huge head) is causing big problems on Earth, with the present one being Killer Croc who went in and came out changed, adapting on the fly with Kryptonite breath, for example.

Again, we have several intertwined plots. The Legion of Doom has possession of an old, secret underwater lair, so secret that Black Manta did not know of it. Lex Luthor reveals that he knows that to control the Totality, they have to unlock the seven hidden forces of the Universe. He’s unlocked once force, Sinestro is on his way to unlock another, and Grodd is partnered with a…baby? (I think I have an idea who!) And the Justice League, well, mainly J’onn and Superman, are going to breach the Totality’s energy field because they are the only ones who can withstand its pathogens. With Ray Palmer’s help, they have figured out a way to bring along two more people – and they choose Batman for his technical expertise, and, well, he’s Batman, and Hawkgirl for her experience with weapons and war. It’s a good way to break the team into a manageable component, and I think it will be an interesting grouping. And the Legion of Doom finds out that their Lex Luthor is a Lexbot.

But that’s not all for Justice League #2. Sinestro is in the deep reaches of space where he has unlocked the invisible emotional spectrum, and he comes to John Stewart to recruit him. And recruit him he does, for when we next see John, he is the leader of the Ultraviolet Corps, and filled with a burning hatred. I had thought the Lantern spectrum had pretty much covered everything, but if this invisible emotional spectrum refers to deep or hidden emotions, I can see a lot of good story potential there.  And where is Lex Luthor? He’s figured out a way to get through the Totality’s energy field too.

A GRAND STORY ON A GRAND SCALE

I really like the art in Justice League #2, and for a mix of reasons. When Lex Luthor is being smarmy, he looks totally smarmy, and the art really accentuates the dialogue. The same is true of the John Stewart scenes, when he looks rather brooding and deeply introspective. The baby looks like a happy baby (so knowing he’s apparently a powerful villain makes this feel so incongruous.) We travel from deep space to below the ocean, from Kansas to Nevada. The undersea lair has some almost Art Deco touches, which is really cool. And the coloring – the color is just luminous. Kansas looks hot and bright. Space has colorful backgrounds with high contrast lighting. Undersea has murky green depths punctuated by light. And as Superman and Batman enter the energy field surrounding the Totality, everything really looks high energy.

BOTTOM LINE:  A TANGLED WEB, BUT NOT TOO TANGLED

Justice League #2 is part of an epic story with a large cast. I think we’ve finally gotten through introducing most, if not all, of the players. There are more plotlines, but they have some threads tying them together. Unlocking the Seven Forces sounds like a typical epic plot, but even if it’s a MacGuffin, I am optimistic that it will set up interesting encounters in the issues to come.

More questions than answers as the plot thickens in Justice League #2!