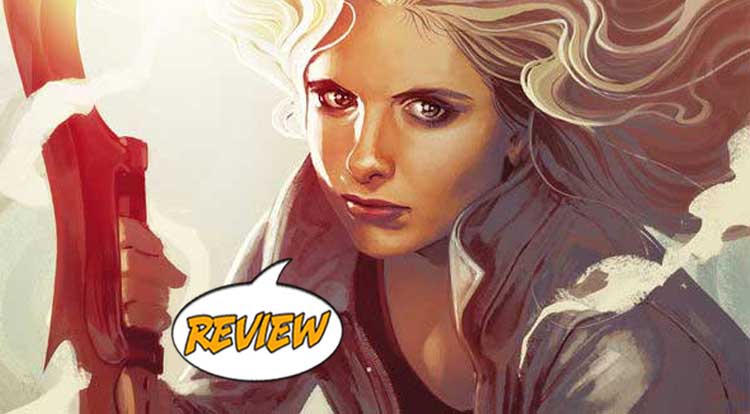 Buffy The Vampire Slayer Season 12: The Reckoning #1 (of 4) Review

A year has passed since rogue government forces tried to enslave all magical beings and steal their power.  What has the Slayer been up to in that time?  Your Major Spoilers review of Buffy The Vampire Slayer Season 12: The Reckoning #1 awaits! Previously in Buffy The Vampire Slayer: It’s one year later, and the lives of Buffy and the Scoobies haven’t been too eventful for a while, at least as far as fighting demons and the forces of darkness are concerned.  But that’s all about to change when Dawn and Xander’s housewarming party is interrupted by some familiar faces bringing news of familiar foes from the future.

This issue opens in the 23rd century, where Harth (the brother of future Slayer Melaka Fray) being tortured by a would-be world-beater who wants to use his knowledge of the past to take over the world retroactively.  With a magical scepter that only he can find and Harth’s blood, his plan can’t fail…  until Harth turns the tables on him.  Back in the 21st century, Xander and Dawn are holding a housewarming for their new home (and their cute new baby, Joyce), which brings Willow, Spike, Giles, and Buffy to visit.  Of course, things never go smoothly for the Slayer, so Angel and Illyria arrive soon after with bad news: There’s a Vamp-ocalypse a’comin’, and only swift action can save the day!  And there’s no possible way that the whole thing is a trap set by someone with intimate knowledge of the events, right?

“NORMAL PERSON STUFF NEVER WORKS OUT FOR ME…”

There’s a likable everything-but-the-kitchen-sink approach to this issue that I sort of enjoy, even if it doesn’t make for the most natural reading experience.  Having not read ‘Fray’ in some years, the sudden resurgence of Harth caused a little bit of “Wha huh?”, and the reassembly of all the cast members (including a returning villain last seen on TV in season 3 whose name I shall not reveal here, Faith herself, and Dawn’s mystical Key power) feels like really loving fan-fiction.  That’s not a bad thing, but the pacing of this issue is pretty breakneck, feeling less like a first issue than like the first three issues of an arc packed into too little space.  George Jeanty’s art is the real MVP in these pages, though, delivering A+ facial expressions, terrifying monstery guys and a quiet house party gone horribly wrong with equal aplomb.  The best part is how he manages to keep everyone’s likenesses accurate (especially since we’re looking at five years after a series that ended fifteen years ago, meaning that Buffy appropriately looks like Sarah Michelle Gellar at 25) without ever getting locked into the “photo-stills from the show” problem that occasionally occurs in licensed comics.

This series has been promised as the culmination of comic book Buffy (but that doesn’t necessarily mean the end), and as such, the creators are pulling out all the stops, bringing out all the beloved characters and setting up a villain to top the previous big bads…  and that’s okay.  Even with the pacing being a little frenetic, Buffy The Vampire Slayer Season 12: The Reckoning #1 gets the job done with excellent art, strong Buffy-speak dialogue, a lot of familiar faces and a plot point that’s been fifteen years in the making, earning

An issue that pulls in a lot of narrative threads and takes off like a shot, perhaps even moving TOO fast, but with seriously pretty art.