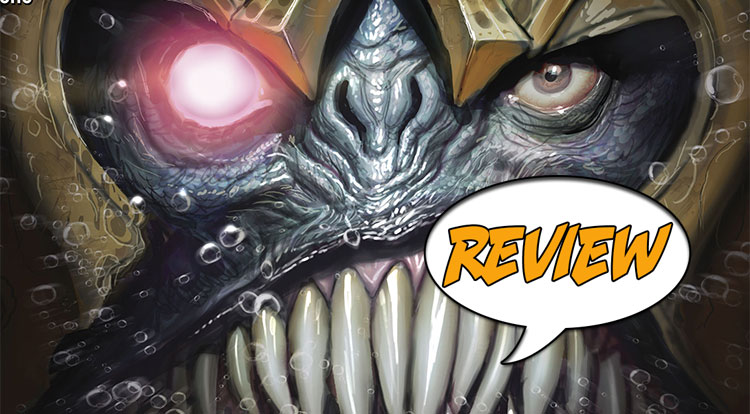 Aquaman has returned and has vowed to overthrow the mad king of Atlantis, Corum Rath. But Rath has allies as old as Atlantis, and a recent upgrade will make it hard for the former ruler of the sea to obtain victory. Can Aquaman defeat a power-mad monster and save Atlantis before Rath destroys it all? You can find out in Aquaman #37, from DC Comics! Writer: Dan Abnett
Artist: Riccardo Federici
Colorist: Sunny Gho
Letterer: Steve Wands
Editor: Alex Atone
Cover Artist: Stepan Sejic
Publisher: DC Comics
Cover Price: $2.99
Previously in Aquaman: For too long the underwater kingdom of Atlantis has suffered under the rule of Corum Rath. Beset on all sides by rebels and usurpers, Rath has made a deal with the Abyssal Dark to retain power. Now, as Aquaman finds himself battling a magically enhanced and deformed mad king, our hero’s survival is not guaranteed.

Corum Rath, once a strong ruler, has become corrupted by the ancient evil known as the Abyssal Dark. Now, infused with corrupt magic, he stands a changed man as he battles Aquaman. Not even a sneak attack from the leader of the Kingsguard can stop him and Rath is merciless as he disarms his former protector. Torn between pressing the fight and saving an ally, Aquaman flees the throne room, a bleeding and broken Murk in tow.

Meanwhile, Vulko, Dolphin and King Shark have sought out the ancient magical guardians who are sworn to protect Atlantis for aid in the fight. The spirits refuse. Rath, as king of Atlantis, is an embodiment of what the spirits are sworn to protect. And the rebels find themselves in danger as a mutated Kadaver, at the lead of a Drift hunting party, find them and quickly attack.

With the rebel forces who would save Atlantis on the ropes, and a king corrupted by the whispers of the Abyssal Dark, Aquaman has to admit to truths he had denied or all of Atlantis may well suffer.

… WHEN MADMEN LEAD THE BLIND.

Aquaman has a history of being an uneven book, where the creative team seems to have trouble establishing a balance between his surface identity as a superhero and his underwater identity as a monarch. Dan Abnett (Legion Lost, Resurrection Man) has found that balance by ignoring it. No substantive mention is made of Aquaman’s connections to the surface world, no thoughts of attempting to contact his friends in the Justice League for assistance. Abnett has thrown Arthur Curry fully into his role as a reluctant warrior and protector. He has grabbed the fantasy elements of Atlantis and the established continuity and turned it up to eleven, re-imagining it as high fantasy. As I read the stories in this issue and the ones leading up to it, I could only feel as if I was reading a sword and sorcery adventure akin to the works of G.R.R. Martin or Weis and Hickman. It feels completely different than it has in the past, and the full-on dive toward the fantasy elements make that difference. I don’t know how Aquaman is portrayed in other books, but here he is a reluctant hero akin to Aragorn, Tanis, and others. As much as I loved his writing, Dan Abnett’s contribution is just one of the elements I found refreshing.

Riccardo Federici (Batman: The Murder Machine, Saria) has an art style so far removed from any house style that you are drawn into his lines and captured by their spell. It is realistic but endowed with an element of fantasy that makes for an amazing viewing experience. Correlations can be made to the great John Bolton and his stunning fantasy works, but it still has a soul of its own. His art enhances Dan Abnett’s writing, selling a feeling of high adventure which is missing from much sequential art today. This collaboration is wonderful.

BOTTOM LINE: IT CASTS A SPELL ON YOU

Aquaman #37 is a tale of adventure, magic, betrayal, and duty that will amaze you. Make sure you hook a copy at your friendly local comic shop.

This is a take on Aquaman we have seen hinted at, but never fully embraced. I hope this tale is setting the path for future stories.