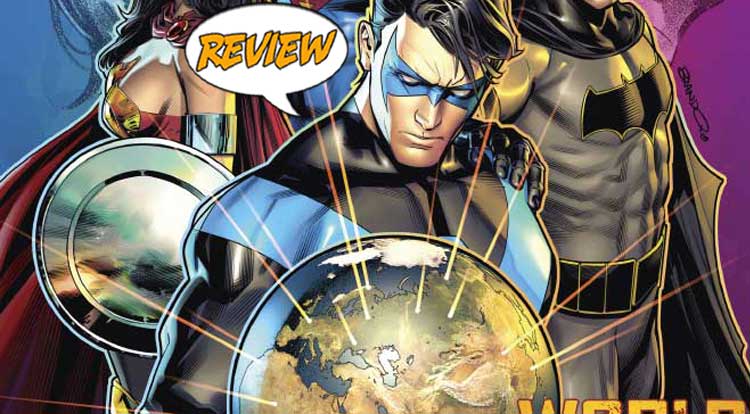 The Source Wall has fallen, sending intergalactic horrors of every stripe out into the DC Universe.  Can Nightwing assemble the team that can save us all?  Your Major Spoilers review of Titans Special #1 awaits! Previously in Titans Special: The Titans are no more, torn apart by internal strife…  again.  But why have the members of the Justice League come to find Nightwing?

AN OFFER HE SHOULDN’T REFUSE

Our story opens with Nightwing, first-person narrating the terrible demise of a young woman whose metahuman powers had suddenly been triggered by the collapse of the Source Wall (during Dark Nights: Metal, which spun into the ‘No Justice’ limited series that recently relaunched the Justice League’s new incarnation.)  She panicked, and his attempts to help made everything worse, leading to the girl’s death.  When we return to the present, we find him explaining to the League what has happened, and his intentions to assemble a team to deal with such Source Wall aberrations.  They are not only on board with this plan but have come to ask him to do that very thing, including some possible membership ideas.  Nightwing, however, has his own team in mind: Raven, still dealing with the fallout of the Teen Titans dissolution; Beast Boy, whose powers are out of control after his close call with the Source Wall; Donna Troy, dealing with the revelation that she is a construct and not an Amazon at all; Natasha Irons (who may or may not be calling herself Steel), the brains of the outfit…  and one member sent by Martian Manhunter to keep an eye on Nightwing, Ms. Martian herself.

REVERBERATIONS OF THE METAL

I really appreciate the fact that this was not a four-issue miniseries or a big long setup to the new Titans status quo, instead compressing the story into one double-sized issue, even setting up the threat of Brother Blood in one complete package.  The varied art teams also works to the story’s advantage here, making each hero’s world seem unique and different and giving us a nice feel for who each of the members is (this time, anyway.)  This comic does have the problem that many DC books have in 2018, though: They’re trading partially on goodwill from stories that “never happened” in the current continuity, which makes for some strange moments of story.  All in all, though, the strength of the dialogue and character work makes for a satisfying read, and one of the art teams includes Nicola Scott, which is itself worth the price of admission.

BOTTOM LINE: A GOOD EXAMPLE OF HOW TO RELAUNCH

I was disappointed to find that Raven and BB weren’t permanently part of the Justice League after ‘No Justice’, but having the Titans relaunching as an official arm of the League is a pretty good compromise position (especially since their headquarters is the classic Hall of Justice.)  Titans Special #1 is double the story pages for less than twice the price, featuring a lot of well-executed moments and storyline heavy lifting, with skilled art in every chapter (especially Beast Boy’s and Donna Troy’s), earning 3.5 out of 5 stars overall.  DC’s new model of storytelling (putting all the setup in a giant-sized special issue before the first issue of the comic comes out) may not be perfect, but I enjoy how well this issue establishes who and what this latest Titans team is going to be about…

A lot of setup for the Titans new status quo, including some lovely character work for the members...