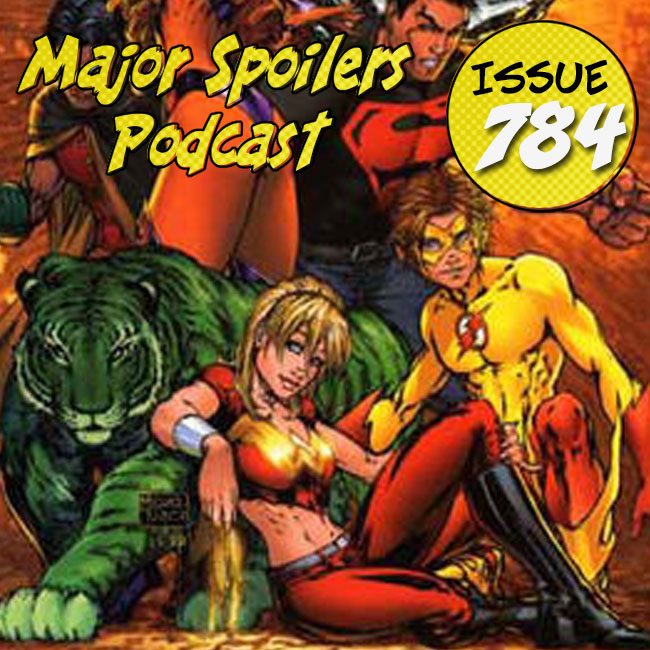 This week, on the Major Spoilers Podcast: Geoff Johns takes on the Teen Titans, Invincible gets and animated series, and is Incredibles 2 worth the wait? Also we review, Black Hammer Age of Doom #3, Fathom #1, and Shanghai Red #1.

Amazon has given a straight to series order to “Invincible,” an animated property from “The Walking Dead” creator Robert Kirkman. Amazon has ordered eight hourlong episodes based on the comic book series of the same name, which revolves around a father and teenage son as the son is taken under his father’s wing for training as a superhero.

STEPHEN
BLACK HAMMER AGE OF DOOM #3
Writer: Jeff Lemire
Artist: Dean Ormston
Publisher: Dark Horse Comics
Release Date: June 20, 2018
Lucy Weber, a.k.a. Black Hammer, continues her journey in Dreamland back to the farm, leading to a confrontation with the mysterious Bereaver. At the same time, both Abe and Barbie give one last shot at salvaging their love lives.

This all-new adventure for Aspen’s preeminent hero sees her attempt to navigate an ever-changing world where The Blue are not only present above the surface-but exploited in new and dangerous ways. When a rival nation to The States decides to take control of the global landscape by tapping into the power of The Blue, Aspen Matthews discovers that a new adversary has risen to challenge the notion that she is the most powerful person on the planet-and humanity may suffer the consequences!

RODRIGO
SHANGHAI RED #1
Writer: Christopher Sebela
Artist: Joshua Hixson
Publisher: Image Comics
Cover Price: $3.99
Release Date: 6/20/2018
Red is one of hundreds shanghaied out of Portland in the late 1800s. Drugged, kidnapped, and sold to a ship’s captain, she wakes up on a boat headed out to sea for years, unable to escape or even reveal who she truly is. Now she’s coming back in a boat covered in blood to find her family and track down the men responsible for stealing her life out from under her. Eisner-nominated writer CHRISTOPHER SEBELA (High Crimes, Heartthrob, We(l)come Back), JOSHUA HIXSON (The Black Woods) and HASSAN OTSMANE-ELHAOU (Felix & Macabber) bring you a tale of revenge, family, and identity that stretches from the deck of a ship outside Shanghai all the way to the bleak streets and secret tunnels of Portland, Oregon.

Teen Titans: A Kid's Game
Writer: Geoff Johns
Publisher: DC Comics
Witness the dawn of a new era in TEEN TITANS: A KID'S GAME, a 192-page trade paperback collecting the best-selling TEEN TITANS #1-7, written by the fan-favorite Geoff Johns with art by Mike McKone and Marlo Alquiza, additional art by Tom Grummett, Nelson DeCastro and Kevin Conrad, and a cover by Michael Turner! Witness the gathering of a new team of Teen Titans and their initial battle against an old, familiar foe: Deathstroke! The reasons behind his actions prove shocking to the team, and before the teen heroes can even get their feet on the ground, they must reencounter the cult of Brother Blood. Plus, an introduction by Johns and Profile Pages from TEEN TITANS/OUTSIDERS SECRET FILES #1!