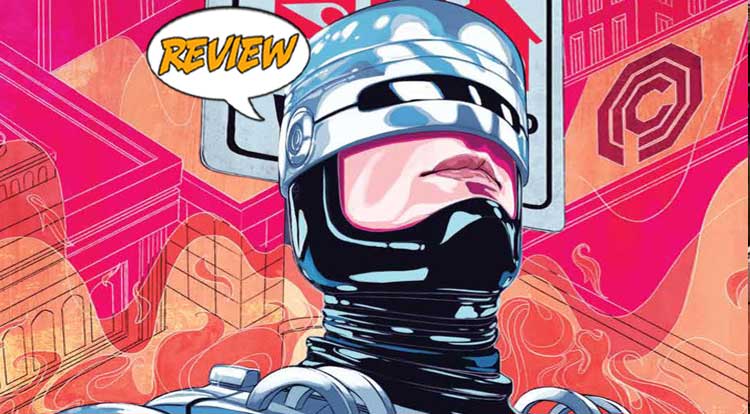 Officer Murphy has once again bucked the programming of OCP.  But this time, there’s even more on the line…  Your Major Spoilers review of Robocop: Citizens Arrest #3 awaits! Previously in Robocop: Citizens Arrest: When Alex Murphy, the original RoboCop, appears to side against OCP, news reports appear that call into question if he’s a risk to the public… or if OCP needs to take drastic measures.

WHAT IS THE FIFTH DIRECTIVE?

In the neighborhood known as The Shore, a group of out-of-work cops meets to discuss the newest OCP indignities: Reductions in their pension, tax penalties and more, all culminating in everyone taking their OCP-designed smartphones and burning them in a dumpster.  We get to see The Mayor announcing additional authoritarian purges, all the while as the neighborhoods rise up and Robocop engages the new A.I. police force in his own…  How shall we say?  His own explosive manner.  There’s also an important conversation about his Prime Directives, including a heretofore unheard-of fifth directive, which Murphy hints is very important.  Even better, his old-school components are protecting his systems against OCP’s new programming directives.

UNUSUAL ART AND COLORING, BUT NOT IN A BAD WAY

The most impressive thing for me about this comic is the art, which is at once weirdly stiff and very expressive.  It reminds me of Dean Motter’s work on Mister X, making the dystopian future of New Detroit feel very alien and off-putting, even as the Fox & Friends-esque news programs and authoritarian pronouncements from above feel very 2018.  I also enjoy the almost watercolor palette of colors in these pages, using blues and pinks and other tones that many comics avoid to create a really engaging visual look for this issue.  I wish that the story were as successful in creating its tone, as this feels very much like it begins and ends in the middle of a thought, without successfully establishing the stakes of our story.  As someone who has seen the original film dozens of times, it’s not a natural leap from there to the events of Robocop: Citizens Arrest #3, and while I really like the characters of Leo and Sara, this issue doesn’t do enough to tell me who they are.

BOTTOM LINE: WHAT A WEIRD BOOK

All in all, this issue makes for an interesting (and occasionally puzzling) reading experience, and there are things in these pages that are really fascinating, such as the corrupt roboticist’s acknowledgment that for true cruelty, his robot charges need a human consciousness.  Robocop: Citizen Arrest #3 combines an almost avant-garde art job with some lovely coloring and a story that hides as much as it reveals, but it does make me want to hunt down the first two issues and get the complete story, earning 3 out of 5 stars overall.  It’s not slavishly devoted to the tone or visual look of the source material, which I respect, but which serves both as an advantage and a slight flaw…

Unique art and vibrant coloring make up for a story that doesn't feel like a complete thought...