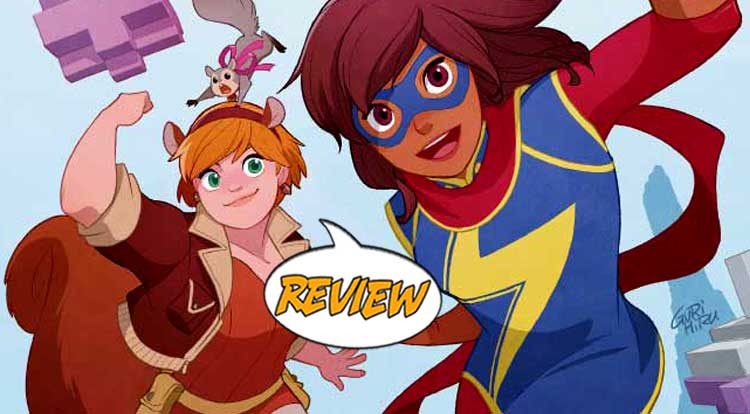 Doreen Green and Kamala Khan are the best thing to happen to Marvel Comics since the original New Warriors.  How is it possible that they’ve never met before?  Your Major Spoilers review of Marvel Rising: Alpha #1 awaits! Previously in Marvel Rising: Alpha: When Doreen Green (also known as the Unbeatable Squirrel Girl) volunteers as head counselor for an extracurricular computer programming class, little does she know that junior counselor Kamala Khan moonlights as crimefighting super hero Ms. Marvel!  But this coding configuration is more than just ones and zeros when a mysterious new super villain shows her face.

Our story opens with the very uncomfortable story of Ember Quade, who considers herself a complete loser, but has serious video game skills.  Sadly, the guys who share the A/V lab with her, think that she can’t be as good at the games as she seems to be, and start to accuse her of running cheat scripts or somehow faking the results.  Before their bullying can really get started, though, they are interrupted by Doreen Green, the class instructor, who redirects everyone back to their work.  Little known to Doreen though, Ember can do more than play the games: She can actually pull items from the game and even bring creatures out of the virtual world, thanks to exposure to Terrigen gas.  Also in their class, though, is high schooler Kamala Khan, taking some advanced placement classes, which leads to a nice team-up moment when VG squirrel Nutsy McSmash comes to life and starts wrecking the joint.

The best part of this issue, hands-down, comes when Doreen realizes that she knows Kamala’s secret identity: “You’re Slothbaby!  The fanfic writer from Freakingawesome!”  That’s funny. Kamala suspects that Squirrel Girl is actually Doreen as well, but throughout the issue, neither hero connects Ember with the video game characters coming to life.  I really enjoy the art in these pages, as Georges Duarte does great backgrounds and establishing shots as well as a really cute Squirrel Girl.  I also like the fact that his Ms. Marvel feels like a gangly teenager, even when she’s in action against a 64-bit gorilla, and the final page of Ember transforming into the villainous Emulator is stunning.  The story here is mostly about Ember and her super-villain origin, and as such, both Doreen and Kamala are reactive, making it really feel like an old-school Marvel Team-Up or Brave and the Bold issue for me, right down to the questions about secret identities.

As a fan of both these characters, I feel like Marvel Rising: Alpha #1 is the perfect balance of fun story, energetic art and characters whom I really want to spend some time with, making for a lovely comic reading experience, all under a beautiful cover, earning 4.5 out of 5 stars overall.  If you don’t already love these two heroes, this book might help you along.  And if you do, it’s a nice team-up treat, combining old-school and modern storytelling elements in one 32-page package.

I'd like to see more of these two together, as well as more from this creative team...