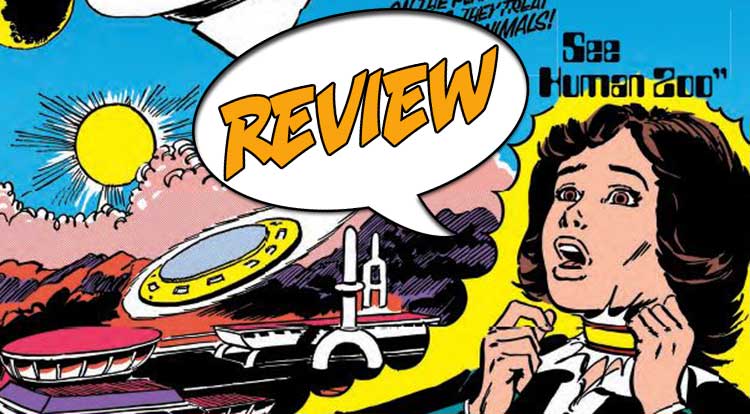 A girl who uses her disability to gain an advantage over those who would help her and twin sisters abducted to be part of an otherworldly society where they are considered animals. These two tales from the legendary girls science fiction magazine Jinty are being reprinted by Rebellion as part of the Treasury of British Comics. Let’s take a closer look. Previously in Jinty: Everything the early 2000AD programs were to young English boys, Jinty was to young English girls. Fondly remembered by its readers for publishing smart, Jinty was aimed at the young female reader providing entertaining science fiction. Now, Rebellion has reprinted two of the most popular stories from the original run as a trade which will be available at the end of the month, and the good people at Rebellion were kind enough to give us an early copy for review, let’s check it out.

The first story reprinted in this edition was originally published from November 5th, 1977 to February 11th, 1978. As “The Land of No Tears” begins, we are introduced to young Cassy Shaw, an English school girl who has a condition in which one of her legs is shorter than the other. Wearing a corrective surgical shoe, we follow her as she goes to school one morning and quickly come to the conclusion that Cassy is not exactly a nice girl. She steps in the street into oncoming traffic, and when she is criticized by a passenger in the car, she decides to take her time crossing, just to teach them a lesson. She plays on the sympathies of a local shop owner to get free candy and pulls a dramatic scene when her teacher threatens to send her to the headmaster for being an hour late for classes. All the while we get Cassy’s internal dialogue which shows how she is deliberately playing on others emotions. But when she finds out that her parents have arranged for her to have a surgery to correct the condition, she seals your opinion of her as the thought balloons declare she likes the way things are now and doesn’t want to be like everyone else. During the surgery, she is pulled mysteriously through time and space, and arrives in a world where her reliance on other people’ sympathies does her no good, because emotion is outlawed.

In the second story, “The Human Zoo”, twin sisters Shona and Jenny Lewis are having a day at your average British zoo when Shona is overwhelmed by sympathy for the animals and the treatment they endure. She even causes a scene in her Biology class the next day as she feels bad for the rat as it is conditioned to run a maze. But it is later, when they board a bus on the way home, that things take a turn. Aliens have stopped the bus, and as the sister try to escape, they are captured and taken to another world, a world where they are considered no more intelligent than animals. As they are separated, Shona must endure the experience of being the pet of an alien girl, imprisoned in a zoo, and part of a pack of human runaways.  and she discovers that she is not alone, and her actions may change a world.

While Jinty seemed to be aimed primarily at young girls, the stories reprinted here could be enjoyed by anyone. In the “Land of No Tears”, Pat Mills (Charley’s War, ABC Warriors) writes a morality tale that anyone can identify with. Carry, while portrayed as a spoiled, manipulative young girl, is still just a young girl, with the maturity that comes along with that age. Mills expertly makes you dislike Carry for taking undue advantage of her disability, and later makes you cheer for her as she overcomes her new circumstances. That dichotomy in writing, the successful transition of a character from unlikeable to sympathetic, is hard for many writers to pull off, but Mills does. It is a glowing example of why he is considered the “Godfather of British Comics.”

In “The Human Zoo” sympathy and empathy are also on display but in a wholly different form.  different way. Malcolm Shaw (Judge Dredd, Return to Armageddon) tells a story exploring how different life experiences can shape your worldview. One sister, Shona, feels total empathy with the animals around her, forced to depend on us and perform for your pleasure and whims, while the other, Jenny, takes it more as a matter of course. Throughout her adventure in the strange alien world, Shona realizes that the empathy is what will save her in the end.

Guy Peeters provides are for both stories, and the artistic continuity gives plenty of opportunities to see how he tackles the different author’s scripts. His work is wonderful, with an old-school attention to detail and design that is a pleasure to see. His panel layout, while sometimes non-traditional, consists of normally no less than 6 panels per page and usually seems to average 9 panels. The panels contain angles to allow them to fit together like a light sequential jigsaw and the placement allows the eye to flow well. In every panel, and you get beautiful detail and ink work, all masterfully planned and distributed. You never feel that the lengthy dialogue and captions ever cover up part of the story, and there seems to be no attempt to sacrifice one for the other. This is the sort of art and attention to design many modern artists should take head of.

I was very young when these stories were originally published, but it is just the sort of thing that would have grabbed me. The science fiction does not seem to be dumbed down at all, and there is palatable effort to gear the stories from a more feminine angle. Few books outside of the teen comedy and funny animal books attempted to cater to younger girls. Even the vintage romance novels of the Silver Age and Bronze age where geared more toward an upper-teen set.

That said, this is not hard sci-fi. You’re not going to have an exploration of scientific how and why the protagonist arrives in their varied situations. This is science fiction by way of Narnia, and like Narnia, no one really needs or wants an explanation of how the wardrobe works, it just does. These tales border on the line of morality plays, but you can see their possible influence on future generations. Pat Mills comments in the introduction that many women have told him their favorite story from Jinty was “The Land with no Tears”, and I can see why. While many teen and pre-teen boy stories would have focused on the violence and action, this story brings the feels which a young girl would have been able to understand at the time. I dare say, that current generations would be just as open to the themes within.

Jinty Vol. 1, The Land of No Tears & The Human Zoo, are classic sci-fi tales in the vein of Twilight Zone. Rediscover them when this new edition hits at the end of the month.

Enjoyable for kids and adults, this should be on your buy list. Rediscover a near-forgotten classic.