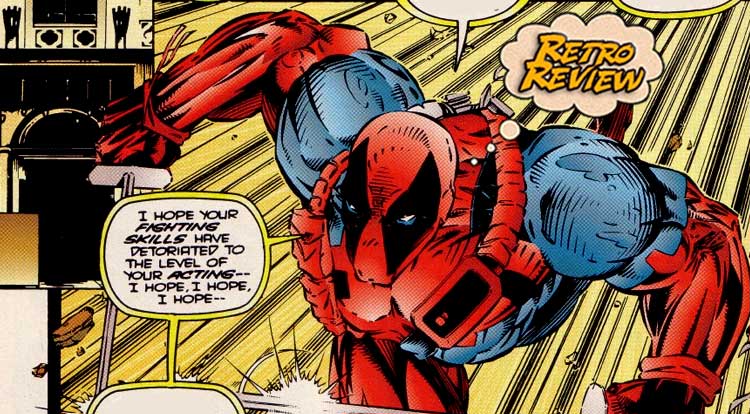 Long before he was a multimedia fourth-wall-breaking-sensation, Deadpool was just an overly pouched X-villain with an attitude.  And this is the story of his first run-in with the man called Logan…  Your Major Spoilers (Retro) Review of Wolverine #88 awaits! Previously in Wolverine: We’ve seen his first appearance.  We’ve seen him time-travel and replace Spider-Man.  We’ve even seen him as a duck, for some reason.  But in early days of the wild and wacky 1990s, Deadpool was still a mostly unknown quantity.  So, when Wolverine went to check in on Kane, the cyborg also known as Weapon X (which I know is confusing, because Wolverine was sometimes called that and indeed originated from the Weapon X Project, but he’s a different dude with stupid rocket fists) at the behest of James “Guardian” Hudson, he did not expect to get ambushed as soon as he entered the door… OH.  MY.  GAWD.  BECKY.  Look at those poses!  I hadn’t realized how much Adam Kubert’s art had evolved over the years, but this double page spread makes it clear that he was once very much Liefeld-influenced, in all the bad ways.  He can draw feet, though, so that’s…  something?  The two healing mutants immediately begin ripping one another to shreds, only for ‘Pool to mock Logan about his own healing factor actually working.

Sharp-eyed readers will notice Wolverine doesn’t have the requisite shiny metal claws, as this issue takes place in the wake of the ‘Fatal Attractions’ crossover of 1993, wherein Magneto forcibly removed the adamantium from his body, leaving the Canucklehead’s system overtaxed by the whole “keeping him alive” part of the program.  Larry Hama’s script is also an early (my brain wants to say the first, but I can’t be certain of that, and my research hasn’t been very fruitful) example of Deadpool speaking with an obvious Bugs Bunny-inspired patter.  As for the reason he’s pursuing Kane, it’s all about a girl… But not just any girl, my friends.  THE girl.  As in, Vanessa Carlyle.  As in, you’ve seen Deadpool in the movies, right?  Vanessa, who in the comics has pale blue skin, white hair and shape-shifting powers, has left the Merc With a Mouth to live with Kane (who by the way, does not have transformation powers that I know of, so I have no idea what is happening in page two above, but his superhero suit is a vest with a turtleneck and a mess of belts so who cares how he puts it on) and Wade is not happy about it.  Of course, if you’ve seen the flick, you don’t expect Vanessa to just roll over at being the center of a dude-fight, and that, at least, hasn’t changed here in Wolverine #88… Once again, we see Kubert’s influences in play, as there’s a ton of Jim Lee in that Vanessa figure and the layouts of the page.  Sadly, Adam isn’t quite as skilled as Jim in putting all the pieces of Wolverine #88 together (and 1994 Jim Lee is still known for taking a lot of shortcuts and over-rendering his crosshatching and impossible female figures.)  Slowly recovering from his Wade Wilson stabbing incident, Wolverine hops a cab across town to the theatre where Kane and Vanessa are working on their new play, while Deadpool beats up not only Kane but Vanessa herself, kicking her hard in the face with a mocking “Vanetha fall down, go boom!”  He then prepares to kill her new boyfriend while she watches, which is one of a myriad of reasons why readers who remember these appearances had some issues with him transitioning fully into a hero role… The arrival of Wolverine unties the Gordian Knot (or maybe the Judgment of Solomon, I’m not always great with metaphor), as he deflects the sword aimed at Vanessa’s heart, while Kane saves himself.  Faced with three angry mutants, two of whom are Canadian cyborgs, Deadpool chooses the better part of valor and retreats.  With a grenade.

With the threat gone and Kane clearly okay, Wolverine takes a moment to remind the couple about the importance of sharing and family (another theme that reminds me of movie ‘Pool, especially in the sequel) and wishing them well in their romance.  Vanessa isn’t so sure it’s still a thing, as Kane nearly let her die… …a moment that lets Wolverine do his Wise Old Man schtick, which frankly I kind of love about him.  And, if you need someone to sound profound while punching through people’s spleens with knuckle-blades, Larry Hama is your man, as he makes all this issue’s dialogue feel vibrant, if not realistic exactly.  Best of all, all of Deadpool’s snappy one-liners are actually kind of funny, while Wolverine gets to channel his Canadian John Wayne shtick.  Sadly, the art isn’t quite up to the task of the script, even if the young artist shows a lot of promise, leaving Wolverine #88 with a right-down-the-middle 2.5 out of 5 stars overall.  It’s really sort of startling to see how brutal and dark Deadpool is in these pages, but he’s still in  his enigmatic plot device phase here, and later stories will chalk it all up to repeated brain trauma, if I recall correctly…

Either way, we can all agree Weapon X/Kane is just terrible.