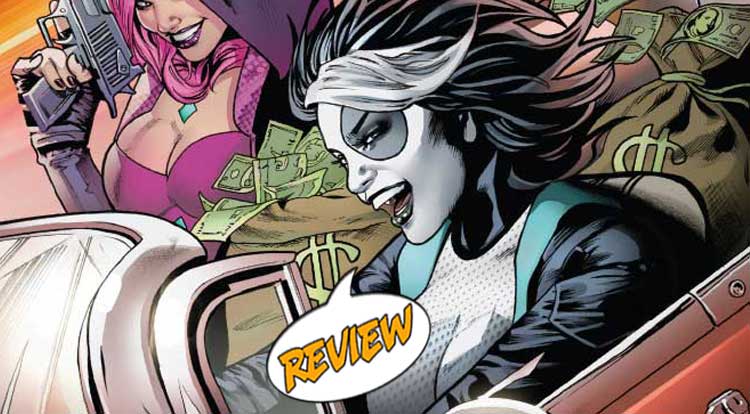 Topaz has targeted Domino for reasons unknown.  And now, she has killed Dom’s best friends with a bomb…  That makes this personal.  Your Major Spoilers review of Domino #3 awaits! Previously in Domino: Domino is being target by a mysterious woman called Topaz and an even more mysterious old man who claims to have a secret connection to Domino’s past.  With inside information from someone Domino trusts, the pair have been tormenting Domino at every turn: First by throwing her out a window on her birthday and now by blowing up a speedboat with Domino’s friends in it…

This issue opens seconds after the explosion from last time, with Domino lying, concussed and bleeding, realizing that Diamondback, Outlaw, The Hulk and Adelbert are gone.  She flashes back to the last time all her friends were gone as a child, being raised in a secret facility that wanted to exploit her powers.  Thing get even more terrible when the scientists give her a kitten, setting up terrible things in the future.  In the present, Topaz gets the better of her again, turning her powers up to the point where they turn against her and making an escape from a grieving Dom.  When the reveal comes that she isn’t alone after all, Dom has to deal with the terrible expectation that somebody might have sold her out.  But Amadeus knows a guy who might be able to help her with her power problems, sending Domino off to Hong Kong for assistance…

…from Shang-Chi, Master of Kung-Fu!

Man, you had me at Shang-Chi…  Simone’s script is, as always, all about character and emotion and family, making for a really cool issue where not a lot happens, but you really don’t mind.  The mystery of Topaz is the driving force for Dom’s recollections of tortures past, for her worries that Diamondback may have betrayed her and for her shameless crush on Shang-Chi, who customarily appears shirtless.  Baldeon’s art is once again really wonderful, especially when Domino has to fight her way through would-be kung-fu acolytes.  Each panel features fluid-but-somehow-explosion movements, and his facial expressions are top-notch in every panel.  (Domino’s reaction to seeing that her friends survived is kind of heart-breaking.)  Best of all, we get to see more of her past filled in, including the origin of her eye-marking (though for some reason, I think this isn’t the FIRST origin thereof?) and a really satisfying moment where one of her tormentors gets his just desserts for threatening her pet kitty…

What I love most about this series is the way that it has forged relationships between unexpected characters, used Amadeus “Hulk” Cho and Shang in new ways that honor their history in the Marvel Universe and also makes them seem very human and relatable.  Domino #3 builds more of Neena Thurman’s history while moving the plot forward and forging new ties throughout the lesser-seen Marvel characters, which I’m always up for, all the while looking pretty great, earning 4 out of 5 stars overall.  Having just seen Deadpool 2, followed by my read of this issue, I am a bit bemused to find myself a hardcore Domino fan…

Giving character to several neglected Marvel types, deepening Neena's back story and giving a lot of respect to a Marvel veteran character, with exuberant art.