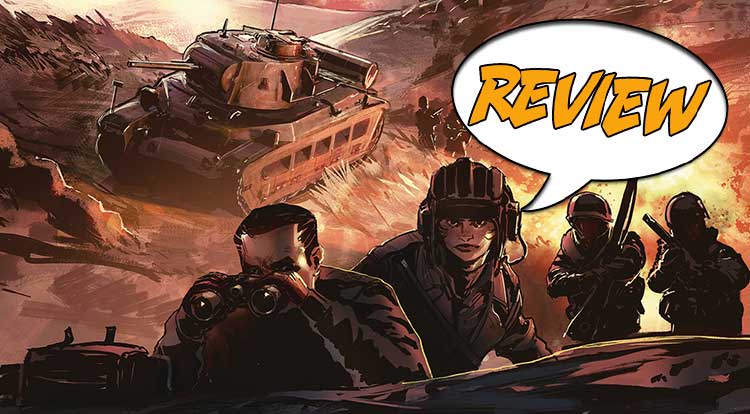 War is Hell and Garth Ennis is the writer to take by the hand in your journey through it as you join the Soviet and Nazi tankers in this searing examination of the opening moves of the Battle of the Kursk. Here is your Major Spoilers review of World of Tanks: Citadel #2 from Dark Horse Comics. Previously in Garth Ennis’s World of Tanks:  Citadel:  The opening skirmishes of the Battle of the Kursk, one the largest tank battles in history, has begun.  Soviet tankers Piotr Piotrovich and Natalya Pulkhova find themselves with Matildas, sub-optimal British made tanks.  On the other side, German tankmen Karl Kraft and Freddie Stadler ready their Panzer for its role in the coming assault.

THE STORY OF A BATTLE

Garth Ennis is a born storyteller.  Whether it’s his uber-cynical take on superheroes in The Boys, his blasphemous examination of religion in Preacher, or the single-minded ferocity of the Punisher, the one thing marking those creative efforts is Ennis’s undoubted storytelling skills.  And so it is with World of Tanks: Citadel #2, which is told through the viewpoints of two opposing tanker crews.  What is remarkable is that there is no mention of ideology, of the crusading heartbeat of Communism, or the racist insanity of the Nazis.  Instead, we see our ‘heroes’ battling for their lives amidst the chaos of war.

By July 1943, the war on the Eastern Front between Nazi Germany and Soviet Russia had entered a critical phase.  The failure of the opening rounds of Operation Barbarossa to knock the Soviets out of the war resulted in the Nazi invasion grinding to a halt amidst the cold and mud of the Russian winter.  Now, with the northern summer, plans were made to launch a simultaneous attack from the north and south of the Kursk salient, and in doing so, isolate and destroy a large Soviet force of men and armored vehicles, and in doing so retake the key cities of Kharkov and Kursk.

Here endeth the history lesson.  None of the larger strategic issues of the battle feature in World of Tanks:  Citadel #2.  Instead, Ennis smartly examines the fighting as it occurred on the ground, from the viewpoint characters of Piotrovich and Pulkhova on the Soviet side and Kraft and Stadler on the German side.  As mentioned before, it isn’t ideology that motivates the characters, though that is the underlying feature of the overall war in the East.  Instead, it is pride, love of nation and the will to survive that pushes the men and women featured in the book.

ALL THAT MATTERS IS CHARACTER

The great strength of World of Tanks:  Citadel #2 is the writing and characterization.  Ennis expertly draws his characters as resolutely human, with their weaknesses and strengths revealed under the stress of battle.  Reinforcements come apart under fire.  Experienced tankers are shown as laconic, as if they are on a Sunday drive, instead of face forward into a hell storm of shellfire and landmines.

Ennis has pushed to one side the abhorrent ideologies of both sides, leaving us with men and women who simply want to live to see the end of the day.  They are shown working competently together, using hard won experience to survive the battle.  They fight amongst each other, as you would expect amidst the high-tension stakes of a growing tank battle that will come to be seen as the largest of the Second World War.

The artwork displayed in World of Tanks:  Citadel #2 is perfectly serviceable, conveying the movement and scale of the tank battles with economical ferocity.  Tanks explode and burn, filling the skies over the Kursk grain fields with pillars of smoke.  The grimness and claustrophobia of the tankers inside their vehicles is visceral, with close up shots of faces bathed in sweat and tight with fear and exhaustion.  The art doesn’t shy away from the bloody slaughter of the infantry, on both sides, hugging the tanks as they maneuver for advantage.

World of Tanks:  Citadel #2 is by no means a dry history.  It is war as it is experienced by the men and women sent off to fight and die for reasons incomprehensible to most.  Ennis pulls off a great feat of writing, making his characters sympathetic to the reader, amidst what will very shortly become one of the largest and most violent battles of the war.  Its kinetic, fast-paced storytelling grabs you by the throat and leaves you on tenterhooks by the last page.  It is storytelling at the highest level by a master comic book writer.

War is Hell and Garth Ennis is the writer to take by the hand in your journey through it as you join the Soviet and Nazi tankers in this searing examination of the opening moves of the Battle of the Kursk.