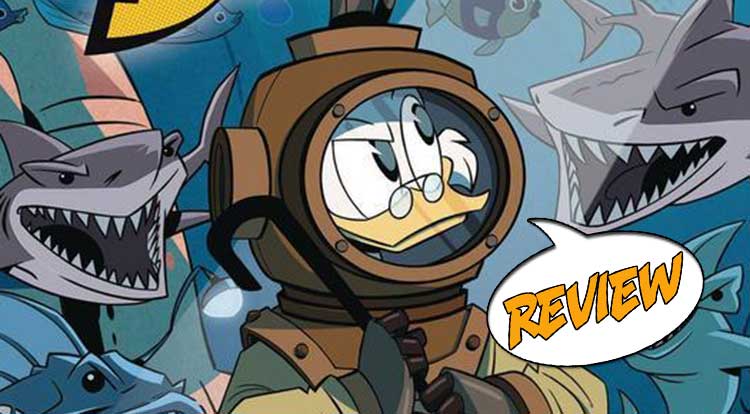 Solving mysteries, rewriting history, that’s just another day in the life of Scrooge McDuck and his nephews. Uncle Scrooge is famous for saying he’s willing to take any risk, but is there a risk even he isn’t willing to take? And what happened when Donald tries to spend quality family time with his Uncle? Find out in Ducktales #9, from IDW Publishing! Previously in Ducktales: After having dealt with the problems caused by his temporary replacement at his business, Manny the Headless Man-Horse, and an incident concerning the Webby and Luna doing some spy work with the British Intelligence, Scrooge and the family decide to have a little normalcy, that is, as normal as it can get for the world’s richest duck and his kin.

This title sticks to its two story format with this new issue. First up, we have a tale of opportunities and chances with “The Risk McDuck Refused!” Written by Joey Cavalieri with art by Gianfranco Florio, this tale has Scrooge going back in time to relive the thrill of starting off with nothing and risking it all, but he quickly learns that there is at least one risk he is not willing to take!

The second story, written by Steve Behling and Alessandra Ferrari, with art duties by Ciro Cangialosi and Cristina Stella, shows a little dissent within the family’s ranks. After Scrooge and his brood return from a dangerous adventure to retrieve a phoenix egg, Donald confronts Scrooge about the danger regularly he put the family in. To stop the in-fighting, Mrs. Beakley declares that he and Donald are to spend time alone on a simple fishing trip. But as Donald and Scrooge soon find out, nothing regarding a McDuck outing ever is simple in “The Frightful Family Fishing Trip!” WARNING: THIS STORY CONTAINS SINGING BEAVERS.

STRAIGHT FROM THE SHOW TO YOUR PULL BOX

Ducktales #9 from IDW Publishing is printed under their licensed Disney Comics banner and is a great example of a licensed comic done right. There are callbacks to previous issues and a slight reference to current episodes, but none of the continuity breaking problems which seem to sprout up when a licensed comic is running concurrent with a regular television show. The stories have the feel of the show, and the art is nearly a dead on version of what currently graces our television screens.

Joey Cavalieri (Captain Carrot, Detective Comics) is a seasoned vet of comic books with many classic superhero stories and multiple licensed tales under his belt. The story here conveys his ability to catch the feel of a license and make it feel worthy of being held up to the animated version. It’s fun, and the outcome is enough to make an adult laugh and a kid to go “Good Choice!”  The art by Gianfranco Florio is excellent and really shows off his adaptability to translate the original animation style to something nearly identical. He has a long history of licensed books, and his own personal style is exciting and vibrant.

The writing team of Steve Behling (Dr. Strange Junior Novelization) and Allesandra Ferrari (Disney Pixar’s Brave) create a fun and exciting adventure in their entry into this issue. It takes a serious issue and deals with it in a fun way. While the problem may not exactly be solved, it shows how the McDuck family and another family deal with their bonding time. It’s a great tale with some wonderful guest stars. The artist team of Ciro Cangialosi (Angry Birds) and Cristina Stella (Disney Star vs the Forces of Evil: Deep Trouble) combine for a visually dynamic style that incorporates original panel design and a path that has you eye flow across the page. As always, they adapt to the requisite licensed style wonderfully.

BOTTOM LINE: A GREAT WAY TO SATISFY YOUR FAN NEEDS

Licensed books are often hit or miss. There are so many masters to be served that often the product suffers in the rush to get something on the shelves, not here. These are little side adventures that take place between larger adventures which are only hinted at, but it fulfills that for which it was created, to get another branch of the story out there. Too often a writer or artist takes licensed work with the intent of changing it to their vision of what it should be, and I’m sure that many people out there have their own head canon about how Ducktales should be handled. Here, we see an example of how it should be done, adherence to the rules set in the parent brand, but vary enough to be unique. That’s what this book does, and it’s why you should check out Ducktales #9 from IDW Publishing today.

Ducktales #9 from IDW Publishing should be fly into your pull box before Scrooge buys up all the copies.

It’s a fun book that gives viewers of the show something to grab on to, and fans of the various characters’ great new stories.