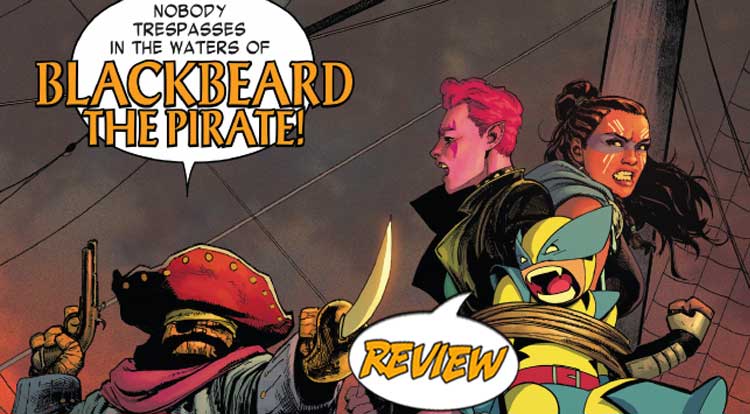 It is canonical fact that, in the Marvel Universe, Blackbeard The Pirate is a time-traveling Benjamin Grimm, as seen in Fantastic Four #5 circa 1962. Your Major Spoilers review of Exiles #4 awaits! Previously in Exiles: An entity called the Time-Eater is destroying the multiverse and the only witness is the Unseen, the being formerly known as Nick Fury who is now cursed to watch all reality pass him by.  Now, a dimension-hopping device called the Tallus has assembled Blink, a post-apocalyptic Ms. Marvel, Iron Lad, Valkyrie and a tiny, adorable Wolvie to save the day.  Now, the Tallus is broken, all hell has broken loose…

…and the entire planet just exploded.

WOTTA REVOLTIN’ DEVELOPMENT THIS IS

We open with The Unseen, watching from his secret moon base, narrating much in the manner of The Watcher, whose place he has taken.  Blink and her team have escaped atomic destruction (though they’re all affected by it emotionally, especially Khan/Ms. Marvel, who comes from a dystopian future world where more such incidents have occurred), but they quickly discover that they’re not on the same Earth anymore.  Nor are they in the 1940s, but instead in the year 1760.  The team quickly encounters trouble in the form of slavers, but are even more shocked to find that the escaping former slave works for Captain Blackbeard…  aka Ben Grimm, The Thing!  And Ben’s not alone, as his fellow pirate captains include 1700s versions of Sam Wilson and Misty Knight, while his “cabin boy” is Becky Barnes, a temporal echo of the girl Valkyrie bonded with on their last planet.  They unite with the three pirate captains to take down an 18th century Henry Peter Gyrich, then track down the missing Tallus, only to find that their enemy has beaten them to the punch.

And he’s actually someone VERY familiar.

Once again, I find myself fascinated by the art of Javier Rodriguez, especially the way he seamlessly incorporates Li’l Wolvie in with the more realistic superhero characters and battle sequences.  Blink’s facial expressions are beautiful throughout the book, as well, and everyone’s character design (especially the pirate Falcon) is wonderfully realized.  (Pirate Misty’s bionic arm is replaced by a hook.  Heh.)  The story being told has a sense of urgency and I love the character moments and dialogue throughout the book.  Khan is slowly defrosting to her new comrades, and Valkyrie agrees to help Iron Lad figure out how to talk to girls, since she’s clearly so good at it.  The Thing/Blackbeard is note-perfect in terms of his dialogue, too, especially his explanation to Blink that she’s not the only funny-lookin’ time traveler stuck in the past dealing with possible paradoxes around.  Also, there’s an appearance by Cain Marko, who in this reality is an ironclad known as ‘Juggernautical.’

BOTTOM LINE: A FUN BOOK WORTHY OF YOUR ATTENTION

I’m a fan of the concept of The Exiles and the way it allows creators to bring all manner of diverse elements from all corners of the Marvel Universe(s) and it all works because that’s the nature of the book.  This new take has a lot of humanity, some important discussion on war, slavery and even matters romantical, leaving Exiles #4 with a well-drawn, well-written 4 out of 5 stars overall.  This group of heroes is unique and fun and the creators’ deliver work that is creative and clever. What’s not to like?

Lovely art, spirited dialogue and a clever use of time-travel elements make for a really nice read...