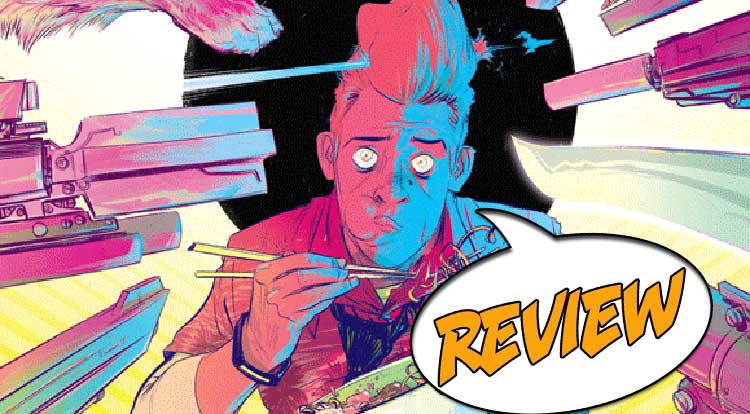 Is Nathan Bright really just the irresponsible, carefree, crazy, TV personality and weatherman who makes people laugh, or is there more to his story? Let’s find out as we review The Weatherman #1 from Image Comics. The year is 2770. The place is Mars, heavily populated and terraformed. The target is Nathan Bright, television personality and weatherman. The tragedy is eighteen billion people. This is the start of The Weatherman #1.

A SCI-FI THRILLER IN OUR SOLAR SYSTEM

Oh, man does The Weatherman #1 pack a gut-punch. This book is rated M, in this issue mainly for violent situations. The story starts out with an old woman, Mrs. Morgan, looking at the hologram of a man. A young woman, Amanda, although we don’t realize this until later, comes to pick her up and drive her to what we gradually find out is a memorial service. They each buy flowers and place them at the memorial, and we pan out to realize that this is huge, the equivalent of an enormous stadium.

It is not until the next scene (which happens the following day), that we learn that this was an annual address, by the President, to commemorate “the attack on Earth.” We find this out in passing as we follow Nathan Bright starting his day. He is a TV weatherman, who is not at the studio when he’s supposed to be the next segment on the morning show. We see him, still in bed, when his boss calls. He takes his time getting ready, hanging with his dog, and sauntering into the studio just in time. These pages are charming. On air, he is outrageous and funny – think morning weather celebrity amped up. How does he get away with this behavior? He makes people laugh…and forget.

Things take a sudden, darker turn as we are next introduced to a trio of bounty hunters. But then we are back to following Nathan, and his dog Sadie, as they leave the studio for the day. It’s looking like a noodle bowl night for the two of them, until Amanda calls Nathan. He and Sadie meet her at the bar where she works, and he asks her out for a second date. When they leave they are being watched by the bounty hunters (a tattooed blonde female who does not speak; a Western-looking fellow who reminded me of a Lee Van Cleef character; and a burly, bald, armored type). They see that Amanda is packing. On their way back to Nathan’s place, he and Amanda visit the memorial and he talks a little about how tries not to think about it.

And then all hell breaks loose. Sadie is shot and killed. (No! Not the dog!) Amanda pulls her gun, radios for her backup, and tries to pull Nathan out. Too late – the Lee Van Cleef bounty hunter shows up on the roof and knocks out her backup team, a half dozen people in full body armor. Then the female bounty hunter drops in to dispatch them – she is apparently quite the killer. The big guy bursts into Nathan’s apartment and says he’s there for “the weatherman.” He and Amanda fight and he almost kills her when Nathan runs him through with a sword he had decorating his wall. We close with Nathan crying and cradling Sadie’s body as Amanda arrests him for the murder of eighteen billion people.

The art in The Weatherman #1 is solid. Settings are familiar feeling but have a lot of futuristic touches. Cars and trucks look like cars and trucks, but there are also small flying vehicles, and you can tell the billboards are electronic. Some communication is done through computers and some through black spheres. We see futuristic buildings, robots, and spaceships. We also see school girls and sports fans. It’s a deft balance, setting a tale like this comfortably in the future but keeping in touch with the humanity of it. There is some humorous exaggeration in the people at times, and Sadie is plainly drawn by someone who knows dogs.

The action scenes are full of tension and really move. You can almost feel the impact of bodies hitting floors or walls. There is a fair amount of blood, and Sadie is killed on panel, which really hit me hard (she looks like a golden retriever, and I’ve had several goldens in my life). There are moments when the art is lighter – such as when we meet Nathan and Sadie – and it reflects just how goofy and carefree the two of them are. This makes the contrast of the fight all that much more raw and ugly.

The Weatherman #1 wastes no time in setting up the story. I was left feeling really torn about Nathan – is he the feckless weatherman whom everyone loves even though he drives them crazy? Can someone who so loved his dog be responsible for the worst terrorist attack ever – an attack on Earth itself, leaving billions dead? If he’s innocent, why is he everyone’s target? If he’s guilty, is he really that much of a sociopath? I honestly don’t know which would be creepier. This looks like a very promising sci-fi thriller.

Is Nathan Bright really responsible for the worst terrorist attack ever?