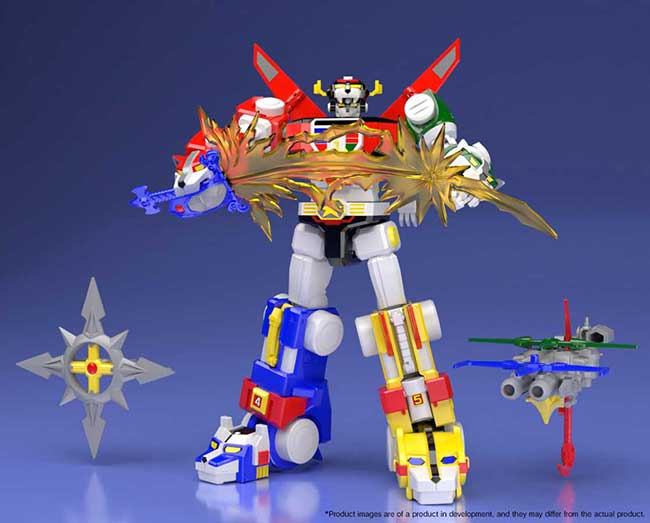 Bluefin has announced a special version of the Super Voltron Super Mini-Pla from Bandai’s Shokugan brand that will be offered as a convention exclusive at the 2018 Comic-Con International.

This Voltron variant includes exclusive box-art and an additional effect part to recreate the “Form Blazing Sword” sequence and is not found in the standard version of the model kit. It will be offered to Comic-Con attendees at the Bluefin Booth (#401) with an MSRP of $70.00.

The Voltron Super Mini-Pla model kit stands more than 7 inches tall when completed. The Black Lion, Red Lion, Green Lion, Blue Lion, and Yellow Lion are each fully articulated and poseable and combine together to form the iconic Voltron robot. Accessories include a Spinning Laser Blade and Blazing Sword. Parts from each of the lions also may be combined to form a Shokugan original mega-blaster weapon.

The Super Mini-Pla compact model kits offer simple pre-colored snap-together assembly. A clipper or sprue cutter is highly recommended for assembly, but the kits do not require glue, which is a great thing for those of us who are a little limited when it comes to painting and assembling model kits.