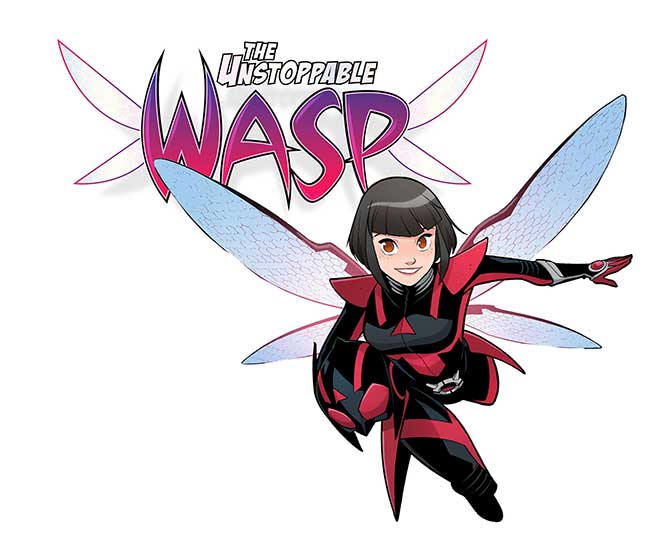 The Unstoppable Wasp returns to Marvel

Here is some news to make you super happy today – Marvel has announced The Unstoppable Wasp is returning in October.

This certainly makes up for the awkward cover from yesterday, and I know the Internet is abuzz (ha!) with this news of Nadia teaming with Agents of G.I.R.L.  Jeremy Whitley is writing the series with Gurihiru providing the art.

Nadia’s new story finds her teaming up with Agents of G.I.R.L. and Janet Van Dyne to uncover mysterious connections between A.I.M. and Nadia’s father, Hank Pym. “I think we’re going to see a lot more of the Nadia we got to know in the last two issues of the first volume, one who doesn’t have all of the answers,” Whitley told Marvel.com. “It wasn’t so long ago that Nadia was a part-time Avenger with very few social obligations. Now she’s a Champion, has responsibilities with G.I.R.L., and has a lot more people in her life than she ever has before. A lot of this first story is going to be about how Nadia reacts to having so many more commitments in her life. We’re also going to deal a lot more with what she’s inherited from Hank, both in her civilian life and as the Wasp. Hank’s had more than his fair share of enemies — and right now, he’s off making more.”

Are you happy with this announcement? With the Ant-Man and The Wasp movie about to drop in theaters, we’re starting to see a whole bunch of Ant-Man and Wasp related titles starting to appear.

We’ll be getting complete solicitations in a few days, and I expect this may just be the tip of the iceberg.