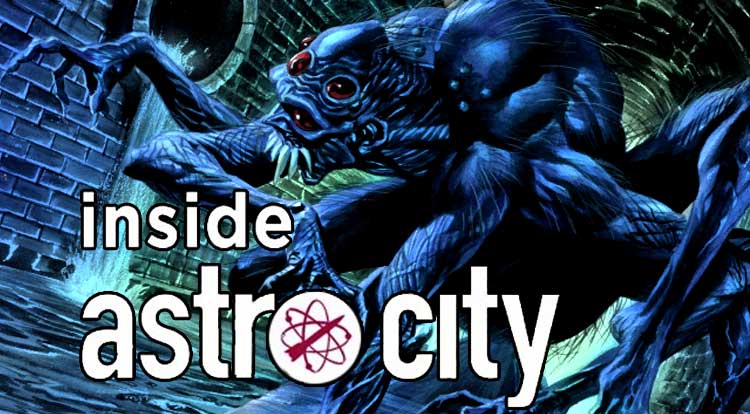 Welcome to Inside Astro City, a column focusing on the Vertigo Comics series Astro City from Kurt Busiek, Brent Anderson, and Alex Ross! Each month, we take a look at the current issue of the series, and ask series writer Kurt Busiek questions about the book. This time out, Michael Tenicek’s life is about to take an unexpected turn… It’s Inside Astro City #51! “Our three-part look into the lives of Astro City “survivors” continues. A woman coping with a devastating loss joins the support group Michael Tenicek has been running for years. But will Michael help her, or will she tear the group apart? For those damaged by life in Astro City, hope and wonder are elusive things. Featuring Honor Guard, the Hanged Man and more.” MAJOR SPOILERS: Rose’s story is one of the most harrowing things I’ve read in some time, and certainly among the darker moments of Astro City history. Did you have any qualms or concerns about Duncan’s fate?

KURT BUSIEK: Heartless monster that I am, I did not.

At least, not until the art came in, and Brent’s visuals really added to the impact. But I had the advantage of knowing his fate from the moment he was created — before that, really — so it wasn’t quite the kick in the guts it was for unsuspecting readers.

If we’d known Duncan for more than a few panels, I might have been more squeamish, but for story reasons, whatever Rose was dealing with had to be something particularly traumatizing, so in story terms, it worked. And I’m glad it had the impact on readers that it did. Sorry, Duncan. MS: This issue is a real gut-punch to read, especially since I did NOT see any of this issue’s story (especially Rose’s sudden, yet completely understandable rage) coming. I’ve seen a couple of comments online to the effect that a person actually living in Astro City wouldn’t have that much skepticism about cosmic nonsense affecting their lives. How would you respond to such a claim?

KB: Most residents of Astro City are aware of the fact that weird superhero fights happen, and they may even see a few from time to time, but they don’t see as much as we the readers do, and they don’t get into the thick of it either, usually. So while they’re used to the idea of battles and destruction, and even to the thought of alien visitations, that doesn’t mean that they’re as blasé about weird cosmic stuff as the audience is.

The idea that time was re-ordered is a weird concept — it doesn’t just mean that Michael’s life was altered, but that all of them had their histories rewritten, maybe with changes, maybe not. It’s not easy to wrap your head around, and it’s not something that your average Astro Citizen is going to think, “Yeah, sure, happens all the time.” After all, even if it does happen, how would they know?

We’ve gotten to see Michael’s memories of Miranda up close and personal. They haven’t. And what they do know, to the extent they believe it, is that it all got erased, that it never happened. That Michael had a completely normal life from birth to the present, without ever meeting Miranda. That, I think, would feel very different to someone than, say, the experience of seeing your roommate shot, or having mystical monsters wipe out your co-workers.

I mean, if someone told you that their children were killed by the CIA but it was all covered up, well, that’s at least conceivable in our real world. But that doesn’t mean people would just believe it because someone says it. MS: This issue, I realized that M.P.H. is still active with the Honor Guard. If my math is right, that means that Michael has been on the team for nearly 30 yearss.  In’t he getting a bit up there in years?

KB: The earliest adventure we’ve seen him in happened in 1991, so he’s been around at least 27 years, yes.

And unlike, say, Quarrel and Crackerjack, he doesn’t seem to have slowed down much, and he doesn’t look like a man in his mid-Fifties. There are reasons for that, and we’ve hinted at them in the past, but hopefully we’ll get to tell a story that explores that, at some point…

MS: Lord Arachnos, Lord Saampa, Aubrey Jason becoming Lord Sovereign. Is there any story or link behind the repeated use of this particular honorific in AC stories?

KB: Star-Lord, Firelord, Lord Chaos, Lord Templar, the Lord of the Living Lightning, Lord Satanis, the Luck Lords…  I could probably go on for a while like that.

It connotes command, a level of aristocracy, and has some majesty to it, so it’s something the crops up when I want to hearken back to a kind of feudal imagery. It works well for characters who rule over others, or feel they should. And in Lord Arachnos’s case, it was a way to imply that he’s more than just some ugly spider-monster, that there’s a culture and a hierarchy to wherever it is he comes from. MS: Once again, I’m wracking my brain and feel stupid for asking: Who is Barry freakin’ Zlott?

KB: I hate to do this, but if you go back two pages from that line, you’ll see Barry’s debut appearance.  (MS: Oops.)

He’s who Michael meets instead of Miranda, in the revamped timeline. MS: Any hints as to what we’ll see in the last regular single issue?

KB: You won’t see poor Barry Zlott, I can tell you that. But you will see more of just about everyone you’ve seen in the past two issues. There’ll be disasters, memories, dreams, insomnia, group discussions, and even an appearance our two by the Hanged Man and the Broken Man. Michael will have decisions to make, and we’ll get to see him make them.

And there’ll even be a little bit of a teaser for our first original graphic novel, ASTRO CITY: N-FORCEMENT.

Plus, there’ll be donuts. Gotta have some donuts.

Hope everyone will enjoy it! Astro City #51: “It’s the final issue of ASTRO CITY…for now. Michael Tenicek lost his world years ago. Now he may lose another, as ordinary life among the extraordinary takes a shattering turn. A character-focused finale to the ongoing Vertigo ASTRO CITY series, and a launch point for its new form. Guest-starring the Hanged Man, Honor Guard and more.”