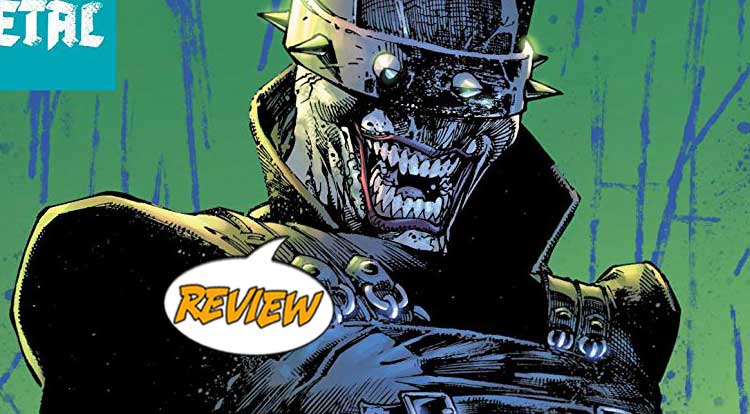 The undying heroes of the DC Universe face down a foe unlike anything they’ve faced before –  The Batman Who Laughs!  Your Major Spoilers review of The Immortal Men #3 awaits! Previously in The Immortal Men: The Immortal Men have risked everything to save the otherwise unremarkable teenager Caden Park.  But neither Caden nor the immortal heroes who saved him know the crucial role he’s predicted to play in the upcoming war between the Immortal Men.  So when the hero Reload falls into the horrifying hands of the Bloodless, Caden Park must learn the Secret History of the DC Universe, and the truth behind his family heritage, and fast…  before the Batman Who Laughs has all his pawns in play!

This issue opens with Roderick, the man who was tasked with protecting Caden Park, awakening to find not only that the boy is gone, but the building that he worked in was gone, replaced by an active construction site.  Roderick wonders where Caden is, and the story shifts to show us: He is in the lair of the Immortal Men, led by the Immortal Man, which is not confusing at all.  Caden’s refusal to accept the truth about his life and these strange people leads to some exposition, both in big ol’ speeches and a telepathic convergence with the I.M. member Ghost Fist.  The Immortal Man explains a little about his soldiers, save for Reload, who is in the clutches of one of his oldest enemies, being tortured for the truth about Caden.  The Bloodless, ancient enemies of the Immortal Man, have allied with the extradimensional Bruce Wayen known as The Batman Who Laughs, in the hopes that he will help them to wipe out their undying enemies once and for all.

I *HATE* THE BATMAN WHO LAUGHS

The biggest problem with Immortal Men #3 comes in the introduction of the big villain on the cover.  Leaving aside whether or not I like the character, his interactions with The Bloodless aren’t really explained, and since the villains have only been in existence for a couple of issues, having a new leader take over feels awkward and unexplained.  I like some of this issue’s revelations (like the fact that Timber is the origin of the Paul Bunyan legend, filtered by historical racism/sexism) and there are some nice bits of character, but much of the issue consists of monologues of one sort or another.  This issue’s art also feels more inconsistent than it did in the first two, as well, with strange proportions and twisted facial expressions all over the pages.  Timber’s entire head changes from page to page, and two consecutive panels of Stray, the feral immortal, look like two separate creatures.  Even Ghost Fist isn’t immune, with his cool hat making for a couple of super-awkward panels that have it hovering oddly or twisting impossibly out of frame.

BOTTOM LINE: NOT THEIR BEST WORK

Once again, the weakness of the New Age of DC Heroes books comes through in this issue, with the plot feeling like it’s already begun to meander before Caden’s situation has even been explained.  Still, even with my complaints, this issue isn’t a total loss, as there are a couple of lovely moments (especially the final splash page) inside, and I still want to know the secrets of these characters.  The Immortal Men #3 is an issue that has its problems, mostly in consistency and executions, but still has a lot going for it, earning a better-than-average 2.5 out of 5 stars overall, even with that parts of it that didn’t work.  I hope that all we’re seeing is a mid-arc slump and not the whole thing flying off the rails.

A little bit fragmented in terms of story and the art is a lot less consistent than the first two issues...