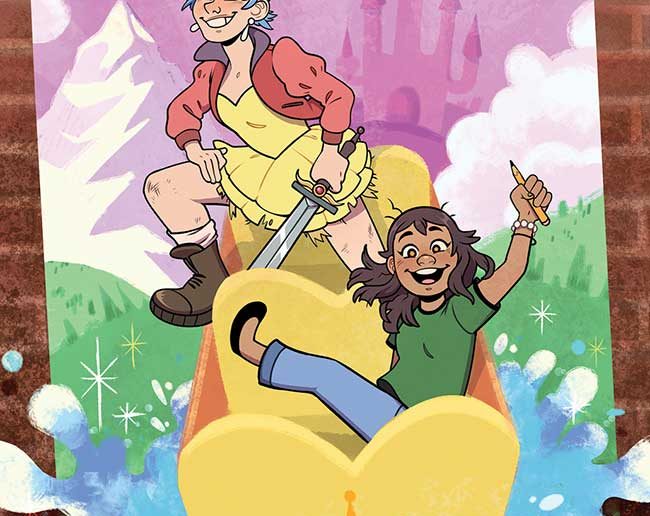 BOOM! Studios is proud to kick off BOOM! Box Jam, a week-long spotlight on the best YA comic books and graphic novels from the award-winning imprint in the coming months, by announcing WELCOME TO WANDERLAND #1, a new four issue limited series from writer Jackie Ball (Goldie Vance) and artist Maddi Gonzalez (Elements) where fairy tales aren’t exactly a dream come true.

“WELCOME TO WANDERLAND is inspired by my career in theme park design, and the wonderful, passionate weirdos who work in that world,” said Jackie Ball. “One of my best friends grew up in Orlando, and he used to go to the parks after school to do his homework. It just painted such a picture of what it was like to grow up so constantly immersed in this rich other world, and so that’s where Bel came from: a kid who spends all her time in a park and is passionate to a fault about a place that’s going to seed a little bit, despite being run by a massive corporation with deep pockets. It was important to me that it didn’t come off as making fun of Bel for caring so much, because being a passionate, detail-oriented nerd can be a wonderful gift as a creative person. But it can be all-consuming, especially when you’re a teenager, and that can blind you to things like other people’s feelings. That’s something Bel’s going to have to wrestle with.”

“I’m super psyched to get to work on WELCOME TO WANDERLAND!,” said Maddi Gonzalez. “It’s such a cool concept, and as someone who adores the wonder of theme parks and magical realism, I’m excited to help bring to life this new world full of fantastical elements and big personalities. Bel and Riot have been some of my favorite characters to design so far!”

“WELCOME TO WANDERLAND is a hilarious, gleeful exploration into creativity and what happens when you let something you love define your identity instead of illuminating and informing it,” said Shannon Watters, Senior Editor, BOOM! Studios. “Jackie and Maddi’s work together is a joy, and a wonderful addition to the BOOM! Box canon.”

Print copies of WELCOME TO WANDERLAND will be available for sale in September 2018 at local comic book shops (use comicshoplocator.com to find the nearest one) or at the BOOM! Studios webstore. Digital copies can be purchased from content providers, including comiXology, iBooks, Google Play, and the BOOM! Studios app.

For continuing news on WELCOME TO WANDERLAND and more from BOOM! Studios, stay tuned to www.boom-studios.com and follow @boomstudios on Twitter.