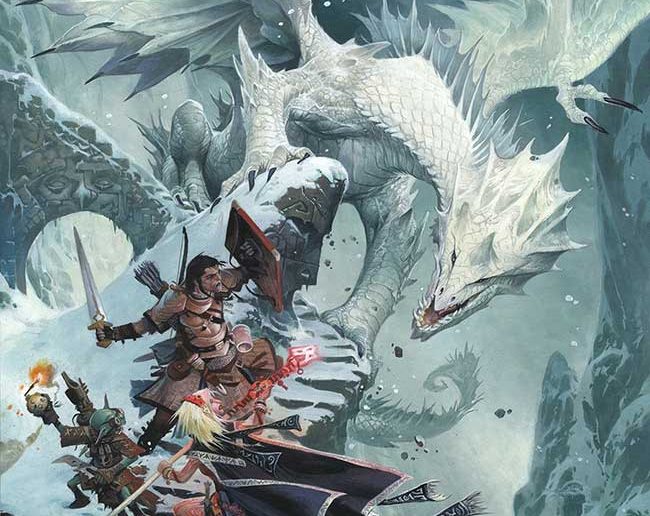 Paizo is launching an open playtest of Pathfinder Second Edition on Aug. 2 at the Gen Con gaming convention in Indianapolis, replicating the model the publisher used in 2008 to create the first edition of Pathfinder. Designer Mark Seifter talked with Major Spoilers about the goals for second edition, making higher level play more accessible and design philosophy. Major Spoilers: Let’s start with the big picture. Why did Paizo feel the need to make a second edition of Pathfinder?

Mark Seifter: Game designers are always coming up with the next new thing. Even with the playtest document we’ve sent to the printers, we’ve already come up with ways to tweak it after the fact. But there’s a certain point that it really starts to reach critical mass. We learned through talking to players and GMs around the world, through our own games, through our own experience with our adventure developers writing adventures and figuring out where the system was getting in the way. We realized we can really make the game better but still keep it Pathfinder.

MS: Why are you doing a playtest?

Seifter: We can go ahead and try to take all the data we’ve obtained from talking to people and surveys and make rules, but the only way we’re going to be able to find everything in such a complicated game with so many interactions is if you crowdsource that. Even if an experienced designer could in an hour of analyzing something find 10 or 20 times as much as just an ordinary player or DM, if you send [the playtest]to a couple thousand ordinary players or GMs that’s worth 50 experienced designers.

MS: Pathfinder became popular due to people being dissatisfied with Dungeons & Dragons moving from 3.5 to 4th Edition. Is Paizo concerned that people will switch to a different game rather than buy a new set of books?

Seifter: You never can keep everyone, and that’s OK. We really love Pathfinder First Edition and will keep publishing the softcover core rulebooks for First Edition as long as people keep buying them. We hope people who stay with First Edition continue to enjoy their games, but we think that Second Edition will offer some exciting evolutions of rules like playing at high levels not being as difficult on the GM and the players as it was before. We’d love to be able to get more people interested and able to play based on certain rules where we were able to keep a lot of the depth people like while simplifying it and making it easier to get into, but fundamentally we want to make a game that the current players of Pathfinder can pick up and say this is Pathfinder. The story is still the same as it was before.

MS: What are some of the ways that Pathfinder Second Edition is trying to make higher level play more accessible?

Seifter: If you try to run a pre-published adventure in Pathfinder, by the time your PCs reach high levels they could either automatically succeed or not be able to succeed at all. Published adventures are a best guess at an average baseline and the people who work those out are amazing in that they can get a good percentage of groups to have fun with those encounters, but I found you have to actually go down PC by PC, audit all your characters and know “Bob’s going to fail his will save” or even run test fights to really figure it out. We’re hoping that’s going to be easier.

MS: So how are you doing that?

Seifter: We’re carefully crafting the way we handle characters and character advancement, making it more likely that you’ll get some cool power that’s not expressed numerically rather than adding a second ability score bonus to this d20 roll. By having more control over the numbers, we also make sure that players who don’t know the game very well aren’t going to fall behind by making a mistake. When we eliminate those and know where the top caps are, we can design challenges at the highest levels that are never going to be too far off from what your party can do.

MS: Is that going to be a design philosophy going forward? In any game system things start balanced and streamlined but the more books that come out the more likely it is that there’s some ability or class or feat that really breaks things.

Seifter: That is definitely true. We’re hoping that with this playtest that the core rulebook will not have any big problems. If we have strong design guides right from the beginning for new content, it’s never going to catch everything but it should be able to catch most things, at least more often than we do now and keep it at a point where an adventure that is appropriate for characters that are core only is appropriate for all characters.

Seifter: A general feat is going to be something that absolutely any character might take. Skill feats are a subset of general feats that will always apply to a skill or possibly more than one skill. Class feats give the core competence of your class for combat or exploration. For rogues, that could be being so unseen that not even True Seeing can see you. For spellcasters, part of the core competency is casting spells, so anything that can help you with spells is going to be a class feat. Having core competency feats living in class feats gives room for other feats. It’s something you would see in Vigilante with the social and combat talents. Your cleric can get Power Attack. Ancestry feats are ones that are based on your upbringing, your heritage, anything that would be an alternate racial trait in Pathfinder. Now you can mix and match anything you want.

MS: Some things that have become class feats, like the fighter’s Power Attack, were once part of many different classes’ builds. Is there a concern about forcing each class into a specific role and eliminating options like a battle cleric?

Seifter: Your cleric can still get Power Attack by multiclass into fighter. We’ve not yet explained how multiclassing works, but I think that clerics will be more willing to do that than they would before. It’s not going to be as punitive to multiclass, where that next higher level class feature is so important whether it’s spell casting or the level of a summoner’s eidolon. What we’re doing is going to help a lot if you feel that multiclassing is making you fall behind where you’d like to be.

MS: What was behind the decision to make alchemist a core class and goblin a core race for Pathfinder Second Edition?

Seifter: For alchemist, we had a lot of survey data on what kind of characters everybody was playing. It was the fan’s number one class and it actually beat out some of the core rulebook classes. Oracle did too, but we knew we had room for one more. Oracle’s definitely something we’re looking at though. In terms of goblins, they’re so iconic to the world of Golarion and to Paizo. In our bestiaries we never say “always chaotic evil.” Pretty much all of the races are commonly evil we’ve shown settlements that aren’t, but we hadn’t done that with goblins yet.