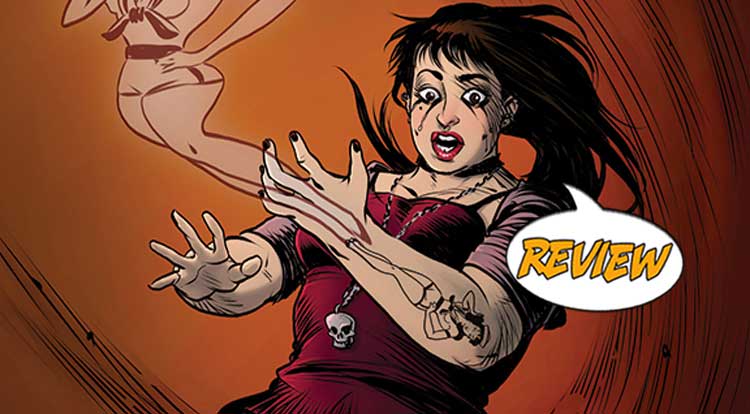 Okay, I’m going to do this once and get is out of my system: BAMALAM!  Now, with that out of the way, let’s find out what made Betty who she is today.  Your Major Spoilers review of Black Betty #4 awaits! Previously in Black Betty: There’s a new monster hunter on the scene.  Got a demon in your closet?  A werewolf in your woods?  A siren at your local beach?

Black Betty can kill anything…  if you’ve got the money!

DOWN MEMORY LANE, AND NOT BY CHOICE

The solicits promise a chance to find out what makes Betty who she is, and from the very first panel that becomes clear.  As a young woman with an overbearing mother, she occasionally wished her mom would just go away, but when she accidentally absorbed her, converting Mom into one of her tattoos, Betty’s world was changed forever.  Having to relive this horror makes Betty promise to kill the psychic who is playing with her memories, and it’s clearly not a threat she makes lightly.  We find out how she became a monster hunter, how she lost her first love even how much she has changed during her career as freelance blower-awayer-of-things-what-go-bumpinnanight, but most of all, we find exactly how tough our hero is, as she quietly relives her worst memories at the hands of a jerk.  When she has finally had enough, Black Betty forcibly breaks the connection, and takes out her Dirty Harry style revolver.

BRUTAL IN THE ‘METALOCALYPSE’ SENSE

There are a lot of things to like in Black Betty #4: Our heroine is a woman of size, but the story makes it clear she’s as much of a badass as any Ash Williams or Van Helsing, and her response to being psychically attacked is an uncompromising bullet in the head.  The art in this sequence is, as we used to say in wrestling fandom, pretty hardcore and I appreciate the story’s flirtation with dark themes but not falling into the cliches of comic violence.  Michela Da Sacco’s art is lively and fun, and even though there seems to be a lack of detailed backgrounds, the fact that much of the comic is spent in splinters of dreamy memory offsets some of that.  There are some issues with the pacing and the delivery of information: As much as I like the mechanism set up to show us Betty’s backstory, the actual revelation is pretty high-velocity.  Having the greatest traumas of her life happen right on top of one another isn’t necessary unlikely (especially in adventure fiction), but it does make the delivery of story feel a little rushed.  There are some moments where the art doesn’t quite work for me, as well, notably in terms of facial expressions.  Both Betty and our psychic seem to have limited range (determined/angry and smug snake, respectively), though the expressions we get are effective in communicating the characters’ mental state.

In short, this is a comic that has a lot going for it, but also has some flaws that affect the overall enjoyment of the story for me.  That can probably be chalked up to young creators getting their feet wet in comics, though, and I can accept most of those issues when balanced against the parts of the story that do work.  (It is troublesome that our antagonist doesn’t get identified or even named in these pages, even if that was set up in issue #3.)  Black Betty #4 has an intriguing protagonist, a killer title, some well-struck use of the tropes of adventure and monster-fighting stories, but most of all, it has heart and enthusiasm, earning a better-than-average 3 out of 5 stars overall.  I want to see more of this character and her world based on this issue, and that makes this one an effective comic in my book…

An examination of our main character that's equal parts touching and horrific, with a dark punchline... It's got potential.