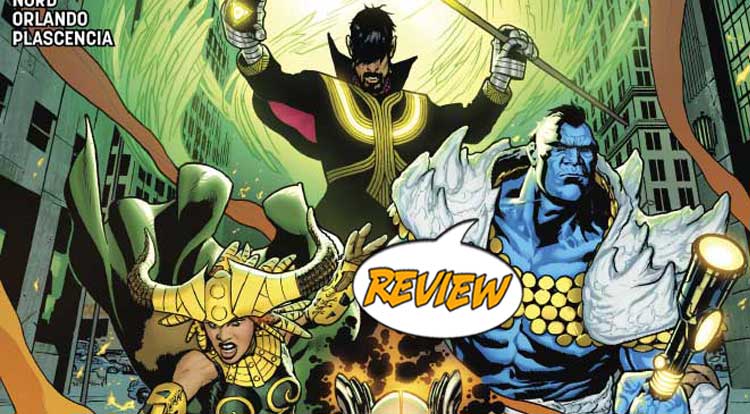 The New Age of  DC Heroes rolls on, and this time, it looks like the inspiration is The Defenders.  But who is the contentious Firebrand?  And what does it all have to do with the mysterious metal from Thanagar?  Your Major Spoilers review of The Unexpected #1 awaits! Previously in The Unexpected:  Janet Fals is Firebrand. Once a paramedic dedicated to saving lives, she must now start a fight once every 24 hours to feed the Conflict Engine that’s replaced her heart.  But Janet’s heart isn’t just a curse: it’s a beacon, drawing out both the mysterious Neon the Unknown and the seductive, malevolent Bad Samaritan.  Do either of them have her best interests in mind or is she doomed either way?

OPENS WITH A BANG

There have been a LOT of Firebrands in the history of the DC (and originally, the Quality Comics) Universe, but this introduction makes for the most interesting one since about 1984 for me.  We see Janet Fals in action, putting a hurting on Killer Croc in order to keep her mysterious heart from erupting.  Janet has been splitting her time between high-caliber bar fighting and volunteering at an understaffed local VA Hospital, which is where she meets the Bad Samaritan.  His fashion sense is Kid Rock dialed up to 1000, and his goal is to rip out her heart, seeking something called The Call of Mandrakk.  (I think Mandrakk was one of the characters from Final Crisis, a strange corrupt Monitor?  Memory is blurry, that story was quite trippy.)  Before Samaritan can tear out her organs, another quadrant is heard from, as Neon The Unknown and his allies Nemesis and the Viking Judge.  Cue the fighty-fighty!  Things get dangerous quickly, and Neon gets ripped to pieces, with his strange glowing blood spattering Firebrand and triggering a strange reaction from her Conflict Engine/heart.

As with most of the New Age of DC books, The Unexpected #1 feels very artist-driven, and the combat sequence is really interesting to look at.  The battle sequence features inventive layouts and some fascinating effects (the coloring/digital effect that makes up Neon’s blood is beautiful, gory and explains his nom de guerre perfectly) and the issue ends with a couple of surprising casualties if you’ve been reading the solicits and promotional material.  The art team (Sook and Nord, I’m presuming) makes each panel stand out, and the character designs are intricate, if somewhat generic-feeling.  I suspect that the intent is to make sure they don’t feel like standard superheroes, another echo of the classic non-team of Defenders, with Doctor Strange, Gargoyle and those fellows.  The script, unfortunately, doesn’t quite keep up with the velocity of the visual storytelling, establishing Janet’s life and status quo quickly before devoting the bulk of the issue to big fighting.  There is a lot of expository dialogue here, and while Bad Samaritan’s dialogue is unique, a lot of the other characters just sort of blur together with one “voice”, making things feel a little one-note.  Some sort of connection to The Metal and Thanagar is introduced, but the cliffhanger ending doesn’t really give a lot of context or setup for what that might mean in the long run.

Still, even with the difficulties of working “Marvel style” (i.e., completed pencils from a plot before dialogue is added, rather than full script), this issue has some interesting concepts to play with.  The Unexpected #1 isn’t just another standard super-book and it doesn’t quite keep all the plates of plot and character spinning effectively, but the art is dynamic and complex, making for a better-than-average 3 out of 5 stars overall.  As a fan of classic Defenders and strange mystical stories in general, I hope this one gets its feet under it quickly, as there is clearly the potential for unique stories with this creative team and these characters.

A lot of unusual and interesting pieces on the board, but the rules of the game aren't yet clear...