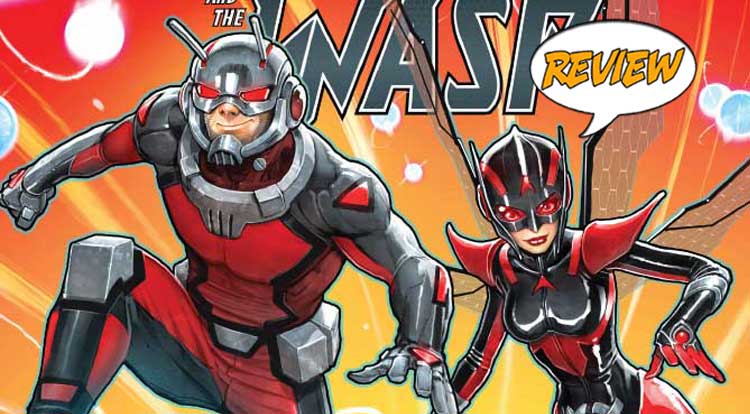 A teen genius and an ex-con walk into the Microverse…  But what’s the punchline?  Your Major Spoilers review of Ant-Man And The Wasp #1 awaits! Previously in Ant-Man And The Wasp: When the original Ant-Man, Hank Pym, retired from the job, electronics technician/burglar Scott Lang stole the costume to save his daughter.  But when true villainy reared its head, Scott rose/shrunk to the occasion, proving himself worthy of the tech and the name.  Teen science prodigy Nadia escaped the Russian assassin-training Red Room to search for her father, Hank Pym, in the United States.  His former wife, Janet Van Dyne, became Nadia’s stepmother and helped her claim her true inheritance: her father’s shrinking technology and heroism.

This issue opens with a lovely moment, explaining the history and partnership of Hank Pym and Janet Van Dyne, from discovering subatomic space to forming the Avengers and how they made the perfect team, ending with “This is not their story.”  Smash cut to Hope declaring that she hates Scott, the man who stole her father’s technology.  Of course, I don’t blame her in this case, as our feckless Ant-Man is in deep space and calling for a ride home, even though they’ve barely met.  Hope sets up an intergalactic transport with the express caveat that Ant-Man must be PRECISELY on time for the teleportation beam or else bad things are going to happen.

So, anyway, bad things happen, leaving Scott stranded in the Microverse and forcing Hope to go on a speedy rescue mission, tracking his beam and finding herself likewise in Subatomica.  Then, they encounter the natives, and Scott can’t help but get involved.

I HEAR THERE’S A FILM COMING UP!

This issue is very interesting, as it sets up a similar dynamic to the Wasp and Ant-Men seen in the trailers for the upcoming movie, with hyper-competent Hope annoyed by Scott’s flippant attitude, but the comics add the additional twist of having him be twice her age.  This issue’s weird aliens are fascinating in concept and the reasoning behind why they dislike our heroic duo is ingenious (plus, we get to see the phrase “alien vampire” thrown around a bit) and it all dovetails into the final-page reveal that will likely make the next few issues of story happen.  I enjoy the loose energy of Garron’s pencils, and the subtle ways that he illustrates The Wasp’s fastidiousness versus Ant-Man’s laissez-faire nature.  The facial expressions between them are lovely (especially his exasperation at being told she calls him ‘Mr. Lang’ because he’s old) and the visuals for this issue’s weird aliens are nice as well, thanks in part to some clever coloring.

The biggest complaint I might have about these pages is the lack of setup for the frenemy-status of our leads, and even that is pretty well handled within the pages of the issue.  Ant-Man And The Wasp #1 may have originated out of corporate synergy with the big sequel debut, but it’s a pretty solid issue with strong and exuberant art throughout, earning 3 out of 5 stars overall.  I actually prefer the “teenage genius” Wasp to the movie Hope, so the complete story with these contrasting heroes has the potential to be something really entertaining.

Fun moments, interesting aliens and a last-page surprise, making for an above-average read...