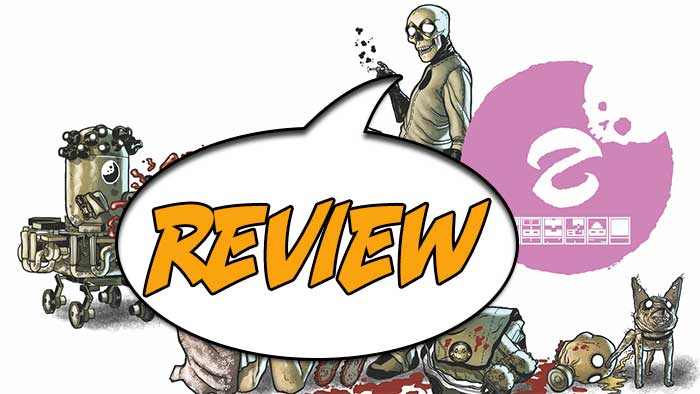 In a dark, dystopian world where zombies and people live side by side in a bizarre symbiotic relationship, the hero known as Z (pronounced Zed) uncovers a horrifying plot to control the world. But will anyone listen to our hero, or will he be silenced by forces he can only begin to comprehend? Let’s find out in Z, by Valentin Ramon and West Wind Comics.

Previously in Z: Valentin Ramon (D4VE, Missing) ran a successful Kickstarter to have his wordless graphic novel, Z, published and printed. Available digitally and in print, this landscape formatted book has been released on an unsuspecting world. Let’s see how it “reads.”

A TALE OF PEOPLE & ZOMBIES & CORPORATIONS

After a successful Kickstarter which ended on May 7th of this year, Valentin Ramon’s Z is now available for purchase. On that Kickstarter, Ramon describes Z as “a wordless book… a funny book… a personal view on the origins of terrorism.” As a wordless piece of sequential art literature, I was concerned how well such a story would be told sans words. I had no reason for concern.

We start with a human in front of a video camera, recording a message. His face is covered with a gas mask, as are all human faces in the book, and he is dressed simply with fabric draped over his body. This world we are introduced to is one that has suffered an environmental disaster that has made the very air poison, and the only way humans seem to live in it is by wearing the gas mask. I say human, because they are not the only inhabitants of this world.

Zombies, yes, the dreaded Z-word. But these are not your mindless, shambling eaters of all things living, these zombies are just trying to go about their own lives with dreams and goals of their own. It is possible that the zombies populating this world are the victims of whatever disaster brought the world to this state, I’m not sure, but that does not matter. The zombies are here, and they are the rulers of this world, and the humans in the gas masks are definably the minority.

But I digress, we were discussing the human who made the video. It seems, as we find out, the video may have been a confession after the fact, because he detonates a bomb, killing himself and others, zombies and humans alike.

Enter our hero, Zed. I call him Zed because Ramon refers to him as such in his Kickstarter video, but it is the only identification made. Zed has no face. Not like in a classic “he is a masked everyman”, but, like, he’s got no face. No flesh covers his skull, and he lives in his heavy defended manor home with a perpetually hungry zombie dog and a virtually ruined “bat-cave” worth of bizarre equipment. A robotic butler, think an astromech on meth, assists him and fights the zombie dog for attention. As Zed goes through his morning routine, he discovers that there has been an explosion, possibly a terrorist attack, and we are on our way for the wildest occurrence of events since Hunter S. Thompson last walked the Earth.

A DARK MIRROR TO THE STATE OF THE WORLD

As I stated before, Z is a wordless graphic novel, but it still speaks a tale of that is well worth experiencing. Life, greed, desire, religion, fanaticism, we see all of this and more as Zed uncovers a plot which, while at first seemingly simple, has tendrils running through every aspect of society. The zombies, with their superior social position and power, treat the humans as second-class citizens. We see examples of police brutality and disregard of worth as the zombies interact with their human counterparts. This even extends to the treatment of Zed; when he first uncovers the method by which the suicide bomber made his explosive, the head of the police laughs at him and then ridicules him in front of others, until he is proven right. What follows is a race to find the source of the bombers and stop more wanton destruction. Ultimately, the plot is more sinister than originally thought and by the end of the ride you are left wondering exactly how deep the rabbit hole runs.

As the sole creator, Valentin Ramon has composed a disturbing masterpiece of horrific and hilarious proportions. As much as it is disturbing, it also has moments which made me laugh out loud. It has a very irreverent humor to it, at times literal potty humor, and it is not hard to laugh at the light-hearted moments despite the surroundings

A common practice with students of films is to watch movie without sound, relying only on the visual images and the camera man to tell the story. If you cannot decipher what is going on, in at least the most general terms, there is a problem. There are no problems of this sort with Z. Valentin Ramon’s art is amazing. For ninety-plus pages, he conducts a class in movement and expression of detail. The characters express ideas or thoughts in illustrated word balloons sans words, and you find yourself seamlessly understanding it. It flows like some demented animator working out a fever dream after a sleepless month. Each panel tells a story with little waste. His use of a monochromatic pallet is as vibrant as anything printed in four color.

I cannot stress enough, this book is not for everyone. There are graphic scenes of gore, sexual situations, zombie dog dismemberment and even violence to robot assistants. If graphically mature work with unsettling themes is not your forte’, you will want to skip this.

However, I highly recommend it for those who love underground comics and the more mature aspects of the medium. This is independent work at its best. Ramon makes clear in his video and website that these are his personal opinions and thoughts, and while some of those opinions may make people uncomfortable, it’s worth it. I was not sure how well he the creator would be able to convey his story with a wordless book, but he did so masterfully. It is a truly excellent story and I believe Z has the potential to be a quiet indie success that will have everyone talking for quite some time. This book is now available in a digital and physical hardcover book through the official website at www.zworldandshop.com.

Go find a copy of Z, then study the art of storytelling without words.

I was impressed with the cinematic quality of the book, the images come disturbingly to life...