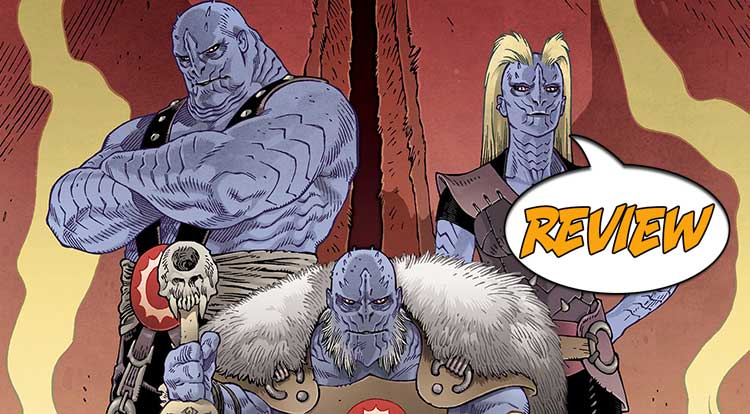 Sword of Ages #4 from writer/artist Gabriel Rodriguez is out now, and Major Spoilers reviews the issue from IDW Publishing. Previously in Gabriel Rodriguez’s Sword of Ages: It’s hitting the fan folks, and in the biggest way possible.  Avalon’s friend, Calen, and his father, Lord Hess, have been killed, leaving the White Monks of the citadel of Caledia to face the combined might of the Black Star Templars and the Red Clan barbarians.  Armed with the Sacred Sword, can Avalon lead the White Monks to victory over the alien invaders and their barbarian brethren?  Maybe, but only if she can deal with those three pesky giants, who inconveniently are immune to attack.

Chilean born artist Gabriel Rodriguez has struck out on his own after his popular and successful work on Locke and Key.  Sword of Ages #4 begins the process of wrapping up the storylines in this 5 issue mini-series, bringing the main character, Avalon, to the citadel of Caledia.  There, she finds her friends under siege from the Black Star Templars and the Red Clan barbarians.  This is a strong issue, full of vigor and fight, with memorable battle scenes and some striking imagery to carry the reader to the final issue.

STRAP IN, YOU’RE IN FOR A RIDE!

If I was to say to you, Dear Reader, that Locke and Key co-creator Gabriel Rodriguez had created a gonzo ’70s inspired fusion of pulp science fiction and Arthurian myth, you’d probably think I had been drinking.  While you may be right, this book is exactly as described.  It reads very much like it has been written by someone who has come across the Arthurian tales for the first time, and has blended them with heavy doses of science fiction, creating something unique and utterly captivating.

While the writing is a little stilted, unsurprising as this is Rodriguez’s first solo writing credit, the true pleasure in reading Sword of Ages #4 comes from the artwork.  Rodriguez’s skill in illustration and composition is on full display here, made even more memorable by colorist Lovern Kindzierski’s splendid work.  Compare the black and white images in the section at the back of the book with their final versions, is like chalk and cheese.  Kindzierski’s skill elevates Rodriguez’s work to true art.

In many ways, this is a beautiful book to look at.  There are scenes of stark savagery, but such is Rodriguez’s talent, they are arresting nonetheless.  The highlight, for me, is a single panel, on page 6 of the digital issue, showing the executed bodies of Calen and Lord Hess.  The composition is simple, but compelling, as the reader’s eye is gradually drawn to the panel at the bottom of the page, lingering for a moment on the devastating image.

But it isn’t all doom and gloom.  There are lashings of action, violence, and derring-do, all in the best traditions of the ’70’s pulps.  Characters you’ve come to like in the earlier books die heroically, and the villains of the piece get their chance to shine.  The action is bold and striking, with figures whirling around a seething battlefield, as the besieging army converges on the citadel, and breaches its walls.  There are views of the action from above, with character reaction shots superimposed over wide action scenes, adding to the immersive sensation that prevails throughout Sword of Ages #4.

Rodriguez rounds out Sword of Ages #4 with an extended look behind the scenes as he explains his world-building techniques in written and visual form.  For those keen to peek behind the curtain, or are looking for guidance about how to compose a comic book, these pages, with some glorious black and white art, aren’t to be missed.

This book feels unlike anything on the market at the moment.  It isn’t straight ahead epic fantasy, nor is it all shiny chrome and steel science fiction.  In blending these together, Rodriguez has made Sword of Ages #4 a compelling, captivating read with imagery that will linger long in your memory.  Buy, borrow or steal, but get this book, and don’t forget to tell all your friends about it.

Gabriel Rodriguez’s first writing foray is a gloriously mad melange of 70s science fiction shackled to an Arthurian aesthetic that will leave you shaking your head at the wondrous audacity of it. A 21st century Moebius!