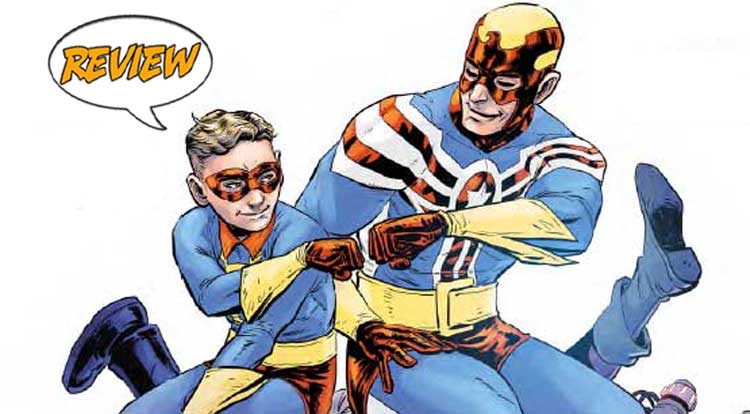 Fighting American: The Ties That Bind #4 (of 4) Review

﻿Marooned in the 21st Century, Fighting American and Speedboy have to face a whole new world…  with some really familiar McCarthy-era problems.  Your Major Spoilers review of Fighting American: The Ties That Bind #4 awaits! Previously in Fighting American: The Ties That Bind: Finding themselves five decades in their future Fighting American and Speedboy have discovered that their old foe Doubleheader is the head of the FBI, and have been manipulated into splitting up their team.  Thanks to the nefarious Poison Penny, a hostess for Faux News, Fighting American has been lured onto national television to reunite with Speedboy, only to get ambushed by the presence of his last living relatives.

Oh, and a squad of armed gunmen in the employ of Doubleheader.

Poison Penny has confronted Nelson Flagg, aka The Fighting American, with his estranged grandson, in the hopes of discrediting and confusing him.  Fortunately, he’s not that easily thrown, and reminds her that it wasn’t him who cavorted with their grandmother, but his brother Johnny, whose body Nelson now inhabits.  (Old-school origins are a little bit complicated.)  Things take a turn when Agent Rutherford of the FBI arrives with evidence of Doubleheaders deeds as well as the complicity of Faux News (not a subtle reference at all) in his crimes.  Commandeering a studio, Rutherford starts revealing the truth, while Fighting American and Speedboy fight off an army of FBI agents and criminals with their fists and some really lovely retro dialogue.  As her phone rings, Rutherford remarks that she’s about to find out if she’s a hero or going to jail for the rest of forever.

There are some fun nods in these pages, such as when Fighting American uses a steel door for a shield and Speedboy reminds him that he said no REAL American would use a shield or when Rutherford remarks that her crazy conspiracy theory may be the most truthful thing ever uttered on Faux News.  That said, the satire here isn’t particularly subtle, even if there is a joyful sense to it all.  Moments like the discovery of Hoover’s hidden FBI tunnel (for sneaking out in drag) and the accidental murder of Poison Penny being played as a joke fall flat to my ear, and it is a little bit bothersome that the criminals that F.A. is more willing to beat down than the FBI agents are mostly African-American.  (For that matter, so is Penny, the villain killed on panel.)  The art is quite lovely throughout, and there’s some truly lustrous coloring that makes the throwback costumes of our heroic duo look amazing.  The big fight sequence is wonderfully illustrated, and the final pages, featuring a clear hook for the next adventures of Fighting American, are really creepy and ominous, showing off Andie Tong’s artistic range.

BOTTOM LINE: NOT A BAD BOOK AT ALL

Though there are more than a few moments that fall flat or ring strangely, the overall tone of the piece works, and while the pointing out of the parallels between McCarthyism and certain current practices are successfully satirical, even if they’re blunt.  Fighting American: The Ties That Bind #4 gives us a nice close to this adventure, lovely art and a clear hook for more adventures for our fifties duo, but best of all it makes you want those adventures, earning 3 out of 5 stars overall.  There’s a lot to like here, and I hope to see more from this creative team.

Satirical and not at all apologetic about it, with well-done art and coloring.