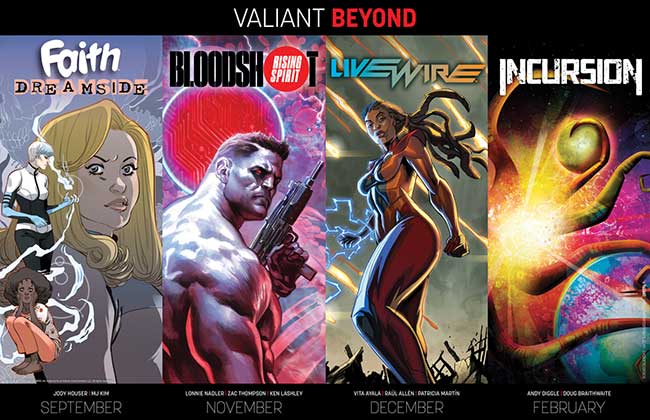 Valiant Entertainment has announced a new wave of comics spinning out of the events of Harbinger Wars 2, that will take the publisher through the rest of 2018 and into the new year.

“I’m excited and thrilled to finally unveil what we have planned for the first wave of the future of Valiant with VALIANT BEYOND,” said Valiant Executive Editor Joe Illidge. “Each of our upcoming series is a shining example of what makes Valiant so unique among comic book publishers – our love for the incredible cast of complex, grounded characters; a pledge to continue creating a cohesive universe that every reader can follow; our passion for inviting and nurturing new voices within the industry; and an unwavering commitment to tell quality stories that will build upon the great Valiant narrative landscape. We’re hard at work driving Valiant forward, and this is just the beginning!”

Here is a breakdown of the various mini-series coming in the months to come: Even before Faith “Zephyr” Herbert gained the power of flight, joined the Harbinger Renegades, and soared through the skies of Los Angeles, deep down she was always a hero at heart. But what’s a hero to do in the face of a foe that exists only in nightmares? Face them head-on, of course! To protect the dreams of her teammate, Animalia, Faith must venture into a fantastical new realm the likes of which the Valiant Universe has never seen… and she’ll need some help from the world’s premiere parapsychologist, Dr. Mirage, to make it back with her subconscious mind still intact! In the early days of the private military contractor Project Rising Spirit, the nanite-infused super-soldier who would one day become their most violent and valuable asset was a resource to be mined – and it was up to one enterprising employee, the “Memory Weaver,” to ensure he did what he was told. But a memory is a tricky thing…and the man Bloodshot used to be won’t let go of his past so easily…

Critically acclaimed writing duo Lonnie Nadler and Zac Thompson (Cable) team up with distinguished artist Ken Lashley (Black Panther) to open a door once closed and reveal answers to questions that Bloodshot himself would never think to ask! Once, Amanda McKee, the technopathic psiot known as Livewire, knew her purpose. She wielded her machine-manipulating powers to benefit the HARBINGER Foundation…until the true depths of her mentor’s cruelty were revealed. She brought UNITY to the world’s most formidable superpowered beings…until a battle between team members dissolved the group for good. She gave hope and guidance to a ragtag band of SECRET WEAPONS…until the U.S. government marked them for death and set her down a path of no return. Now, in the wake of the worst disaster the country’s ever faced – one that was directly caused by her hand – Livewire must decide for herself what kind of hero she will be…if she’ll be one at all. Beyond the margins of human reason, there lies a realm known as the Deadside – where the souls of the dearly departed linger, and where gruesome terrors lie in wait to strike out at us from the dark. But our Deadside isn’t the only deadly dimension of its kind, and another – belonging to an alien world – is about to collide with Earth’s. With the very nature of our reality at stake, who will stand against the tide of unearthly terrors at our doorstep?