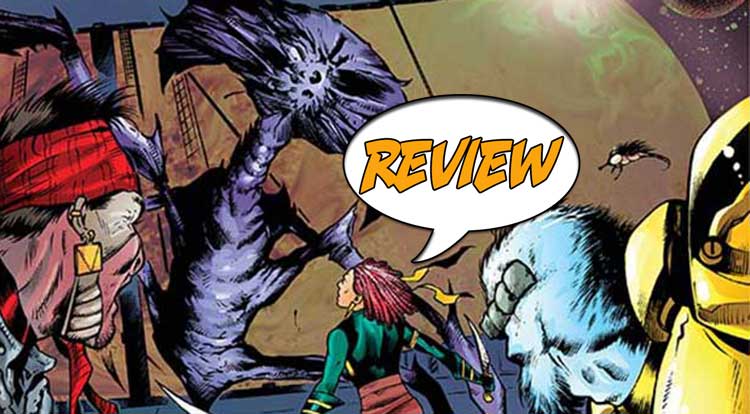 Captain Raader Blackthorne is drawn back into the thick of battle with the offer of a ship, but what is this new enemy she faces? Let’s find out in this review of Swashbucklers: The Saga Continues #3 from Dynamite Entertainment. Previously in Swashbucklers: The Saga Continues:  Captain Raader Blackthorne and a few members of her crew have survived the events of the original Swords of the Swashbucklers, only to find that they are now heroes, and the Colonizers have been overthrown by Revolutionaries. Owen Thrash, leader of the Revolutionaries, proposes that Raader become their leader. She turns this down flat and walks out, to drown her sorrows in the nearest tavern.

IT’S THE MORNING AFTER, AND THINGS STILL LOOK BLEAK

I have not read the original series, although it is on my list. I just jumped into Swashbucklers: The Saga Continues #3. Despite that, it was pretty easy to figure out what was going on. At its heart, this is a pirate story, just one that is set in outer space, which makes it even cooler. Have I mentioned I love pirates?

Captain Raader Blackthorne wakes up in an alley on Hyve, the Colonizer homeworld. Her few surviving crew members find her and bring word that Owen Thrash wants to see her again. She is reluctant to take Colonizer money but, as her crewmate Collos points out, it would at least pay for more drink. Today what the Revolutionaries want from her is her skill. They offer her a ship, Admiral Al’Zan’s ship of the line, no less. The catch? They want her to go up against the Sidari – the alien race that initially sparked the growth of the Colonizer Empire. It appears they are back, and they’ve already destroyed one of the Revolutionaries’ last remaining ships. Raader gives this some thought, but does accept. We jump right into the battle, and Raader does not disappoint. She is a strong and focused leader who is willing to take chances, such as ramming the enemy fleet. After a hull breach, she leaves the helm to repel boarders. The hand to hand combat with the Sidari costs Raader one of her crew, Servitor. But the Captain has some sort of power that she calls upon, and drains completely, in an effort to bring Servitor back. And she does. As the reader, I almost felt her exhaustion at all of this. And then the other shoe drops – the Sidari are bypassing them, and are headed for Earth.

A JOURNEY THROUGH LIGHT AND SHADOW

The art is very expressive in Swashbucklers: The Saga Continues #3. Characters are distinct, and you can almost see what they’re thinking. I especially like the use of deep shadow across the faces. Raader is going through dark times here, full of grief and anger, and it comes through loud and clear. When Servitor dies, we see Raader cradling him, silhouetted against the fiery colors of the battle. I found it breathtaking and deeply moving. There is an interesting take on outer space as well. We are used to the sky being dark, almost black, and full of stars. Here, space is brighter, rich with rose and purple tones, and still full of stars.  It somehow makes outer space feel like a hopeful place, which is such a contrast with the meat of the story. There are aliens in the crew – Servitor, Spyeye, and certainly the Sidari. They are varied and are not all simple variants on humanoid, which makes the universe of this story feel that much more broad and rich.

BOTTOM LINE: NOT YOUR TYPICAL SPACE STORY, BUT THOROUGHLY ENGAGING

Raader and her crew have been through a lot, and it appears they aren’t done yet. If you like an adventure saga with a distinct flavor of swashbuckling, as the title says, this is looking to be a great story. I’ve already connected with the characters and am wondering what is in store for them next. I also really appreciate that there are a couple very strong female characters who are written as strong and complicated characters.