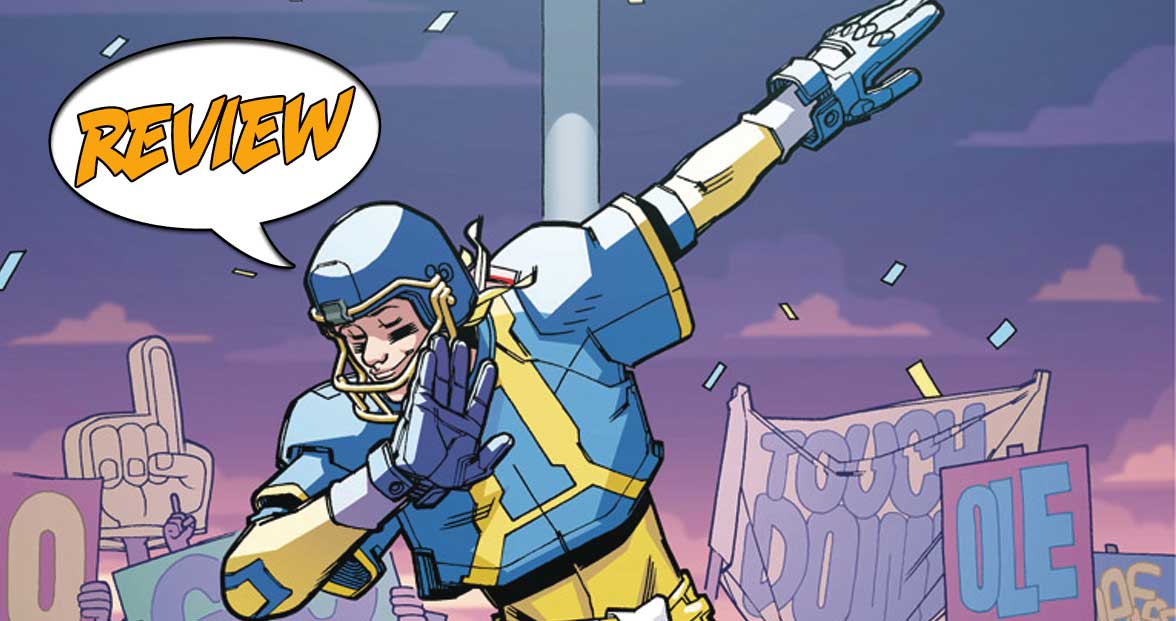 So, you’re in high school and you think you got it tough? Well, do you have to worry about getting expelled for using your powers? Or having your friend fly away, literally, and ignore you? How about a psycho coach with a tendency to scream at the top of his lungs? Okay, I’ll give you the last one, but the rest? No? Then I guess you don’t go to Valiant High! Amanda “Livewire” McKee’s journey as a sophomore continues in Valiant High #2, from Valiant Entertainment! Previously in Valiant High: While the new kid, Colin King, continues his quest to turn Omega Nerd Peter Stanchek into an Alpha, Amanda McKee has to deal with the repercussions of the confrontation between her and ex-friend Charlene “Flamingo” Dupre. Oh, and Coach Bloodshot organizes a little game of BLOODBALL!

FREAKS AND GEEKS AND MYSTERY JANITORS …

After the events of last issue, we begin this one the next day as the students of Valiant High prepare to participate in a game of Bloodball overseen by Coach Bloodshot. Badges are off, powers are legal, and the only rule is there are no rules. Its everyman for themselves, or at least it should be. That’s what Livewire thought before she was saved from a flaming ball of fire by a most unlikely source. Speaking of fire, at the end of our last issue, Amanda was ambushed by her ex-friend Charlene in the school sports equipment room. It looks as if Livewire was in for a hot time until everyone’s favorite flyer swooped in and saved the day, but what transpired between Faith and Charlene while they were up in the air that now has Faith avoiding Amanda?

In other teenage hi-jinx, Colin King continues his mission to turn school loser Peter into the school’s Alpha male. He’s determined to give the Peter a My Fair Lady style makeover, but what are his real intentions? And how could the secrets of the school’s Eternal Sophomore Gilad figure into the equation?

And is Woody EVER going to come to class?

STICKS AND STONE AND FLAMING BALLS…

As we enter into the second issue, Daniel Kibblesmith (Quantum and Woody, Santa’s Husband) looks like he is accelerating his story along at a solid pace while opening up new subplots and mysteries. He has the plotlines moving along at a good clip, we are thrown for some loops, and we get just enough new information to keep us on our toes. What is Harada’s plan for his students? Why is he more lenient on Gilad than others? Who thought it was a good idea to put Coach Bloodshot in charge of kids? The book is fun, and as I said in my previous review, it mirrors just enough of the monthly Valiant plots to make everything familiar, but fresh at the same time.

Derek Charm (Jughead, Star Wars Adventures) brings the heat to this issue again. This time I’m feeling more of his possible manga influence as we get great speed lines and wide eyes. It’s almost manga via Dan Parent and Bob Montana. I like it, as its very simplicity feeds the youthfulness of the story. To have gotten a darker artist or a more realistic one would have had this feeling like a bad CW show. Charm’s art is… charming. (Come on, you knew I had to do it eventually). There are visual treats abound and my favorite is early in with the full-page splash of the Bloodball contest.

I also have to mention Daniel LaFuente’s excellent cover. Not only is it a great design, it is eye-catching and sets the scene. Great work! Looking forward to more of his contributions.

With issue 2, Valiant High officially dodged the sophomore slump. As we are getting further into the story, we are getting deeper into the mystery. Will Amanda realize that other people have problems also? What has happened to Faith? Was Charlene playing them? What is Colin’s plan for Peter? What secret does the mysterious Shadowman of a janitor hide? And really, who thought giving Coach Bloodsport children to watch over was going to be a good thing?

Valiant High #2 manages to stay to cool for school. Make sure you are enrolled for the fun!

Pick this book up, there may be a quiz later.