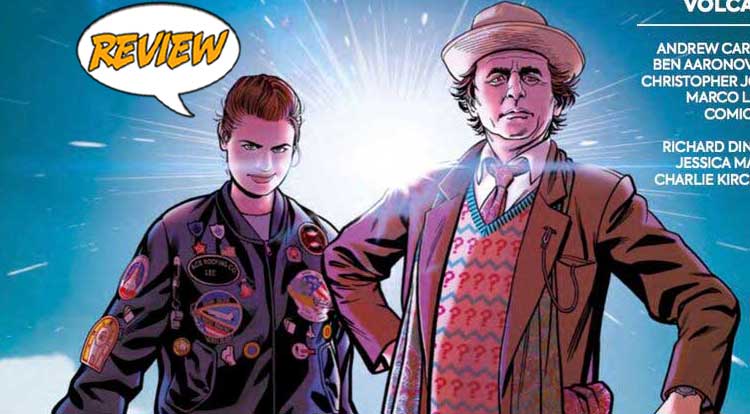 Doctor Who: The Seventh Doctor #1 Review

In his Seventh incarnation, the Doctor wasn’t physically imposing, but his calculating mind made up for it.  Plus, his partner carried explosives.  But will cleverness in concert with explosions be enough to handle… Operation Volcano?  Your Major Spoilers review of Doctor Who: The Seventh Doctor #1 awaits! Previously in Doctor Who: The Seventh Doctor: The Seventh Doctor and Ace have long traveled through space and time in the Doctor’s TARDIS, facing all manner of deadly alien intelligences and witnessing countless unique wonders.  Most recently, the defeated the war-like Kla-Shi-Kel without firing a shot.  Afterward, while witnessing the Kepler Alignment (in the company of some marshmallows and a roaring fire) the TARDIS alerted the pair to an urgent request for assistance from an old friend: Group Captain Gilmore.

A LOT OF DIFFERENT PLOT THREADS

My first response to this comic was to marvel at its complexity and the sheer number of characters and threads that it brings into play, setting up multiple times and places as we go.  In 1967, the Australian government is dealing with the fallout (literally) of an atomic bomb test in the desert, one that has revealed something that seems to be a spacecraft.  Meanwhile, in the year 2029, a space expedition encounters a similar ship in orbit, in which they find Group Captain Gilmore, now seemingly held in suspended animation for decades.  The summoning of the Doctor is incredibly clever, as a newspaper with today’s date is stashed behind a particular book in the Bodleian library, only to find the Doctor already on site…  with the same newspaper, now crumbling to bits due to age.  I love time-travel bits and pieces like that.  The Doctor and a crew of British and Australians make their way to the site, only to discover TWO different spies in their ranks, and a number of complications, including a particular odd parasitic serpent on the back of one of the high-ranking administration officials.

A serpent identical to the one that Gilmore has on his back some 70 years later.

Kudos to Titan for making this a double-sized issue, giving the plots plenty of time and space to unravel, making it feel like an authentic Doctor Who episode.  Moreover, the use of The Doctor and Ace is perfectly in character with their 80s heyday (though the fact that this is written by Seven’s showrunner,  Andrew Cartmel, is a probable reason for that.)  There’s a lot of development for the characters, but also a nice action sequence for Ace, battling what seems to be a possessed pencil-pusher.  There’s a lot of careful detail in facial expressions in Doctor Who: The Seventh Doctor #1, and the likenesses are solid for Sylvester McCoy and Sophie Aldred, but even better, the figures don’t have the stiffness that you sometimes see in books with such a focus on the representation of real actors.  The space sequences are suitably “wide-screen” and epic, and the first shot of the crashed ship gives a really nice sense of scale to things, a very hard proposition. There’s even a second feature that follows up on a supporting character from ‘The Greatest Show In The Galaxy’, one of the better serials of Season 25 back in 1988.

With the four modern Doctors in their monthly ongoing books, I’ve hoped for a while that Titan would explore more of the other incarnations, and it’s good to see Seven getting some representation.  (Now if they’d only hear my cries for more of the Second, Fifth and Sixth Doctors…  You guys!  They’re great!  Even that coat is great!)  Doctor Who: The Seventh Doctor #1 is visually impressive, complex in story and feels like a quintessential Seventh Doctor tale, full of portents and drinking tea and Ace doing the fighting, earning 4 out of 5 stars overall.  I’m sort of hoping that Cartmel actually uses some of his ‘Cartmel Master Plan’, which reputedly was designed to make the Doctor strange, alien and mysterious again, even if it’s not going to be part of TV Who canon.

One of the under-served Doctors gets his day in the sun in an issue that feels like a good first episode...