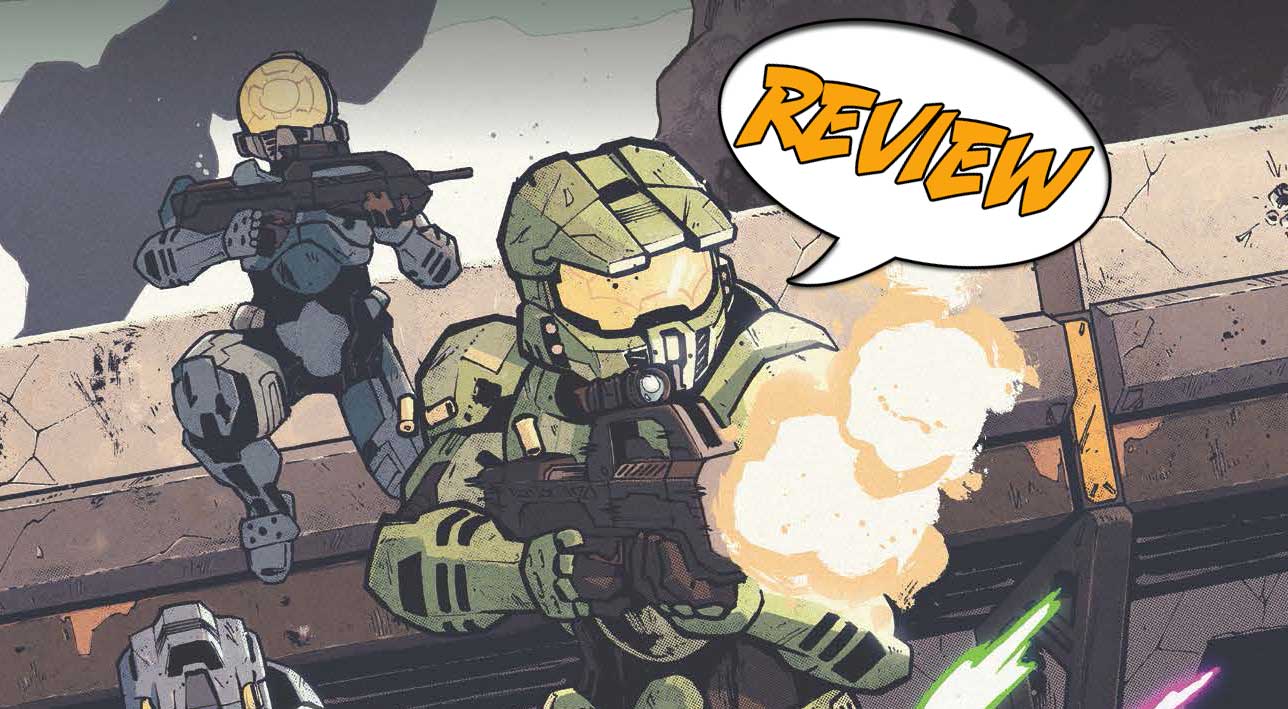 In the year 2525, the expansion of the Earth colonies throughout known space meets with a dangerous threat. The Covenant, a deadly alien alliance which is bent on conquering and killing anything not of them. In response, the United Nations Space Command takes steps to form a deadly new breed of soldier, the Spartan. The most famous of those Spartans is John-117 aka Master Chief. Halo: Collateral Damage #1 from Dark Horse Comics, is one of his stories. Previously in Halo: The SPARTAN-II soldiers were given their now legendary Mjolnir Armor at the Battle of Chi Ceti. During an excursion into an enemy Covenant ship, which the SPARTAN’s succeeded in destroying, they lost their brother-in-arms Samuel-034, the first SPARTAN to have been listed as K.I.A. Now on board the UNSC Persian Gate, the SPARTANS and their support team have gathered to have a remembrance service and funeral for their fallen comrade.

NO REST FOR THE WICKED

Just days after the ceremony for Samuel-034, Dr. Halsey and Commander Yao gather the Blue Team together to give them their next assignment. Covenant ships have appeared near the Alpha Corvi system. Despite the efforts of the UNSC ships stationed there, Covenant dropships broke through to the surface. As the Covenant fleet begins to attack the city of Jamshi, Blue Team is expected to engage the Covenant forces outside the city and try to lessen their attack on the Marine garrison stationed there. No contact is to be made with the Marines, due to a concern for a negative effect they could have on their fellow soldiers

Prior to their deployment, Dr. Halsey questions John-117 in regards to the status of his injuries from the Chi Ceti conflict. In what we as readers know as classic Master Chief style, he dismisses her concerns. The ships A.I., Nora, then briefs the team on their available kit for the mission, as well as giving them a warning about the possibility of encountering the local insurrectionist. Even in the face of total destruction, it seems that political maneuvering must be played. Once they arrive on planet, Blue Team must decide on their plan of attack, and how to handle the potential of conflict from the rebel group. How they handle it determines exactly how their mission may end.

ANOTHER LAYER TO THE HALO UNIVERSE

Ever since Halo: Combat Evolved changed the world when it was introduced as a launch title for the original Xbox video game console in 2001, players and fans have clamored for more on the enigmatic Master Chief and the world he inhabited. More video games followed, with novels, toys, and comics filling in details from all sides of the Covenant War and beyond.  Halo: Collateral Damage, is a solid continuation of that tradition.

Accomplished novelist and comic book author Alex Irvine (Batman: Inferno, One King, One Solider) has a history with the Halo franchise that reaches all the way back to the Halo 2 promotional game/audio drama I LOVE BEES. Now he returns to the Halo Universe with an early tale of John-117 and the Blue Team in the early days of the fight against the Covenant. This is a less experienced Master Chief, sans Cortana, at a time when even his own side did not fully trust him. This is far from the vision we are given in the video games of the loan Master Chief being cheered on by his fellow soldiers. On the contrary, everyone seems wary of their capabilities and intent, including the very citizens they are trying to defend. Irvine works this into the story well, and gives you the notion that the SPARTANS would do their duty even if they were being actively shunned. It is a notion that I hope he explores further in the next two issues.

Artist David Crosland (Scarface: Scared for Life, Yo Gabba Gabb!) has a loose style which harkens me back to many of the great British artists who grace the pages of so many American and British publications. Bold lines and dynamic panel structure make for a book that reads a little differently than we may have seen before from the Halo world. It’s a nice, and with colorist Len O’Grady he makes a solid entry into this universe of war of attrition in the far-flung future.

This first issue does exactly what the first issue of a comic should do, it sets up the protagonist, the antagonist, the conflict, and gives you just enough of a hint at possible swerves that you want to keep reading to find out how it all turns out. From Dr. Halsey’s treatment of John-117 to their dismissal as weapons by Commander Yao, this is a part of the Halo Universe that had been hinted at and covered in other tales, but here we see it playing out very early in the long fight.

Are there problems? Sure, no story is perfect. Myself, having not followed the Halo story for quite some years, was a little surprised by the fact they showed the Master Chief sans his helmet. But the overall look of the tech and the action on the page softened the effect for me. Overall, it is the beginning of a good story and I’m curious how it will play out.

HALO: Collateral Damage #1 from Dark Horse Comics should be recruited into your monthly read pile.

The beginning of a solid sci-fi war story set in the Halo Universe, I want to see how it turns out.