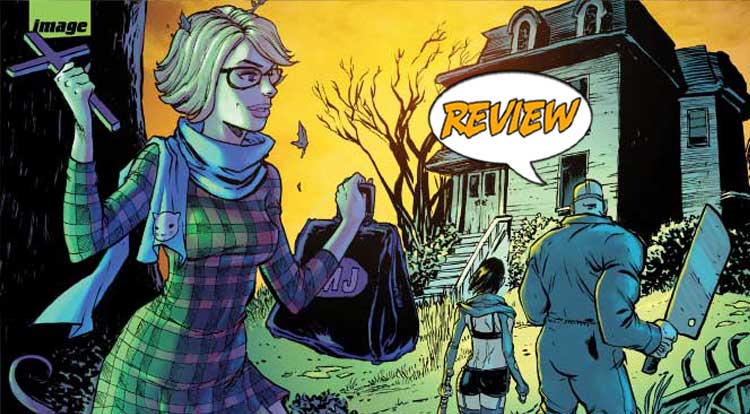 Not long ago, Cassie Hack’s best friend Vlad died.  Then, Cassie herself disappeared.  So, who in the world is this comic gonna be about?  Your Major Spoilers review of Hack/Slash: Resurrection #7 awaits! Previously in Hack/Slash: Resurrection: Cassie’s old friend Cat Curio and Pooch need Cassie and Vlad’s help with a case, and they are more than willing to help out.  But, will it turn out to be more than a goth investigator and her undead-ish partner can handle?

A CALL FOR HELP

It’s been a long time since I’ve read a Hack/Slash comic, but this one starts out in a way that is at once familiar and welcoming.  Cassie and Vlad have traveled for 12 hours to meet up with Cat Curio and her (incredibly disturbing) demon hound, Pooch.  Cat has been caught up in a situation with local ghost hunters who at first seem like frauds, but turn out to be much more sinister than we thought.  With Cat filming the entire situation, they investigate a local haunted house, leading to some shocking appearances and Cassie’s admission that she hates ghosts.  Not because she’s afraid of them or anything, but because they’re “all invasive and over-emotional” in public, which she amusingly admits says more about her than about the ghosts.  Everything goes badly from there, featuring some stabbings, at least one removed heart, some clubbings with a baseball bat and an ending that is both dark and kind of hilarious.

The first thing I notice about this issue is the art, as Celor gives a whole new take on Cassie and Vlad, one that evokes J. Scott Campbell at the same time as it reminds me of Bill Sienkiewicz, and I have to say I like it a lot.  Hack/Slash always has a slight edge of uncomfortable for me, given our main character’s nearly-naked attire, but Celor manages to balance goth fishnets and latex without the intense feeling of “Male Gaze”, something I really appreciate.  Added to that is Tini Howard’s first-person narration, maintaining the snarky teenage Cassie-who-grew-up-in-various-hellscapes-and-cannot-be-shocked of yore with what feels like a deeper look into her mind.  This issue is a little short of Vlad for my tastes, but I suppose he is the sidekick, and the interplay of Cassie and Cat makes for some great humor and drama.  The secrets of our married ghost-hunters are likewise both terrible and amusing, and the art doesn’t hesitate to show us exactly how weird they are.  (Also: Ew.)

While I’ve never been a hardcore Hack/Slasher, I have dipped my toes in the metaphorical water long enough to feel that this is a good take on her, featuring some really well-done sequences and making for a nice done-in-one introduction to Cassie’s life and times.  Hack/Slash: Resurrection #7 is the much-fabled “great jumping-on point”, giving us a strong single issue that informs the character and makes it easy to understand everything while not dumbing it down or muting the trademark splatterpunk aesthetic, earning a better-than-average 3 out of 5 stars overall.  If you already love Cassie, I think this book will make you happy.  And if you don’t, it’s not a bad place to start figuring her out.

Accessible to non-fans, well-drawn and unusual, featuring just enough gore and snark to make it all work...