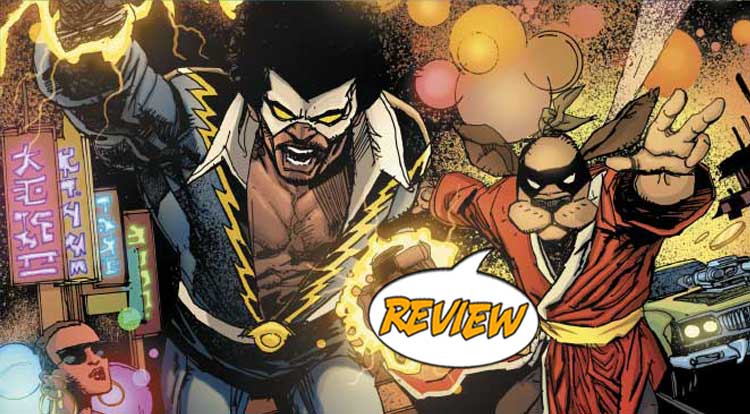 It's that rare case where NOT hearing someone say "jive turkey" will be a disappointment...  Your Major Spoilers review of Black Lightning/Hong Kong Phooey Special #1 awaits!
Featured

By Matthew Peterson on June 4, 2018 1 Comment
It's that rare case where NOT hearing someone say "jive turkey" will be a disappointment...  Your Major Spoilers review of Black Lightning/Hong Kong Phooey Special #1 awaits!

It’s that rare case where NOT hearing someone say “jive turkey” will be a disappointment. Your Major Spoilers review of Black Lightning/Hong Kong Phooey Special #1 awaits! Previously in Black Lightning/Hong Kong Phooey: Jefferson Pierce grew up on the bad side of Metropolis, returning home to find crime had overtaken his city.  Empowering himself as Black Lightning, he took on the forces of evil and proved that justice, like lightning, shall ever appear to some men hope, to other men fear!

When evil rears its ugly noggin, mild-mannered janitor Penry Pooch leaps into his convenient filing cabinet to transform into the greatest martial-arts master in all of cartoondom!  Quicker than the human eye, the number-one super-guy, Hong Kong Phooey!  Fanriffic!

Right off the bat, this comic hooked me, with a first-person narration explaining how Black Lightning recently met Bronze Tiger, Cheshire and Professor Presto three-on-one, and ended up going out a window to end the fight.  “I don’t like getting knocked through window, man”, intones Black Lightning to his old friend Penry.  The first sight of him, resplendent in his robes and mask is worth the price of admission, as we once again have the talking cartoon animals of HB rendered in a realistic fashion.  Penry and Jefferson set off (in Penry’s Plymouth Road Runner, no less) to find the scrolls that Presto is after, a secret text carrying the power of the God Fist.  I love the interplay of down-to-earth teacher Jeff against the mystical mumbo-jumbo of Penry’s kung-fu lifestyle, and when they not only lose the scroll to the villains but find that the store they found it in is gone?  Black Lightning’s puzzled response actually made me laugh.  With the help of Rosemary (who is nearly as skilled in the ways of combat as Penry here), our threesome confronts the now massively powerful Presto in battle, and Penry has to explain the real truth about the ways of Hong Kong Kung-Fu.  With his fists and feet.

The same things that kind of bothered me about the recent Super-Sons/Dyno-Mutt team-up work very well here, as the story is treated dead seriously, even with a talking dog as part of our titular duo.  Even the over-the-top parts of Black Lightning/Hong Kong Phooey Special #1, such as Penry forcing back a demon from beyond by sheer force of will, are played straight and the dialogue is wonderful.  As for the art of Denys Cowan and Bill Sienkiewicz?  The only word for it is perfect, whether showing fight sequences or mystical menaces in the sky.  Special points go to the panel featuring a photo of Penry during his tour in Vietnam, looking for all the world like a missing still from an alternative version of ‘Apocalypse Now.’  My biggest complaint about this comic is in the second feature, a quick 8-pager featuring The Funky Phantom that has lovely art by Scott Kolins but tries to make a point about gun safety.  The creators clearly mean well, and there is amusement value in seeing an actual “founding father” confronted with modern firearms, but as much as I appreciate what the story is trying to say, it ends up feeling like an uncomfortable lecture, which undermines its effectiveness.

Even with those issues, Black Lightning/Hong Kong Phooey Special #1 is an accomplishment, a one-shot of which to be proud, featuring incredible art from cover to cover, earning 4 out of 5 stars overall.  (And yes, there is a “jive turkey.”  And they totally pulled it off, too.)  I wouldn’t want this tone to be applied to all the Hanna Barbera characters (as I found out with the grimdark Super-Sons story), but for Hong Kong Phooey, it somehow works, even with the difficulty I have taking the flippant tone of the backup story in contrast to the seriousness of its subject matter.

The lead feature is epic in scope and tone, making it easily my favorite of this round of DC/HB books. The second feature... not so much.