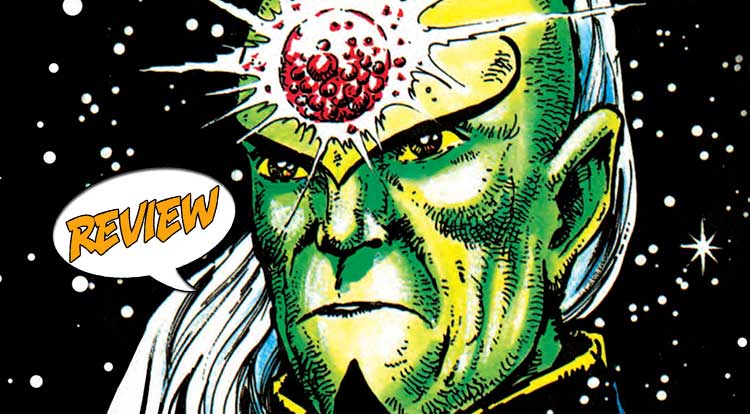 The anthology is often an overlooked format today, but when science fiction tales of shock and horror are being told by a green-skinned being from another world, it deserves to be collected. Let us take an early look at Rebellion’s upcoming publication, The Complete Future Shocks Vol #1. Previously in 2000 AD:  In 1977, the weekly science fiction magazine 2000 AD was being published by the comic subsidiary of IPC Magazines, Fleetway. British comic enthusiasts were being thrilled by the weekly adventures of characters such as Judge Dredd, Dan Dare, M.A.C.H. 1 and the time-traveling cowboy and dinosaur tale of Flesh. It was in the twenty-fifth issue, or prog, the alien Tharg made his presence know, and he’s been asserting himself and his own style of story ever since. Now Rebellion has begun to collect all of Tharg’s stories as The Complete Future Shocks Volume 1, arriving in stores June 27th.

ADVENTURES… IN TIME… AND SPACE…

The basis for the stories that make up Tharg’s Future Shocks is simple; the alien Tharg, an inhabitant of the planet Quaxxann, which orbits the star known as Betelgeusem, tell us lowly Earthlings and Earthlets tales of science fiction. These tales often seem to be going one way and then you get the twist, or stinger, at the end, which turns your assumption on its head. He has been in nearly every issue of 2000 AD, with the exception of a very short run where he was replaced by Vector 13, Men in Black. In fact, the only other character to have a longer run in the series is the most notable Judge Dredd.

AN INSTANT LIBRARY OF WONDER

The format is simple, Tharg introduces a story with a science fiction bend, and by the end, you get an, often horrifying, twist. The length of each story (two to three pages) would lead most American readers to believe these stories are simple filler to pad a page count. Not so, back in their day, they served as a proving ground for creators who would go on to become the most influential writers and artist of the day, many of them fueling the British Invasion into American comics.

Since there are so many stories in this one volume, let us take a quick look at a few of the eighty-five plus tales contained within. In Prog 203, we get the story Grawks Bearing Gifts. Here, Tharg tells a tale of Earth as they prepare for an invasion from the stars, only to be confronted by interstellar tourist. It all seems innocent, once it is discovered the aliens just want a place to relax and sightsee, but by the end of the story, we have a chillingly different outcome. The art here was by Q. Twerk and is one of the relatively few color sequences in the volume. The writer, a young Alan Moore, who would later go on to write the historic Swamp Thing and conception changing Watchmen. That is just one of several little gems by the future bestseller. In Prog 28, Kevin O’Neil writes and draws a quick one and a half page tale of a 100-year war between robots and Earth’s inhabitants, just not the inhabitants you are expecting.

On the other side, the artists are recognizable to nearly all fans of sequential art. Brett Ewins, Steve Dillon, Brian Bolland, Carlos Ezquerra and many more contribute to these early stories, cutting their teeth and preparing to define comic art for a generation.

Overall as a collection, the stories contained in The Complete Future Shocks Vol. 1 is great if a little dated. As a product of their times, many readers will know the basic stories and may even be able to guess the twist, but not always. Many of the plot lines are considered troupes now, but even among those, they are so wonderfully written and beautifully drawn that you get lost in them. For fans of the anthology format, this collection should be considered in the same class of greats such as The House of Mystery, Time Warp and even television anthologies The Twilight ZOmne and THe Outer Limits. Despite my previous statement, there are many surprises awaiting between these volumes. The length of the stories make them quick and enjoyable, and it is perfect for an entertaining pick-up when things are a little slow.

I would be shocked if you didn’t find a place for this collection on your pull list!