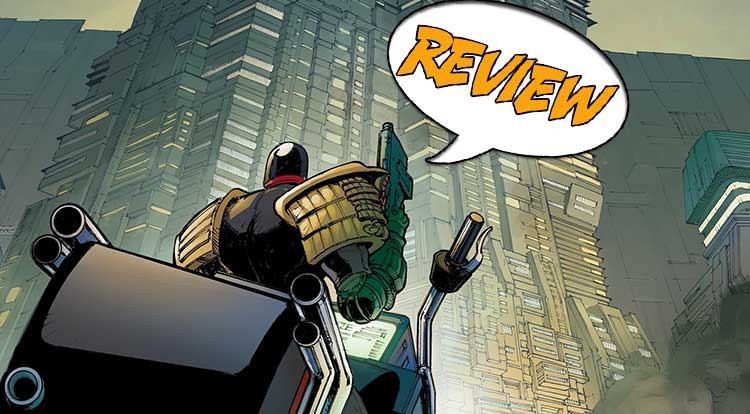 Contact with the Patrick Swayze Block is lost, and it is up to Judges Dredd and Beeny to find out why. Does Judge Dredd Under Siege #1 hold up, or will readers be underwhelmed? Previously in Judge Dredd: When all contact with the Patrick Swayze Block is lost, Dredd and Judge Beeny are tasked with investigating. As they battle lawlessness and rampant criminality, they discover a threat to the city that they must contain at all costs. – via IDW Publishing

UNDER THE RULE OF THE JUDGES

In the ruins of human civilization, Mega-City One acts as a beacon, nay, a sanctuary for the teeming remnants of humanity. Hemmed in by the Cursed Earth to the west, and the polluted Atlantic Ocean to the East, the city exists in near constant ferment. The only institution protecting the ordinary citizens from utter anarchy? The Judges. And the greatest, most feared judge of them all? Judge Dredd…

Judge Dredd has long satirized American consumerism, pop culture and its fascination with violence. The Judge’s rule as a fascist oligarchy, their word first and last in all aspects of city life. They are judge, jury, and executioner. And Dredd has long been their best man in the field.

Dredd’s singular devotion to the law is his only defining feature. He has no friends, no family, no interests, no hobbies, and no distractions from his endless pursuit of the criminal element. Mega-City One is his prime hunting ground. With unemployment above 90% and a general feeling of chaos held back by a thin line composed of the Judges, the city has always seemed on the edge of eruption.

Judge Dredd Under Siege #1 begins with a primer that displays, with brutal efficiency, the sort of man Dredd is. Breaking up an illegal football game with terminal efficiency, he offers a quip to a handcuffed player who will likely spend most of the rest of his life in the Iso-Cubes, ‘Medical help is on the way to assess your long-term cognitive health.’ What a guy, eh?

The story proper starts when Dredd, returning to the Grand Hall of Justice, is swiftly assigned to retrieve Judge Beeny, who has gone missing in one of the many colossal apartment towers, the amusingly named Patrick Swayze Block. There, Dredd discovers Beeny under fire from mutant infiltrators from the Cursed Earth, assisted by resistance forces made up of a criminal gang led by its leader, the Mayor.

The problem with Judge Dredd Under Siege #1 is that very little of the insanity of the Mega-City One, with its teeming masses and their bizarre customs, features here. This opening issue is in many ways much like a standard police procedural. There are definite echoes of the Keith Urban Dredd movie from 2012, down to the two Judges trapped inside an apartment block, forced to fight their way to the top floor to defeat their enemies.

As a result, there is a feeling of sameness to the story and of the characters. Without someone crazy to bounce off, Dredd comes across as even more po-faced and boring than normal. He’s reduced to little more than a conveyor belt for brutal one-liners and shooting criminals in the head. There’s entertainment to be had here, but it’s lost amidst a welter of scene setting and dull characters.

For all that, it is a solid, if unspectacular introduction to this series. If Dredd is a touch one note, at least he is true to his character. The city is the setting is also one note, lacking the scope that would set it above the mundane. However, while Judge Dredd Under Siege #1 does have the feel of being all set up in service of the chaos to come, it is a worthwhile introduction to that hoped for mayhem.

While writer Mark Russell does a fair job with the story, the true enjoyment comes from the art. There is a lot going on in Mega-City One, and artist Max Dunbar brings it handily to life. Check out the splash artwork on page 9. Dredd is foregrounded, but it’s the reactions in the stands that draw the eye, from the panic and despair of those arrested to the cheering of the watching crowd. Overall, the line work is clean, characters are recognizable from page to page and the panel layouts give the story a sense of pace and momentum the script otherwise lacks.

Overall, Judge Dredd Under Siege #1 is a reasonable opening issue. The promise of thousands of mutants flooding into Mega-City One likely means the scope of the story will branch out in a major way in coming issues. If that is the case, then getting through this introductory section will certainly be worthwhile.

Shows promise, but only if you’re prepared to slog through this opening issue…