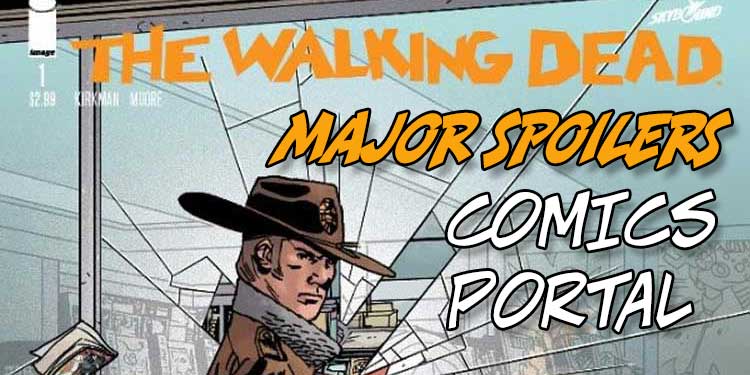 First, apologies that this column is a little late! I was busy at this year’s Megacon in Orlando, Florida, a terrific four-day convention! I do recommend going, especially if you haven’t been there before!

Now, as announced here on MajorSpoilers.com, The Walking Dead is celebrating 15 years of bites, betrayals, and beheadings this October!

So I thought I’d look over my experience with the book that redefined the undead as we get ready for the celebration. As included in the press release, Saturday, October 13th, will be Walking Dead Day in many local comics shops. I’m sure there will be appearances by the walkers and new Dead stuff in many a shop!

On that day, you’ll be able to access a 15th-anniversary variant of that famous first issue. The new cover will be by Charlie Adlard, who pencils the series currently, with colors from Dave Stewart.

Keep your eyes open for that in an upcoming Previews! The final order cutoff for WALKING DEAD #1 15TH ANNV VAR will be Monday, July 9th.

And why not a Walking Dead Day? There’s already a Batman Day in September! It will also be part of getting ready for the new TV season, which will air on AMC. Look for it to debut in October as well!

HOW I BECAME A FAN I was visiting Northeastern Pennsylvania and shopping at a LCS in Scranton that my brother and I would go to when we were visiting relatives once a month.

I happened to have a little extra cash, so I asked the store owner what he would recommend.

He pointed me to The Walking Dead.

I laughed! “Come on,” I told him, “this is a black-and-white comic! Nobody buys them anymore! Also, it’s zombies! They’re out of fashion. It’s VAMPIRES now.”

He told me, “Just buy the first few issues. I bet you’ll be hooked.”

He was right. I bought that first trade, and it began my years-long reading of the comic.

COMICS, TV OR BOTH? When the TV show began on AMC, I remember it being met with a large amount of skepticism. And it sounded very familiar. I heard a lot about how out of fashion zombies were, among other things. And it was a very short season! “Who would watch such a thing?” people asked.

Well, it blossomed into a huge hit. The companion series, Talking Dead, often beats out what’s airing on NBC at that time. And that’s not mentioning the main show!

Granted, some of the ratings have fallen in recent years. Hey, not everyone reads the comics as well. Time and money just don’t allow some of us to keep up with Dead, among other things. And some of us aren’t fans of the spin-off, Fear the Walking Dead. I haven’t seen it since the first season, although I know there are fans who love it more than the original. Sorry, I’m not in that particular group.

When I attend Star Trek/sci-fi conventions, I often host discussion panels, and Dead is one of the subjects I like to talk about. I often ask people, how many watch the show? Everyone’s hands go up. Then I ask, how many read the comic? Usually, it’s about half of the group. It makes it a little tough because discussing the books often contains spoilers for the show.

So the series garners a bigger audience. And that’s cool. I am a fan of both, and I have to say that every time Darryl appears on the small screen, my attention level rises. Why? Because I’m about to see something I haven’t seen before in the comics! I do wish they would get him in there someday, though.

One thing that the celebration will contain will be special covers that include some local stores. This will include the local shop’s logo incorporated into the cover.

Of course, be sure to reach out to the store you frequent for more details on that and other Dead stuff.

I know this drives some collectors mad because they want every cover possible. Maybe for once you’ll have to get what you can and let this kind of thing help local shops more than collectors? Maybe?

I’m sure as we get closer to October, word will start coming out about where stars and folks like Robert Kirkman will be appearing on that day. Again, stay tuned!

It’ll still be another one of those days when it’s great to be a comic fan! I always appreciate them!

What do you think? Do you plan to 15th anniversary cover? Going to the Walking Dead Day? Are you a big fan of the Dead? Or do you get puzzled when people start talking about “walkers” and zombies and such? Whatever your opinion, be sure to share it in the space below!