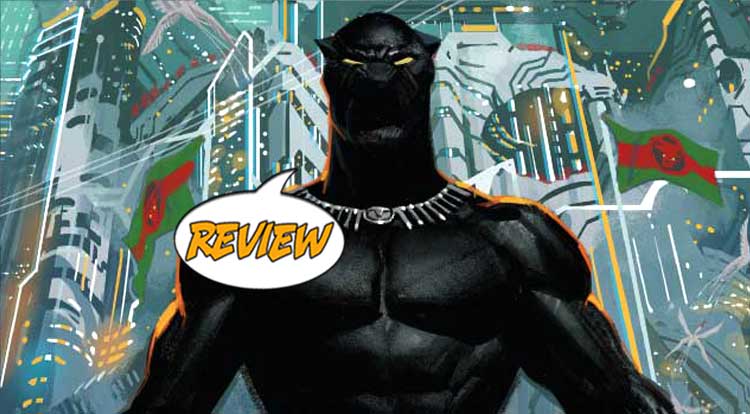 What is the Galactic Empire of Wakanda?  Your Major Spoilers review of Black Panther #1 awaits! Previously in Black Panther: Never invaded throughout its long history (except for a few times recently that probably already got retconned away), Wakanda is a shining bastion of technology in the jungle.  King T’Challa thought he understood how vast his homeland was and how far its influence stretches, but…  he’s about to find out how wrong he was.

This issue opens with a history lesson, albeit one for history that may not have happened yet, detailed the 2000 year history of the intergalactic empire of Wakanda.  Immediately afterward, T’Challa awakens from a dream of his former wife urging him to come back to her.  (Said, wife, for those not in the know, is the X-Man Storm, who is drawn super-dreamy in these pages, literally and figuratively.)  He is dragged from his bed to return to work as a “mule” in a strange space colony, one in which he is a slave and treated as such by the alien guards.  The Black Panther isn’t likely to have such treatment, breaking free and going on the run, only to be brought down and dragged back.  There’s some intrigue with on a spacecraft (where the captain finds out about T’Challa’s one-man uprising, which makes the timelines of the book a bit confusing) conflict with another prisoner named Daoud and a couple of freedom fighters who may or may not be M’Baku and Nakia but do use their names, leading to T’Challa being recruited by the captain and given weapons and armor to help overthrow the empire…

I have to say, this is one beautifully drawn comic from beginning to end.  The action sequences are phenomenal, and Acuña does glowy future space-technology like few others can.  The coloring adds to the effect of the art, which works to help give the entire issue a dreamy, unreal air.  That’s both good and bad, because it’s not 100% clear if we’re actually seeing the real T’Challa, M’Baku and Nakia or just people using the names of legends from their past.  If this is the future, how did our hero get here?  Moreover, how can he get home?  It’s intentionally left open-ended (this is chapter one, after all) but it leaves the reader as confused and disoriented as Black Panther by the end of the book.  The last page reveal of his new suit, which features an open-bottom mask ala Batman makes me really happy, though, and while it hasn’t really been set up in recent months, his attachment and love for Storm is a nice hook for this story.

BOTTOM LINE: QUITE THE MYSTERY

In short, this comic is a puzzling read, but that doesn’t make it a bad one.  Acuña’s art is excellent, the story has a lot going for it and the main character makes a good showing of himself, leaving Black Panther #1 with a hard-earned 4 out of 5 stars overall.  There’s some confusion about what is happening, but it is clearly intentional and meant to keep the reader as confused as the protagonist.  I don’t want issue after issue of it, but as an introduction, this one is effective and shocking…

Excellent art helps to overcome the difficulties of the first chapter of a story full of mysteries...