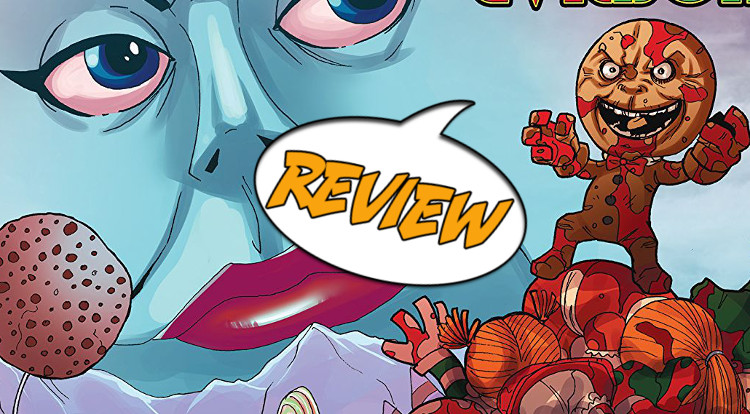 I think if you read the title “The Gingerdead Man Meets Evil Bong #2” and made it this far into the opening sentence, you’ve already clicked for the review…so let’s begin. Previously in Gingerdead Man Meets Evil Bong: The Gingerdead Man, going from a literal piece of turd back to the Gingerdead Man we all know(?) and love, killed some people in a head shop run by the Evil Bong.  Eebee (the bong) exiles him to Bong World.  Unfortunately, the Wizard of Bong World (after much murder) grants Gingerdead Man a wish.  To return to the real world with a new body.  I swear I’m not making any of this up.

*To start, this reviewer will neither confirm nor deny that he was under the influence of any substance will reading this comic or writing this review.*

The title is what got me.  Nothing else.  I was fairly certain there was a C-level horror movie called The Gingerdead Man but never gave any further investigation into the subject.  I’d seen some of the character’s previous comics solicited or an issue on the stands in the store.  Never cared.  But they went and added The Evil Bong and my curiosity couldn’t be stopped.  I then ended up falling down a spiraling hole I’m not sure I’ll make it out of.

I bought and read the first issue, because of course with a story like this I needed all the specifics.  By the end of issue one, I had a pretty good idea what the second would be like and I wasn’t too wrong. The Gingerdead Man Meets Evil Bong #2 was a bit more disturbing in that Gingerdead Man comes back from Bong World in a body that seems to be a weird amalgam of cookie and human.  He looks like a cookie, but is human-sized…and with genitals.  There are a lot of puns in this comic, probably at least one on every page and none of them good.  It comes to the point of predictable.  Gingerdead Man kills someone, makes a pun.  The concept and story clearly were made while high as things escalate even more with the return of a character from the previous Gingerdead Man mini-series.  She’s part cybernetic, along with other of the villain’s victims, now with robot upgrades and pun-filled names like “Sir-Cut Face”.  Since his face was cut off…

I’m sure the comic is matching the tone of the films, there can be no doubt.  But I don’t think it translates to the page well if so.  In fact, the parts that made me laugh were instead regular dialogue between characters.  Synthia, Lana and Eebee travel to Planet Kush to talk with the Council of Bongs and the interaction between the three council members was actually pretty funny.  Unfortunately, it doesn’t save the comic from being what I figured it would be from the start.  A comedy-horror story full of bad jokes, gory kills and over the top pot references.

“HIGH” LIGHT OF THE COMIC

Sergio Rios handles art duties and has a style that is a great match for the tone of the story.  A comic as wacky and off the wall as this wouldn’t work well with a more realistic style.  Rios draws characters nicely and has a good sense of layout and action.  The gore is also well done, which is a requirement for this book.  My main criticism is the lack of backgrounds and instead the use of a solid color or gradient.  When there is one, it is drawn with minimal detail.  But the character designs are cool and both Evil Bong and Gingerdead Man look like their movie counterparts.  The art is certainly the best part of the book.

Before reading The Gingerdead Man Meets Evil Bong #2, I barely even knew what The Gingerdead Man was, let alone the existence of an Evil Bong.  In my “research” for writing this review, I have now found that there are at least three (!) Gingerbread Man movies.  On top of that, Evil Bong was a movie before her appearance here, starring Tommy Chong no less (honestly not surprising)!  AND ON TOP OF THAT,  there is a Gingerdead Man vs. Evil Bong movie too!!!!  What is going on?!  Whatever trailer I watched for Gingerdead Man looked like a high budget home movie, but I’m so intrigued and confused I might just watch it.  And the others.  Maybe they’ll change my mind on the comic, but for now this is a skip unless you’re a huge fan of this franchise.  Being high doesn’t make it more enjoyable, just the groans more giddy.  At least, that’s what I’ve heard…

Not even medicinal herbs can help this comic's story and jokes better. Recommended for fans of the franchise only, those that may be out there.