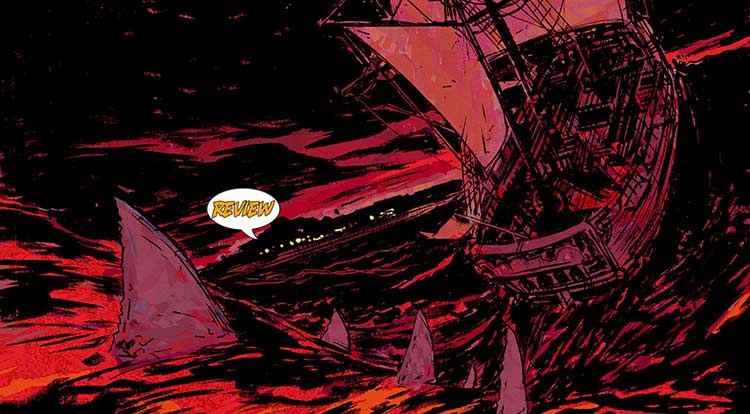 We’ve seen the revenge story done time and time again in westerns and fantasies, modern day and science fiction, even with superheroes. A man is out to gain vengeance on those who wronged him/killed his family/took his honor/yadda-yadda. It gets bloody and many sacrifices are made. Shanghai Red has a similar story: shanghaied to serve on a sailing ship, tortured and beaten, forced to submit, a family dependent on them left behind. It sounds a little familiar, but when the revenge seeker is a woman, then there is a completely new level of pain to be explored. Let’s check out Shanghai Red #1 from Image Comics, and find out just how many. Previously in Shanghai Red: When people think of the term Shanghai, it normally brings up visions of eyepatches, cutlasses and young men kidnapped and forced to participate in the grand tradition of piracy. Historically, it was quite different, especially along the western coast of the United States. Merchant vessels, unable to find volunteers for ocean voyages that could last years, would often employee ‘recruiters’ to fill out their need. By hook or by crook these recruiters would trick, blackmail, kidnap or even just buy the debt of unwary landlubbers and keep them confined until they were far at sea, forcing them to work the ship or be thrown overboard.

As the merchant vessel Bellwood prepares to complete its two-year journey to their destination of Shanghai, China, the first mate approaches the indebted crew and offers them a deal: sign on as official crew or make your own way home. The captain had purchased the “debt” of these men, and now it’s been paid and he has no hold over them, other than the threat of abandonment. All the men agree, except one, a red-haired man named Jack. Jack refused the offer and does so by cutting the throat of the first mate, and then announcing to the rest of his fellows that he plans to kill every sailor on the boat, take it over, and is going to do it with their help or not. It is bloody and violent, but they finally succeed in capturing the ship. As the bodies are being disposed of, the rest of the men find out that Jack is not a he at all, but a she. She tells them to call her Red, and that she wants their help getting them all home. They have little choice but to agree. So begins Red’s journey back to Portland.

She tells her first mate, Boston, some of the details of her story. How she and her family left the East for the West, how she had to disguise herself as a man to gain employment in the lumber camps, how it felt right. Then something happened and she was shanghaied, forced to leave a family that depended on her. Now, years later, she is determined to find her family and stop the men who abducted her from ever doing it to anyone ever again, no matter what the cost.

Christopher Sebela has taken a classic trope, the revenge story, and turned it on its head by making the anti-hero into a woman. Additionally, instead of making the woman a weak victim who had to learn to fight back, Red leaps into our story whole cloth, as a dangerous force to be reckoned with. Even her backstory defines her as capable and deadly, and you are shown she has many ghosts haunting her from her past actions, most likely before she was abducted. That is what draws you in. From the revelation of her womanhood to her story of sacrifice and hardship, to her matter of fact plan to kill, you start rooting for her in a way that would have seem obligatory if she were a man. However, as a woman, she earns your respect in a way no male character could have. You begin the story eager to see how it will play out if she can really fulfill her promise of carnage.

The art is very raw, with Joshua Hixson and Hassan Otsmane-Elhou delivering a moody, heavy line of art that matches the dark story. From the amazing cover to the images of Portland as the ship comes into port, you are pulled in and made a part of the story. Panels are cinematic, without being overpowering. The art provides a voice to the script and contributes to the rawness of the story. I look forward to seeing more of their work.

BOTTOM LINE: DON’T LET THIS ISSUE SAIL PAST YOU

As I stated, Shanghai Red could have very easily been an average revenge story relying on tough guy attitudes and blood and gore. What the team of creators delivers to us instead is a compelling story that pulls you in and makes you feel for the main character, whether she wants you to or not.

Shanghai Red #1 from Image Comics is a solid buy, pick it up today.

The revenge story with a twist, you will cheer the protagonist on from the very beginning….