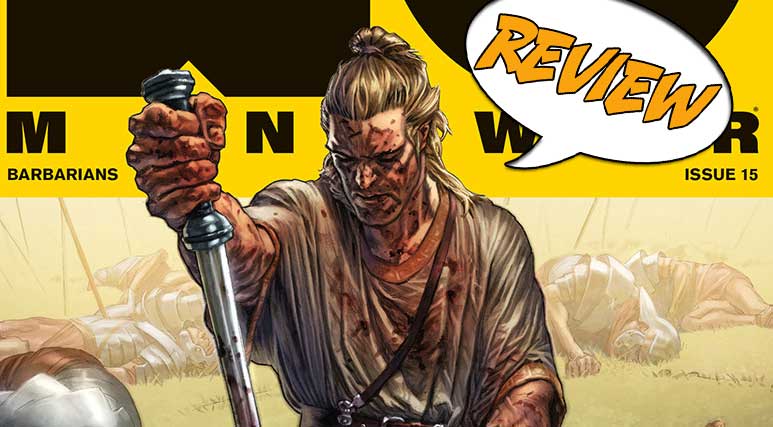 A warrior from ancient history wielding what is possibly the most powerful weapon ever created, Aric left Earth and found himself on a faraway planet where he changed their world forever. Now, the plea of a friend calls him back on Earth, just in time for war… Previously in X-O MANOWAR: After suffering a devastating personal loss and leaving Earth to cope, Aric found himself on an alien world, rising quickly through the ranks of the military until he eventually became their Emperor. After a betrayal by those closest to him, he is disposed of his throne. Making amends with his betrayers, he decided it was time to end it all. However, a random message from home calls him back to face what he left behind. Unfortunately, he has found himself courted by opposing sides in a brewing war. Now, high above Earth, he looks down on the conflict, and his sentient armor, Shanhara, recalls a time in his past in an effort to help him decide his course of action.

CAN YOU GO HOME AGAIN?

At the end of the previous issue, we are told Aric’s story will continue in Harbinger Wars 2, Valiant’s 2018 crossover event. This issue seems to pick up during that series with Aric high above the Earth looking down during – or directly after – some sort of upper atmospheric battle. He has a choice to make and he seems to be having trouble making it. As a way to help him decide, Shanhara, his sentient alien armor, calls forth to his memory a time in his distant past, 393 A.D, and the events of his tribe’s dealings with the Roman Empire. During this flashback, we see Aric defy his uncle, leader of his people, for the sake of one individual and events are set into motion for his path to cross with a storytelling ex-laborer (i.e. slave) who has left the Zambia copper mines with an agenda of his own, led by visions of a golden warrior. By the end, Aric, with his close friend Gafti, find themselves far from their Visigoth lands and in the middle of a fight for their lives.

THOSE WHO FORGET THE PAST…

X-O MANOWAR has always had a unique place in the Valiant universe. It is the story of a man out of time, gifted with a most powerful weapon, trying to regain a part of his past while navigating a world which is far different from the one he was reared in. While the previous story arc showed how Aric’s good intentions may not be the best for the people he is trying to help, this story goes into his past and begins to show him how previous decisions he made had specific consequences, and we can guess that something of a similar situation is currently unfolding within Harbinger Wars 2.

Matt Kindt’s storylines have given time to allow Aric to grow as he tries to find the best way to help, or not help, those he sees as under his charge. He is a warrior from a bloody past and wields power coveted by many. Kindt has shown Aric has growing to realize the multitude of ways his actions affect others, how he is now willing to sacrifice what he wants for the good of others. However, the Aric featured in this story is still a man of his era, and we see a definite difference in who he was and the man he becomes. The flashback may be a way to set up Aric’s decision in Harbinger Wars 2, but it also shows us masterfully how he has grown as a warrior, leader, and man.

Trevor Hairsine’s art, with inks by Brian Theis with Stephano Guidano, give a pleasingly atmospheric slant to the story. The art team combines for a very gritty style that conveys the bareness of the era in which the story takes place. It looks ancient, in a wonderfully satisfying way. The panel composition is clear and fluidic; your eyes flow with the story effortlessly. This, combined with the wonderful colors of Diego Rodriguez, put you in 393 A.D. It is a visual callback to a style of low-fantasy that is too often forgotten when artist try to fill the page with bright, vibrant colors. The subdued color pallet, line and ink work, and the compelling story all combine for a wonderful reading experience. Add in Lewis Larosa’s stoic and moving cover, and you have a wonderful package that satisfies on many levels.

After finishing the last issue, I had expected the story to pick up a little more immediately within Valiant’s big crossover, but it does not. While this issue obviously teases the actions that happen during Harbinger Wars 2, it manages to give a story that negates your needing to know what exactly those actions were: Aric is in conflict, his decisions will affect many, and here is his process of how he decides what to do.

Matt Kindt is the writer of Harbinger Wars 2, so we know that this issue most likely will tie in well with that series. With this issue, Matt Kindt continues to show us that he is continuing to lay the foundation to make Aric one of the most fascinating characters in the Valiant Universe.

It has an irresistible story that uncovers more of the main character’s past and builds on their currently evolving state at the same time. Make sure you pick it up.