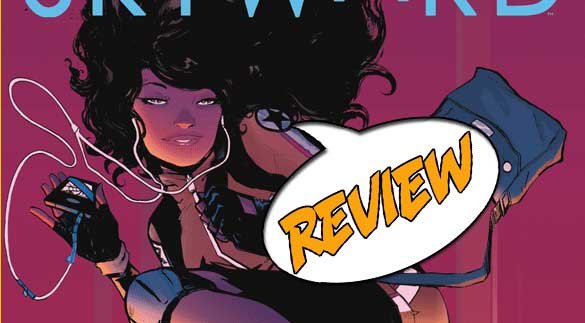 Gravity is constant which no one thinks about, but everyone depends on. Have you ever thought about what would happen if it disappeared? How would our lives change? We find out one possible outcome in SKYWARD #2 from Image Comics. Previously in SKYWARD: No one expected it to be the day. It started just a day like any other; people went about their lives as they always had, getting ready for work, for school, for life. Nothing special at all, no warning. Then G-Day happened, and gravity pretty much went away.  Nathan Fowler, scientist, lost his wife, and Willa Fowler, just a baby, lost her mother. She just floated away…

GRAVITY, IS WORKING AGAINST ME…

Now, around twenty years later, the world has adapted as best possible. Those who can afford it live on the ground with grav-boots to keep them grounded, while others use simple tethers systems and skill to lead what has become their normal lives. For some, little has changed, and others, it is a struggle to survive.  Willa Fowler is an adult now, working for a courier service to deliver packages wherever they need to go. Her father, Nathan Fowler, is a shut-in who has not left their rented apartment for twenty years. He was a scientist before G-Day, in fact, he and his college, Roger Barrow, warned people that G-Day was coming. Barrow used that knowledge to get rich, and Fowler began to work on a way to return gravity. Now he tells his daughter he’s found it, but she can’t bring herself to believe him. After finding out that Barrows, now a multi-millionaire, and her father were once friends, Willa goes down to the streets to meet him and convince him to see her father and maybe help him. However, Willa is about to find out that living a grounded life may not be all it seems.

GRAVITY, WANTS TO BRING ME DOWN…

Trying to imagine a world with lesser or no gravity is a daunting task. If you want to be hard science about it, there are all sort of repercussion that would happen, including a loss of atmosphere. In SKYWARD, creator Joe Henderson (showrunner for television’s Lucifer), co-creator and artist Lee Garbett (Lucifer, Batman, 2000 A.D.) have created a glimpse into a world of little to no gravity, and make you instantly believe.

Joe Henderson’s dialogue is sharp and snappy. It reads effortlessly and each character has a distinctive voice, adding to the believability of the situation. You start to care what happens to these characters quickly, from Willa, young and reckless, to her father, a haunted recluse, and even Edison, whose loss of legs is negated by G-Day. They all seem real and living individual lives, not just there to serve the main character.

Lee Garbett, a veteran artist with multiple credits under his belt, gives a great showing. From his amazing image of the new ring around the Earth, made of people and things, who just floated away, to the naively endearing looks on Willa’s face as she adventures down to street level; his art adds little touches you do not realize until you think about their real purpose. Characters with big hair show and floaty pony-tails show how hair follicles would just float unaided. A notebook with a pencil tethered to it is only practical. A character missing his legs from the knee down having straps around his pants legs to keep the openings closed. It’s the little things that show an attention to detail and bring the world to life.

There are many science fiction comics out there. They range from pulpy to space opera, to horror and beyond. Skyward is a book that adopts a sci-fi concept, what would happen with no gravity, and molds it; not to tell the story of the science, but of the people and how they adapt.

Skyward #2 is a smart, fun, entertaining book that is a joy to view. It has great pacing with just enough sub-plots introduced to explain that there is a lot more going on just below the surface. What is it like in areas outside of Chicago? What about the (now literal) fly-over states? What secrets are Willa’s father and Roger Barrows hiding? How have things like farming changed? You wonder about this, but you get the feeling that it has been thought out and we will get a chance to touch on it in the future. In essence, you want to know more about the world and how it works, which is a sign that the creative team is doing a good job.

If it’s not already, Skyward #2 should be anchored in your buy list.

A fun book that takes an interesting premise and makes you care about its characters.