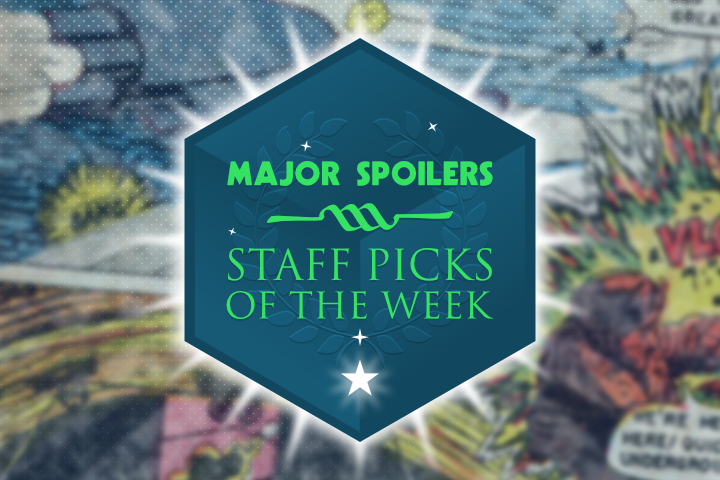 BLACK PANTHER #1
Writer: Ta-Nehisi Coates
Artist: Daniel Acuña
Publisher: Marvel Comics
Cover Price: $4.99
SOLICITATION: A bold new direction for the Black Panther! For years, T’Challa has fought off invaders from his homeland, protecting Wakanda from everything from meddling governments to long-lost gods. Now, he will discover that Wakanda is much bigger than he ever dreamed…

Across the vast Multiverse lies an empire founded in T’Challa’s name. Readers caught a glimpse of it in MARVEL LEGACY #1. Now find out the truth behind the Intergalactic Empire of Wakanda!

MATTHEW: I’ll read Acuña on anything, but with this writer? I’m sold, sight unseen… EL CID – THE CONQUERER
Writer: Gary Reed
Artist: Wayne Reid
Publisher: Caliber
Cover Price: 9.99
SOLICITATION: El Cid tells the story of the later life of one of history’s greatest warriors. As Spain was undergoing chronic warfare from the wave of Islam sweeping into the Christian nation, small kingdoms were carved out of the land. The Cid was instrumental in the quest to unify Spain under one ruler.

Banished by his own King, El Cid continued to bring victories in the name of his Lord and would fight with and against both Christian and Muslim. In this tale, the events leading up to the Cid’s attempts at unification and his success at Valencia are covered as well as the enduring legend of his last ride into combat.

RODRIGO: I read El Cid a long time ago, and had never seen the Charlton Heston movie. I was very surprised and annoyed when I would bring up the character and people would characterize him as a champion for christianity against the moorish hordes. This adaptation at least seems to center him closer to the original lyric, as a free agent that fought and befriended both Moor and Spaniard in a war for his king’s favor. THE PRISONER #2
Writer: Peter Milligan
Artist: Colin Lorimer
Publisher: Titan Comics
Cover Price: $3.99
SOLICITATION: The cult TV series comes to life in a brand new comic series by writer Peter Milligan and artist Colin Lorimer! Timed to coincide with the 50th anniversary of the first US transmission, this new series transports readers back to the mysterious village where everyone is a number!

MATTHEW: After an intriguing first issue, I’m willing to see where this new take on The Village ends up. Is it too late for Number Six and/or Number Two to appear? Fingers crossed that it’s not… STAR WARS: THE LAST JEDI ADAPTATION (2018) #2
Writer: Gary Whitta
Artist: Michael Walsh
Publisher: Marvel
Cover Price: $9.99
SOLICITATION: The Resistance has found Luke Skywalker! But the First Order is hot on their tail…and they are out for blood. Join writer Gary Whitta (ROGUE ONE: A STAR WARS STORY) and artist Michael Walsh (STAR WARS ANNUAL, HAWKEYE and THE VISION) as they take on the adventures of Force prodigy Rey, ace pilot Poe Dameron, and ex-First Order recruit Finn from the hit blockbuster STAR WARS: THE LAST JEDI – featuring never-before-seen scenes of your favorite characters!

RODRIGO: I did not like the Last Jedi, but I’m always really curious about adaptations like this. Will they add something? Change something? Even if they don’t what will they focus on? Which line gets a whole panel? Which line is just part of a string of bubbles? TEENAGE MUTANT NINJA TURTLES: URBAN LEGENDS #1
Writer: Gary Carlson
Artist: Frank Fosco
Publisher: IDW
Cover Price: $3.99
SOLICITATION: This is it, fans! You demanded it, and IDW Publishing listened! The entire Image Comics TMNT run (a.k.a TMNT Volume 3) reproduced for the first time ever in full, four-color glory! Join creators Gary Carlson and Frank Fosco as they take the Heroes in a Half-Shell on some of their most amazing and dangerous and bizarre adventures ever… culminating in three brand-new issues by Carlson and Fosco to properly close out this long-beloved storyline at last! In this premiere issue, the TMNT and Master Splinter are attacked in their lair by a group of cyborgs led by the female ninja called Pimiko. Before the attack is over, one family member will fall… and one will be lost! Don’t miss your chance to get in on the ground floor of the entire TMNT Image experience!

RODRIGO: The solicitation is kind of understating it. The Image run of Teenage Mutant Ninja Turtles was really nuts! At least it seemed that way from the sporadic purchases I made whenever I had money for comics. THE TERRIFICS #4
Writer: Jeff Lemire
Artist: Evan Shaner
Publisher: DC Comics
Cover Price: $2.99
SOLICITATION: “THE GIRL FROM BGZTL”! Return with the Terrifics to the Phantom World! As our heroes continue their trek through the multiverse (dark or otherwise) to find a cure for the condition that binds them together, their journey brings them to the home planet of Phantom Girl. This is one tearful reunion you do not want to miss! Plus, a giant space squid attacks! That’s right, a giant space squid!

MATTHEW: I’m telling you, this book has me more excited than any DC book in a couple of years… It’s the strongest of the New Age Of DC Heroes line by far… WITCHFINDER: THE GATES OF HEAVEN #1
Writer: Mike Mingola, Chris Roberson
Artist: D’Israeli
Publisher: Dark Horse Comics
Cover Price: $3.99
Release Date: May 23, 2018
SOLICITATION: A series of occult events mystifies the man known as the Witchfinder, but even more surprising is the revelation that he is not alone in exploring the paranormal in London. When a personal invitation arrives from the palace, Sir Edward Grey is pulled even deeper into underground supernatural exploration alongside new allies in the race to stop a mad scientist from destroying London in his pursuit of mystical power.

STEPHEN: I’m not familiar with Sir Edward Grey, but this series is part of the greater Mingola-verse, and with Chris Roberson at the helm, the story will be fantastic. Definitely worth picking up this week.