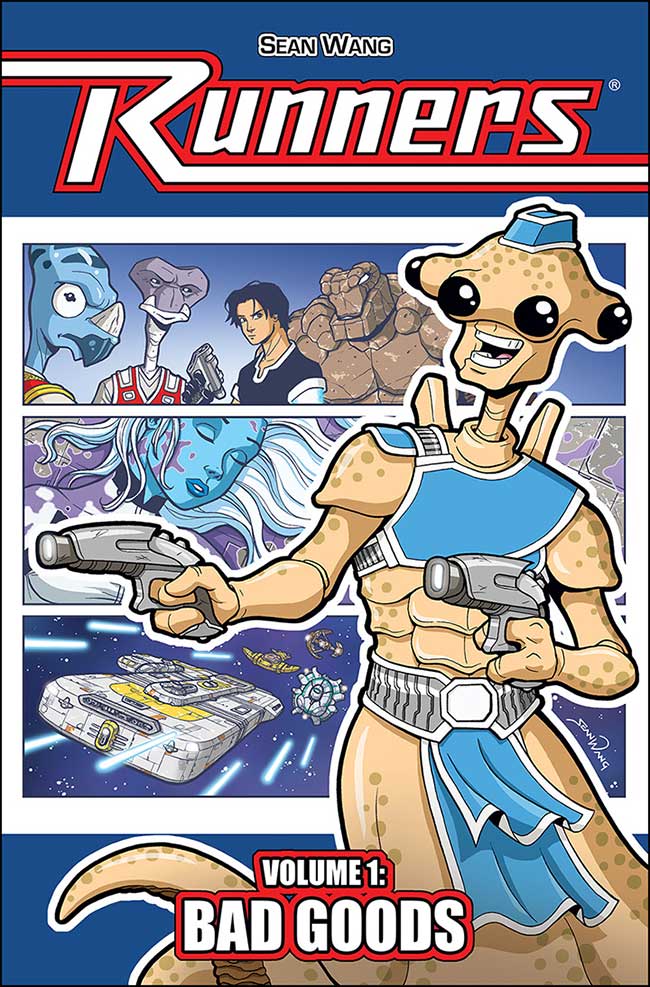 After a long hiatus, Runners, the fan-favorite sci-fi adventure series about alien smugglers, returns, starting with a new color edition of Volume 1: Bad Goods. The artwork, originally published in black-and-white, is now being colored by series creator Sean Wang, and a Kickstarter campaign has just launched to fund the printing of the new version of the highly-acclaimed graphic novel.

“For the past several years, I was focused on freelance work,” says Wang, “but the intent was always to use that freelance to build up the coffers so that I could tackle Runners full-time. And that time has come! I spent a lot of time last year figuring out the entire remainder of the series, which will be another 8 books total. With every major plot turn and character arc now figured out, I am ready to jump back into the series and continue work on it until it is done.”

“I was ready to start production on volume 3, having already scripted the entire story arc,” continues Wang, “but then realized that with an ongoing color comic series, the first book still being in black-in-white was an inconsistency and possible deterrent to new readers jumping onboard. I really want to open up Runners to as many comic readers as possible, so I decided that I needed to get volume 1 into a colored format.”

The newly-colored Runners Volume 1: Bad Goods will be 176 pages and include all the features of the original black-and-white version, as well as some bonus content new to the colored edition. The story centers on reluctant captain Roka Nostaco and his rag-tag alien crew of smugglers as they try to complete a particularly dangerous run for the mob that quickly spirals out of control.

“I’m very excited to finally re-issue Volume 1 in color, something Runners fans have been wanting for years, and I’m even more excited about continuing the series with volume 3 later this year. I hope all fans of sci-fi and fun adventure stories will give the series a try during its Kickstarter campaign. With the first book in color, now is the perfect time for new readers to get volumes 1 and 2 and see what the buzz is about. And for new and old fans, volume 3 is right around the corner!”