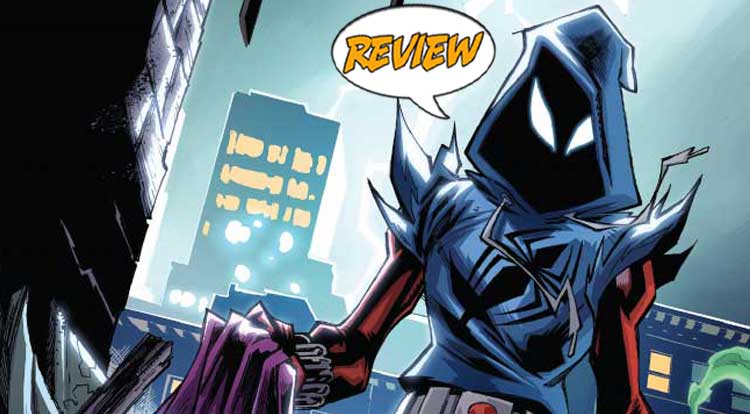 Thanks to his own bad decisions, Ben Reilly has become aware that he is  in danger of eternal damnation.  That’s heavy.  Of course, the new villain in town isn’t going to let him become the better man he hopes to be.  Your Major Spoilers review of Ben Reilly, The Scarlet Spider #18 awaits! Previously in Ben Reilly, The Scarlet Spider: No longer the Jackal who tried to destroy his “brother”, Spider-Man, Ben Reilly has settled down in Las Vegas to try and get his hero gig back on track.  Working for Cassandra Mercury, a casino owner whose daughter is gravely ill, Ben now works to try and make himself a better man and using his science knowledge to try and find a cure.  There’s also Mysterio floating around…

THE DAUGHTER OF MYSTERIO

Scarlet Spider #18 opens with Ben in hot email-reading action, working his way through a seemingly endless series of rejections by big companies and researchers to assist in his search for a cure for Crook’s Disease.  Before he can get over that, his Spider-sense starts ringing like a bell, causing him to seek out his boss and discover that she has hired Mysterio’s daughter (who goes by “Misty”, which I sort of hate) to make a giant David Copperfield-style spectacle out of disappearing the entire building.  Their conversation is short, but makes it clear to Ben that he has little time to act, and calls in a couple of favors.  While he and Dusk (from the short-lived ‘Slingers’ about fifteen years ago) wait outside, the OTHER Scarlet Spider, Kaine, slips inside the casino with his camouflage abilities.  When Mysteria makes the building disappear, she and her criminal dad are ready to capitalize, until our heroes arrive.  As for the building, it’s in another dimension, one that Kaine is pretty sure will be fatal.

The last page reveal is pretty successful in “Oh Crap” terms, but that is the most successful part of the issue in story terms.  The big jump from “working on a cure” to “fighting off Mysteria” feels sudden, and it becomes difficult to follow things without multiple reads.  When Kaine shows up, we spend a full three pages with him without any real explanation (and at no point in the issue is there an explanation of Kaine or any attempt to let us in on why there are two Scarlet Spiders in play.)  Moreover, Araujo’s Scarlet Spider figures are a little bit lumpy (especially the heads, a real problem with Kaine’s sleek black headgear), a problem that occurs throughout the issue.  The first appearance of Mysteria has her in a tiny, revealing dress that might have been meant to be sexy, but the unusual proportions and strange draping of the fabric make the panel puzzling instead.  Indeed, except for the last-page reveal that the casino is somewhere Marvel fans should know (which, to be fair, involves characters who are meant to look weird and lumpy), the layouts and construction of the art is problematic at best.

This issue just doesn’t hold together, which is a shame, drawing on multiple elements of Spider-Man history as it does.  There are a lot of fun things to be done with the two Scarlet Spiders clashing, Mysteria and Mysterio and Ben Reilly trying to make another go of things as a solo hero.  Unfortunately, Ben Reilly, The Scarlet Spider #18 has weaknesses in art and in story construction/plotting that work together to keep those fun things from truly coalescing, earning a disappointed 2 out of 5 stars overall.  The cover is pretty excellent, though…

There are a lot of plot-related moving parts welded to art that doesn't feel quite up to the task, not to mention TWO different Scarlet Spiders in play...