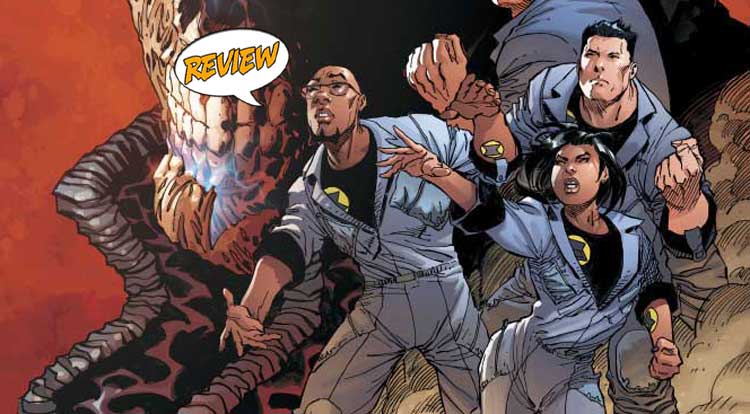 Once upon a time, four adventurers survived certain death, and set out to become heroes while they lived on borrowed time.  Now, a new generation arises.  Your Major Spoilers review of New Challengers #1 awaits! Previously in New Challengers: Waaaaay back in 1957, a plane crash miraculously left Red Ryan, Ace Morgan, Rocky Davis and Prof Haley stranded, but impossibly alive.  Vowing to use their borrowed time to the fullest, the four men (each of whom was unusual, including a top-notch fighter pilot, a champion boxer, a skilled scientist and a daredevil) teamed up as The Challengers of the Unknown to keep others from meeting the fate that was delayed for them.

That, however, was many years ago…

We open with a cryptic scene, as a heavily bandaged man and his pilot battle their way through a heavy storm in the Himalayas.  When the pilot refuses to take any more, he is thrown from the craft, while Bandage Man brings the vintage biplane in for a rather explosive landing.  We don’t see what he’s seeking, only a broad smile under his coverings before we cut to Trina Alvarez, suddenly arriving in an underground chamber.  She doesn’t know where she is, or how she got there, but three more people arrive in short order, all confused about their whereabouts.  The are greeted by their new host, a man called Prof (Hmmm!), who informs them that they are now Challengers Of The Unknown.  Stranger still, their remaining life is measured by the strange hourglass tattoos that they have all unexpectedly gained…

Oh, and also, they’re all dead.

A NEW TAKE ON “BORROWED TIME”

The biggest curse of the shared DCU being nearly a century old is that much of this feels familiar: The Bandaged Man reminds me of DC’s Silver Age military hero, The Unknown Soldier in his presentation, while the New Challengers strange new status quo feels like the classic Secret Six, under the thumb of Mockingbird.  That said, New Challengers #1 makes for a very successful presentation, balancing out action with exposition, showing us vividly what happens when you give up your borrowed time (RIP Spyral Agent Robert Brink) and setting the team out on their first impossible mission.  I don’t usually like Andy Kubert’s art, but being paired with Klaus Janson adds a new dimension to the visuals and more depth to the facial expressions.  The sight of a giant crab bursting out of the ocean is particularly lovely, while Snyder and Gillespie manage to pay tribute to what has come before while making it clear why there’s a new team.  There’s a sequence involving a museum of Challengers past (including the original Jack Kirby-created foursome) that is really lovely and ties together the various revamps and relaunches, the newest of which was only a few years ago in the second or third wave of the New 52.

The creators do great work here, taking the very Silver Age concept and giving it a post-modern information-age twist, while honoring the long history of The Challs, a balance that is very hard to strike.  (Just look at many of the relaunched New 52 books, for instance.)  New Challengers #1 makes the best of a tough situation, with well-rendering and exciting art, an intriguing new wrinkle in the team’s premise and a fun mix of characters to do the titular challenging, earning 4 out of 5 stars overall.  I look forward to finding out more about this team, the new history of The Challengers and whether or not Prof is THE Prof or just someone with a tribute name…

Ties up multiple team incarnations with a clever premise, adds in some strong art and an interesting mix of characters to do Kirby's creations justice in a modern fashion...