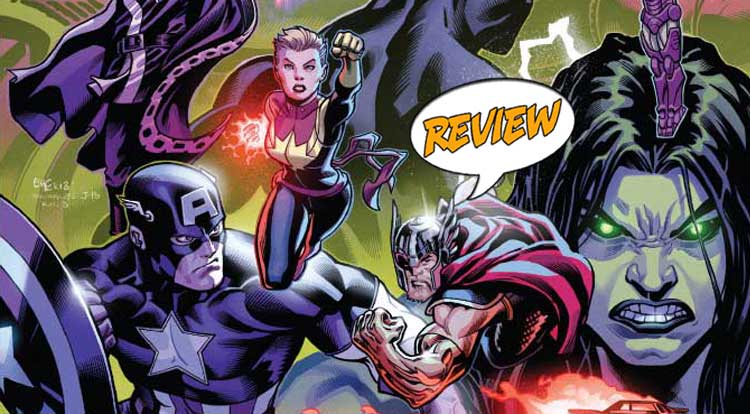 A new Celestial host has arrived, with no Avengers team to investigate or defend the world.  Good thing Loki’s around!  Your Major Spoilers review of Avengers #2 awaits! Previously in The Avengers: One million years ago, a group of proto-Avengers, led by Odin, defeated a Celestial who had set his sights on Earth, repelling the First Celestial Host and saving the world.  In the present, the bodies of Celestials are crashing to Earth, while a new Celestial Host invades, but The Avengers are no more…

As we saw last time around, The Celestials are attacking, but something strange is also afoot.  Captain America, Iron Man and Thor have united to fight the incoming giant cosmic alien giants and are quickly joined by Captain Marvel in her role as official protector of the Earth.  At the same time, Robbie “Ghost Rider” Reyes and Jennifer “Hulk formerly known as She-Hulk” Walters are investigating their own Celestial issues.  Jenn actually communicates with one of the fallen creatures, proving that they’re not actually dead, but when it transports her away for reasons unknown, she ends up in the Mighty Marvel Meet/Misunderstand/Fight cycle with the skull-headed racer.  There’s a brief reference to what Doctor Strange and Black Panther are up to beneath the Earth’s crust, but the bulk of this issue is spent on Hulk/Ghost Rider and “The Big Three” desperately trying and failing to combat the attacking Celestial Host.  The first-person narration is revealed on the last page to be that of Loki himself, echoing his role in the original assemblage of Avengers back in the day…

That Loki situation is actually kind of a bummer, because the solicits make a big point of tipping his presence, but the actual structure of the comic book is such that it was created to be a fun reveal.  Ed McGuinness does a particularly fun Loki, and his work on the Robbie/Jennifer fight is phenomenal, with Hulk smashing the hell out of his Charger, to no avail.  I also enjoy McGuinness’ Thor, especially after getting smacked down by a Celestial, and Captain Marvel both looks great and is written really well.  This issue’s plot doesn’t get much further in explanation but the spectacle of dying giants hurtling from the sky as backdrop for interpersonal conflict works for me, and I’m hoping to see Stephen and T’Challa’s excellent adventure next time around.  Looking at Avengers #2 back to back with the first issue, I find that my suspicions about the proverbial writing for the trade were correct, and that it seems like it will read better in a collection.  That said, this is a better single issue reading experience that the debut.

Having seen a lot of Avengers first arcs in my time (and one from before I was ever born), this issue makes a good showing for itself, but still isn’t the most dynamic kickoff for a new team of Earth’s Mightiest Heroes, but it ain’t bad.  Avengers #2 shifts the focus for positive results, with McGuiness keeping things more subdued than some of his previous work (*coughHulkcough*) which helps to ground the action (and make Iron Man look way cool), earning a better than average 3 out of 5 stars overall.  Had the Loki reveal been an actual reveal and not given away by the Previews catalog, it might have been a bit higher…

The focus shifts from the founders a bit, which helps to open up the book, and the use of Captain Marvel, Hulk and Loki is masterful...