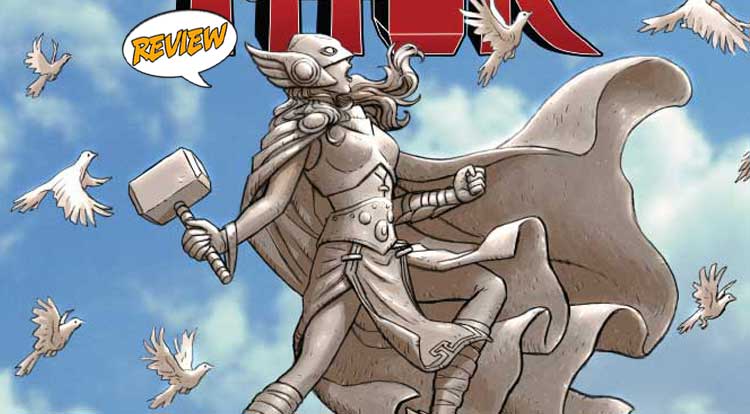 The Mighty Thor: At The Gates Of Valhalla #1 Review

Thor is dead.  Long live Thor! Your Major Spoilers review of The Mighty Thor: At The Gates Of Valhalla #1 awaits! Previously in The Mighty Thor: Jane Foster, The Mighty Thor, died saving the Asgardians from a monster called The Mangog.   But with the combined power of the Odinson, Odin and the Mother Storm (the sentient tempest that had inhabited Mjolnir), Jane came back to life.  Now she has a fighting chance against her cancer…  and the Odinson has a chance at worthiness as he regains his mantle.

I have to confess: I love Jane as Thor, so this issue was hard for me on a number of levels.  Thankfully, the solicitation copy from Marvel was particularly misleading in what actually happens here, as we open in the far future, with a heavily-medicated Thor snoring away in his throne room.  His three granddaughters, Frigg, Ellisiv and Atli spiked grampa’s mead in order to sneak away with a special time-travel maguffin and go joyriding to meet their inspiration.  Impulsive Atli demands to be transported to the “Golden Age of Thor”, leading to the three Thunder Goddesses battling trolls in the olden days.  A few more transport missteps (which amusingly lead to cameos by Thor-Frog and Dargo K’Tor, the Future Thor) and they find their quarry, a time when Thor was the most Thorriest of all.  Enter Jane Foster.

I love that reveal, and most of all, I love the art of Jen Bartels, who makes each girl’s personality clear from their weapons, body language and facial expressions, and delivers a shot of the most joyous Jane Foster in recent memory (after the Tomorrow Girls help her overcome a problem of her own.)

THE LORD OF THE REALMS

Our second story is much less upbeat, showing Malekith and Kurse as they prepare for war throughout the Ten Realms of Asgard.  Malekith is incredibly creepy in these pages, making his way from realm to realm, killing and sowing chaos, even working with Dario Agger of Roxxon to destroy the old gods of Vanaheim and let Agger strip it for its resources.  No evil is too small, from pride to deceit to cannibalism all the way to full-on chaos, and the issue ends with an invisible Mal spying on Jane Foster’s chemotherapy treatments while gloating that she is about to wish she had stayed dead.  Ramon Perez does great work on the art in these pages, making each realm unique and distinct, delivering with facial expressions both fearful and fearsome, and making the endless battle sequences unique as well.  I’m really worried about the upcoming ‘War Of The Realms’ after reading this chapter…

There are a couple of issues with this book that keep cropping up at Marvel of late, in that these emotional moments and dreadful portents could easily have appeared in Thor’s own upcoming relaunched title.  Forcing readers to buy an extra five-dollar comic in between the Jane’s renumbered comic and Odinson’s new #1 feels very mercenary from a reader standpoint, but I have to say that the quality of the material makes is worth even the elevated price.  The Mighty Thor: At The Gates Of Valhalla #1 is a good read, providing a capper for the era (or, as the future girls subtly mention, the first era) of Jane-as-Thor, while teasing the new series with ominous evil doings with art that makes it all really sing, earning 4.5 out of 5 stars overall.  I can’t tell you how glad I am that Jane survived and that Aaron’s take on Asgard isn’t going away just yet…